Why Good News/Bad News for the Middle Class?

Olga, WA – If you’re baffled by the latest good news/bad news for the American middle class – word that in 2015 typical family income got its best boost in five decades, but families are still worse off than in 2007, just think about trickle-down economics and how it works.

During an economic recovery, the modern U.S. business model of trickle-down capitalism focuses first on delivering corporate profits, then soaring stock prices on Wall Street and big stock bonuses for CEOs and corporate execs. And if the recovery goes on long enough, some of the nation’s income gains eventually trickle down to rank-and-file workers.

So that finally happened in 2015. It’s an important milestone worth cheering that last year, families smack in the middle of the middle class saw their household incomes rise by 5.2% to $56,516, according to the U.S. Census Bureau. 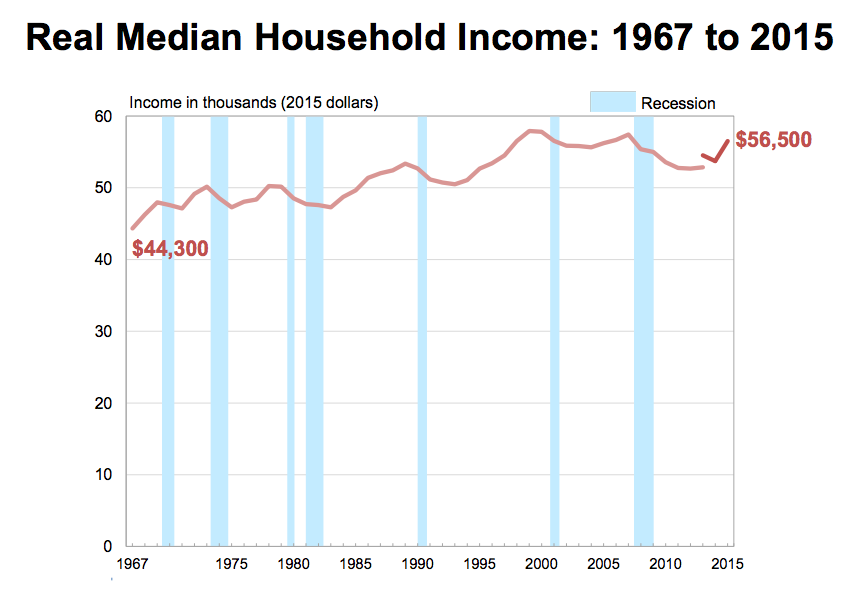 But what’s disturbing is that this took so long to happen. This was the first increase in median family income since 2007, the first in eight years. And even with the nice one-year gain, that dismal record left the typical American family worse off in 2015 than in 2007 (median income $57,435) and also worse off than in 1999.

What Drives Inequality Is the U.S. Business Model

That sweet and sour economic paradox fuels the clashing economic visions of Hillary Clinton’s buoyant optimism and Donald Trump’s nightmarish gloom. Both play upon the pretense in American elections that choosing the right president will magically fix the nation’s wide economic problems.

While public policy does play a role today in amplifying economic inequality in America with low taxes on the rich and a frozen minimum wage, the good news/bad news scenario that now plagues the middle class is much less the product of presidential policies and much more the result of the private sector trickle-down business model. In the economy, the power to divvy  up the nation’s economic pie lies in the hands of Corporate CEOs and small business owners who reward themselves and their shareholders first, while cutting jobs, moving plants overseas and freezing the pay of average employees. 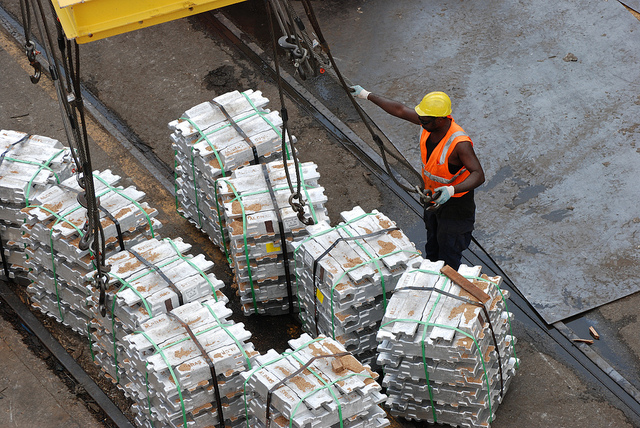 The breakthrough for the middle class comes when unemployment finally drops down near 5% and economic growth pulls the jobless and the poor off the sidelines into the workforce. The Census Bureau numbers tell that story. In 2015, the economy added 3 million full-time and part-time workers and it lifted 3.5 million Americans out of poverty. What’s more, the Census Bureau found that the increase in family incomes spread all across the board – to all regions of the country and among Hispanics and African Americans as well as among whites.

No wonder that President Obama was out on the hustings trumpeting the $2,800 increase in typical family income last year. “This is actually the largest jump, year over year, in incomes since 1968,” Obama declared. “And the good news is that it went up for everybody, all income groups, except those at the very, very top.”

The New Economics – “Profits Without Prosperity”

But unless the job market gains further momentum, there are several reasons for doubting that the positive spurt in 2015 signals an enduring upswing for the middle class, which has been suffering sine the late 1970s form “wedge economics” – a wedge driven between the nation’s economic growth and the middle class standard of living.

First of all, in recent decades, CEOs and corporate boards have reinvested far less of their corporate profits on growth, including R&D and higher pay and training for employees, than on stock dividends and buybacks that profit Wall Street investors, according to an article in Harvard Business Review by economist William Lazonick.

Under the telling headline, “Profits without Prosperity,” Lazonick reported that in the 1950s and ‘60s major U.S. companies plowed close to 50% of their profits into corporate growth – R&D on new products, expansion, retraining workers and paying them more, but by the 2000s they reinvested only 9% because they were paying out 91% of their profits to shareholders, including their own corporate elite. 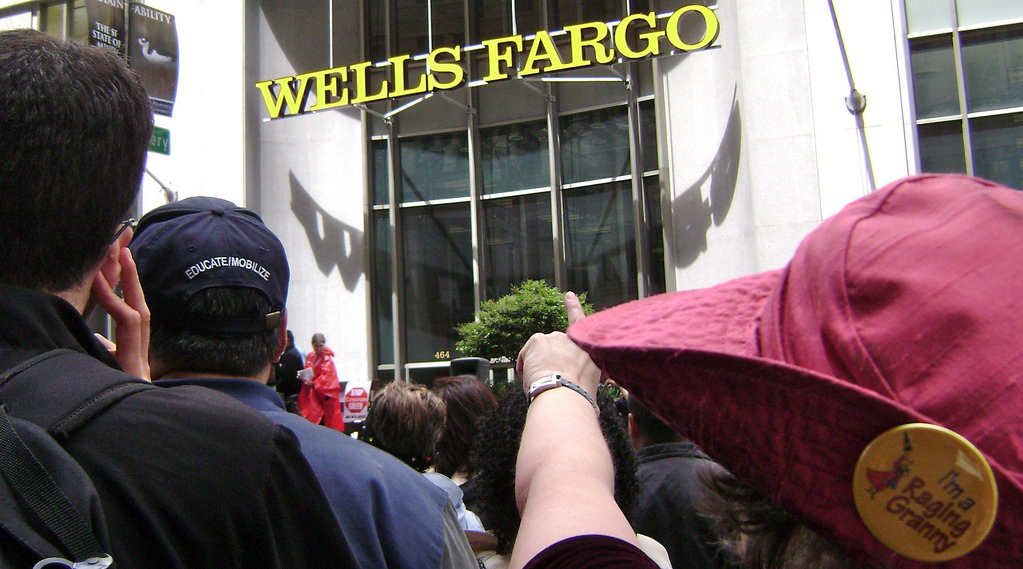 In that same trickle-down pattern, it turns out that as CEO of Wells Fargo bank John Stumpf made up to $200 million in stock profits  in a decade while the bank’s community banking division boosted bank profits by creating two million fake accounts and credit cards without customer approval. The practice went on for years and finally, Wells Fargo blamed rank-and-file employees for the scam and fired 5,300 of them but bank executives absolved themselves of blame. In fact, the bank’s board awarded Carrie Toldstedt, longtime head of its community banking division, with a near $100-million retirement package.

Now, the California Attorney General’s office has launched a criminal investigation into whether the bank violated the law by accessing customer ID information in order to create  the bogus accounts. In a 14-page court affidavit, Special Agent Supervisor James Hirt said that “there is probable cause to believe that employees of Wells Fargo Bank unlawfully accessed the bank’s computer system to obtain the PII (personal identifying information) of customers” and then used that illegally obtained information “to commit false impersonation and identity theft by opening unauthorized accounts, credit cards and various other products that resulted in the accumulation of fees and charges for Wells Fargo,.”

In September, the U.S. Senate Banking Committee and House Financial Services Committee  sharply chastised then- CEO John Stumpf.. When Democratic Senator Elizabeth Warren of Massachusetts asked whether Wells Fargo had “paid back one nickel” of its improper fees or “fired any senior management” over the customer scam, Stumpf blurted out a “No.”  Waving a sheaf of Wells Fargo documents, Warren calculated that Stumpf had personally made about $200 million in stock gains and called on him to resign and repay his gains. Belatedly, the Wells Fargo Board clawed back $41 million of Stumpf’s stock options and $19 million from community banking division director Carrie Tolstedt. The bank paid a $185 million fine to the Consumer Financial Protection Bureau and refunded $2.6 million to customers.

But angry critics were not satisfied. California State Treasurer John Chiang imposed a financial penalty by barring Wells Fargo from participating in lucrative municipal bond offerings and other state business. The city of Chicago did the same. Senator Bernie Sanders of Vermont derided the unfairness of bank executives getting off free while employees were fired and groups of former Wells Fargo employees filed lawsuits charging that those who had refused to go along with creating fake accounts and had protested to superiors were unfairly terminated.

In these suits, former employees like Julie Tishkoff said they had protested to their bosses as far back as 2005, when Stumpf became Wells Fargo’s President, that they had seen other employees’ opening sham accounts and forging customer signatures, but the bosses paid no attention, In fact, two supervisors who received complaints and took no action and were promoted to serve as regional bank regional presidents. Then suddenly, in mid-October, Stumpf resigned.  He  got no golden parachute separation package, but still walked off with a $20 million pension, $4.3 million ind deferred compensation, plus stock estimated to be worth $100 million. 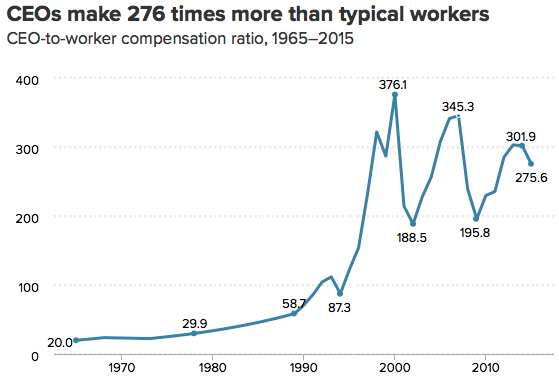 More broadly, CEO pay has skyrocketed while worker pay has stagnated. In the 1950s to 1970s, the heyday of the middle class, CEOs of major companies made 20-25 times the pay of average workers, but in 2015, that pay ratio had soared to 276-1, according to Commerce Department data reported by the Economic Policy Institute in Washington.

In 2015, The New York Times found that CEOs at the 200 largest companies averaged $19.3 million – making more pay in one day than the average working family – often a couple – makes in an entire year.

Gridlock in Congress and the Decline of Unions

Another reason for the painfully sluggish gains in average worker pay is the decline of the labor movement. In the 1950s, roughly one-third of America’s private sector workers were members of trade unions and the contracts negotiated by big unions like the United Auto Workers and the United Steelworkers established pay and benefit standards for companies across the economy, even those without unions. With strong unions, the rising tide of economic growth did indeed lift all boats.

Now, with union membership down to 11% of the U.S. workforce and most unions in a weak bargaining position, a recent study by Economic Policy Institute found evidence that pay levels for non-union workers suffered, especially for men who lack a college degree. If unions today were as strong as in 1979, the study found, high school-educated non-union workers would be making $50 more per week – $2,600 a year.

Finally, the tide of 11 million illegal immigrants coupled with the refusal of Congress to raise the federal minimum wage since 2009 has kept downward pressure on middle class wages or at least made it hard for pay to move upward. Economists report that by contrast, whenever the nation’s minimum wage is raised, that tends to push up pay levels further up the income ladder.

In fact, one potential contributor to the middle class gains in 2015 is that in the last few years 29 states covering 60% of the nation’s workforce have boosted their state minimum wage floors above the federal level of $7.25 an hour, with California and New York escalating to $15 an hour over the next four or five years. Those state actions help move middle class wages upward.

To sustain these trends and generate a higher middle class standard of living, the nation needs continuing job growth that pushes employers to hire more and pay more. “If working-age Americans are going to get ahead, it is through a paycheck,” comments economist Jared Bernstein, a former adviser to Vice President Joe Biden. “This shows the importance of robust labor markets.”