Citizens United:
Trigger for Progressive Reforms
Get More Resources On This Topic    ▾

In January 2010, when the Supreme Court issued its 5-4 decision in the Citizens United case, allowing unlimited campaign contributions by corporations and unions, Justice John Paul Stevens warned in his dissent that this decision “unleashes the floodgates” to a Niagara of corporate money into U.S. elections.

Stevens was right. In the first year after Citizens United, outside campaign spending by SuperPACs and other sources, rocketed from $8.8 million in 2009 to $301 million in 2010, and then to $1 billion in the 2011-12 cycle, according to the Center for Responsive Politics, which tracks political money. By the 2015-16 cycle, SuperPAC and independent spending hit $1,436,195,691 – an unimaginable sum before Citizens United.

The stunning sums involved have put a premium on a new high-profile class of elite MegaDonors. Like the Robber Baron era of the late 19th Century, a small cadre of billionaires dominates America’s new MoneyPolitics. In 2016, the top 100 donors accounted for nearly 70% of all funds spent by SuperPACs.

The impact of that tsunami of cash was huge, especially in congressional elections. As early as May, six months before Election Day, SuperPACs had targeted $160 million on the battle for control of the U.S. Senate in states like Illinois, Ohio, New Hampshire, Pennsylvania, Wisconsin, and Florida.

In congressional primaries, MegaMoney was a big factor. In Senate primary races, nine out of ten winners had a MegaMoney advantage. The only financial underdog to win, Democrat Katie McGinty, had a hefty war chest – $4.1 million to $4.8 million for her opponent.  In House primaries, 93 winners typically had much more cash to spend than the losers. Only 14 financial underdogs won, according to U.S PIRG – the Public Interest Research Group.

This skyrocketing explosion of campaign MegaMoney has triggered a powerful backlash – a grassroots reaction of average Americans who fear that our democracy has been endangered by Citizens United and other Supreme Court decisions that have equated political money with free speech and paired the rights of corporations to pour unlimited money into campaigns with the First Amendment rights of individual citizens.

In a series of decisions, the Supreme Court has largely eviscerated laws passed by Congress in the 1970s and extended in 2002 to try to put some reasonable restraints on campaign donations and spending.

Members of Congress on both sides of the aisle have erupted in anger and frustration. Arizona’s Republican Senator John McCain, co-author of a 2002 law limiting campaign spending, lashed out at the nation’s high court, calling Citizens United “the worst decision of the United States Supreme Court in the 21st century.”

Vermont’s Senator Bernie Sanders, a liberal independent, called for We the People to take action: “There comes a time when an issue is so important that the only way to address it is by a constitutional amendment.”

Justice Stephens, now retired, joined the chorus calling for a constitutional amendment to restore the power of Congress and individual states to set “reasonable limits on the amount of money that candidates for public office, or their supporters, may spend in election campaigns.” 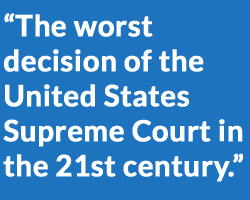 One Amendment Took Over 200 Years

But amending the Constitution is not easy. The Founding Fathers deliberately made it hard. In more than 200 years, the Constitution has been amended only 27 times – the first ten amendments coming in the Bill of Rights in 1791, and only 17 more amendments in the next 223 years.

The most recent amendment was enacted in 1992. It barred members of Congress from passing laws to raise their own pay and required them to win re-election to qualify for the pay raise. But that amendment took forever. It was written two centuries ago, passed by Congress, and sent to the states for ratification on September 25, 1789. But then this amendment lay dormant for nearly 200 years (!) until a college student discovered the long lost amendment, surfaced it in public, and worked personally to garner the support of more than 30 state legislatures.

On the other hand, the Equal Rights Amendment (ERA) for women’s rights failed to make it all the way, partly because time ran out. ERA passed the House in 1971 and the Senate in 1972 and quickly won the support of 30 states before the end of 1973. But a concerted drive by opposition groups stalled action in several states and ultimately blocked enactment of the ERA by a sufficient number of the states within the seven-year deadline set by Congress. And so the amendment died – unratified.

Amend Either Top-Down or Bottom-Up 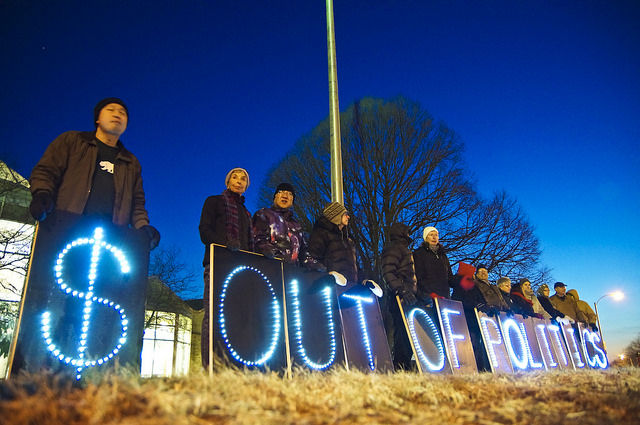 There are actually two ways to amend the Constitution – either top-down or bottom-up, which means either started by Congress or started by the states.

So far, all 17 amendments enacted since the Bill of Rights have been set in motion through the top-down process, starting with two-thirds majority votes in both the House and Senate. After Congress acted, the proposed amendment was then sent to the states for ratification. At least three-fourths of the states (38 at present) must approve for the amendment to be added to the Constitution.

But Article V of the Constitution also provides for a bottom-up approach, giving the states the power to take the initiative when Congress won’t move first. “On the application of the legislatures of two-thirds of the several states (34 at present),” Article V declares, Congress “shall call a convention for proposing amendments” to the Constitution. If the convention agrees on a specific amendment or amendments, it must still be ratified by three-quarters of the states.

It is that states-first provision that has spawned action at the grassroots in favor of a constitutional amendment. So far, 16 states and more than 500 cities and towns have officially gone on record in favor of an amendment to the Constitution, either through popular referendum, legislative action, or collective letters signed by their legislative and elected leaders.

Two states – Vermont and California – have gone one step further. They have officially begun the formal process of moving toward a constitutional convention. Their legislatures have adopted resolutions that, if passed by enough other states, would force Congress to convene an Article V constitutional convention for the purpose of drafting an amendment to control campaign spending.

While the language varies from state to state, the common purpose is aimed at overturning the Citizens United decision and explicitly granting the power to Congress to regulate campaign spending and donations.

Fairly typical was the statewide ballot initiative passed by a 74.0 percent majority of voters in Colorado in November 2012, which instructed the state’s Congressional delegation to propose and support “an amendment to the U.S. Constitution that allows Congress and the states to limit campaign contributions and spending, to ensure that all citizens, regardless of wealth, can express their views to one another and their government on a level playing field.” 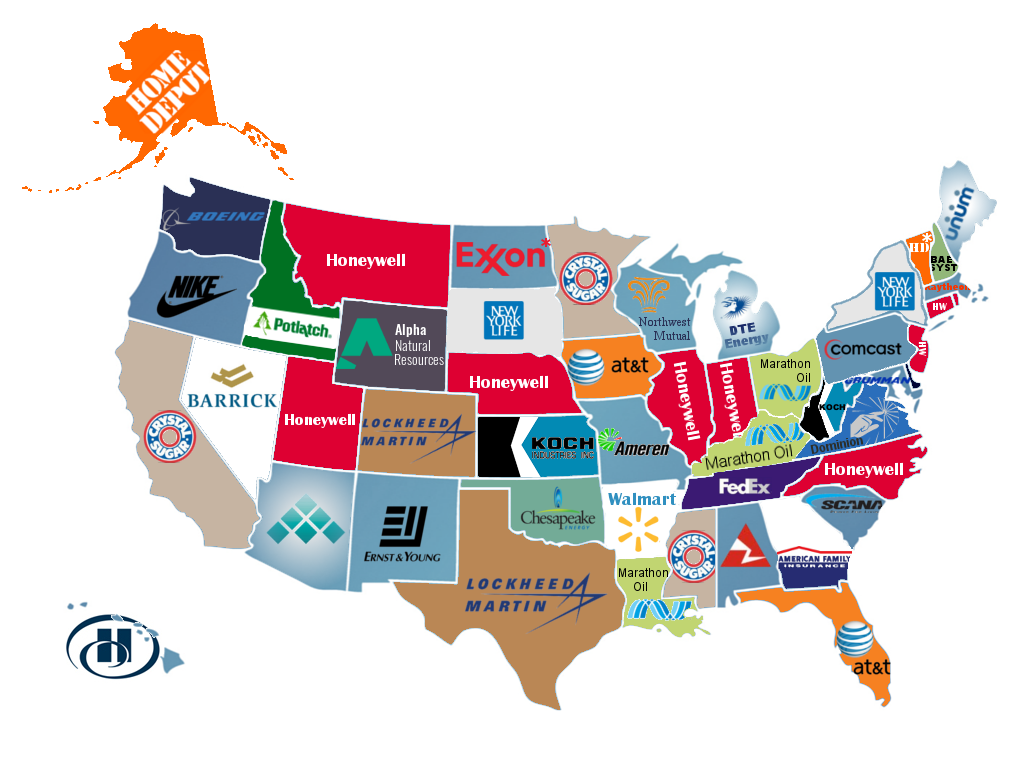 U.S. PIRG map of top corporate contributors to elections in each state during 2015.

Big Money Muscles in on the States

Other states, too, feel the muscle of Big Money. The Public Interest Research Group (US-PIRG) reports a mounting tide of outside corporate money targeted at state-level races – Lockheed-Martin in Texas and Colorado; Nike in Oregon; AT&T in Florida and Iowa; Home Depot in Alaska; Koch Industries in Kansas and West Virginia; Fedex in Tennessee; Microsoft, Exxon-Mobile and Koch in North Dakota; Honeywell in a slew of states from New Jersey, North Carolina, and Indiana to Nebraska, Utah, and Montana, all seeking to tilt congressional races and key state races in favor of business.

In Congress: A Majority But Not the Needed Super Majority

In Congress, efforts are underway to restrain this avalanche of campaign spending. There are thirty proposals calling for a Constitutional amendment. The measure with the most co-sponsors is a resolution authored by Democratic Senator Tom Udall of New Mexico.

This amendment would grant Congress and the states the power to “regulate and set reasonable limits on the raising and spending of money by candidates and others to influence elections,”  as well as the authority  to bar “corporations or other artificial entities created by law…from spending money to influence elections.”

On September 11, 2014, the Udall amendment got a test vote. The proposal won a 54-42 majority, but solid Republican opposition kept it from getting the 60 votes necessary to break a procedural filibuster and send the issue to the Senate floor, initiating substantive debate of a constitutional amendment to curb campaign spending. All 54 “Yes” votes came from Democrats. All 42 “No” votes came from Republicans.

Given the partisan warfare in Congress, few political analysts see much chance of a constitutional amendment resolution gaining the necessary two-thirds majority in the two houses of Congress, without a very powerful groundswell of popular demand our across the country. That throws the initiative to the states to take action either through popular vote initiatives or legislatures’ calling on Congress to summon a constitutional convention. 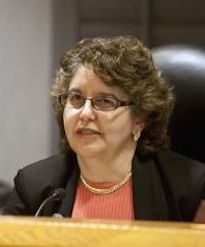 But in March 2016, Ellen Weintraub, a 13-year member of the Federal Election Commission, pointed to another avenue – targeting a vital hole in the Supreme Court’s Citizens United decision. In that ruling, the court found that corporations are “associations of citizens” entitled to the constitutional right of assembly and participation in U.S. elections. But Commissioner Weintraub noted that many U.S. corporations have foreign stockholders but foreigners are specifically barred by law from making campaign contributions, as are companies that enjoy government contracts.

“It defies logic to allow groups of foreigners, or foreigners in combination with American citizens, to fund political spending through corporations,” Weintraub wrote in a New York Times oped. “Arguably, then, for a corporation to make political contributions legally, it may not have any shareholders who are foreigners or contractors.”

But nobody has dealt with that. The Federal Communications Commission, she noted, bars broadcast licenses to any company that is than 20 percent foreign-owned. Weintraub is pushing the Federal Elections Commission to block foreigners from funding U.S. campaigns. via U.S. corporations. But since she knows the FEC is paralyzed by partisan gridlock, her high-profile oped seems to invite a lawsuit or a crackdown by the Justice Department. “American billionaires already have an outsize influence on our elections,” Ms. Weintraub notes. “Let’s not cede yet more power to foreign elites.”