The Democracy Rebellion:
Videos of People Power in Action

It’s no secret that millions of Americans are fed up with politicians rigging elections, at voter suppression, at the power of MegaDonors moving their millions through dark channels to swing elections and buy influence in  Congress and at the White House. What’s not known is the counter-narrative: That grassroots citizen movements have sprung up from Maine to Montana, from North Carolina to North Dakota, from Florida and Virginia to Arizona and Utah, been winning fixes for our political system to make American elections fairer, more transparent and more inclusive.

It’s what we call THE DEMOCRACY REBELLION. It’s the missing story of American politics. Not Washington, but grassroots America. Not stale gridlock, but fresh reforms. Not partisan combat, but hands across party lines. Not negative ads and mega-donors, but positive change and citizen activists pressing for gerrymandering reform and voting rights for former felons, exposing dark money, and winning surprising victories to make our elections fairer, more transparent, and more inclusive.

In January, PBS offered THE DEMOCRACY REBELLION to its audiences nationwide and our film rolled across the country this spring. Now it’s posted on our YouTube Channel and you can se it anytime you want. Enjoy it. It will warm your heart and lift your spirits to see the power of WethePeople in action. You can click on the video below and see the whole film, or scroll down the page and see shorter segments, showing individual stories in different states. 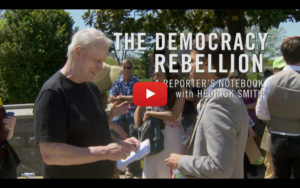 Correspondent Hedrick Smith spent three years crisscrossing America, discovering how average Americans were coming of the sidelines and challenging the power elite. Citizen movements didn’t always win victories for reform right away. Some of them had to try two or three times – in Florida, six times – to change a political status quo stacked by the power brokers for themselves. Smith came away, impressed and amazed at the commitment, the tenacity, and the idealism of political amateurs who learned that they go into the arena and beat the pros. Have a look and pick your own favorite grassroots heroes.

“Citizens United” touched off a mass revolt. When people saw billionaire and corporate money flooding campaigns and SuperPAC spending skyrocketing, they rebelled. More than 800 local governments and 20 states called for a US constitutional amendment to roll back the Supreme Court’s “Citizens United” decision.

In state after state, political novices like Cindy Black mobilized. “We do not believe that corporations are people,” Black declared. “We do not believe money is speech.” Black led the citizen movement in Washington State that was a model of grassroots democracy in action. It mobilized a solid 63% cross-partisan majority vote to reject “Citizens United.”

The covert power of dark money has become the hallmark of modern American politics since the Supreme Court’s “Citizens United” decision in 2010. The super-rich and corporations buy backdoor influence using political nonprofits with innocuous names that mask the true identity of who’s pulling the strings.

But in 2012, California’s election watchdog agency went after one of the biggest, boldest dark money networks, run by the Koch Brothers, and wound up exposing some of the California elite – Bob Fisher, CEO of the Gap; Mega-Investor Charles Schwab, and LA philanthropist Eli Broad. Then California beefed up its financial disclosure rules and now runs a web list of each campaign’s top ten donors.

Uprising on the Prairie

Segment #3 – Uprising on the Prairie

Populist rebellion has deep roots in the Dakotas. In 1898, South Dakota became the first state to grant voters the power to pass laws through popular ballot initiatives. Now 26 states have that option. In 2016, TakeItBack.org, a grassroots movement, challenged the political establishment with three ballot reforms. To everyone’s surprise, voters adopted public funding of campaigns. Republican political leaders were shocked. They declared an emergency and nullified the popular vote, setting off a  new confrontation in the 2018 election.

How to Beat Big Money

Segment #4 – How to Beat Big Money

One way to break the power of big campaign donors and political lobbyists is public funding of campaigns, which was used for two decades in Presidential elections, from 1976 to 1996. Now, public campaign funding has shifted to the states. In Connecticut, home to a bold, model program, roughly 80% of candidates from both major parties running for Governor, statewide offices, and state legislature currently use public funding. To qualify, candidates have to prove viable public support by raising a good-sized quota of small donations from local voters.

The program has transformed the political landscape. More minority candidates and women can afford to run for office – and often win. Fat-cat lobbyists have less power. The policy agenda has changed because the demographics of the legislature have changed: Lawmakers look, think and act more like average voters

The battle over who gets to vote has sharpened in recent years, with some states making it easier with same-day and motor-voter registration at DMVs, and other states making it harder with strict photo ID laws that disproportionately affect minorities, students, and older people.

North Carolina is a major battleground. After the GOP-led legislature enacted a strict photo ID law, the Moral Monday movement, led by Rev. William Barber, went to war in court and on the streets. A federal court struck down the state’s photo ID law as unconstitutional, but Republican lawmakers are trying to restore it through a constitutional referendum.

How to Unrig Elections

Segment #6 – How to Unrig Elections

Rigging elections is an old game in American politics. Voters are finally waking up to how politicians stack the deck by manipulating election district maps. Now, We the People demand reform.

What Florida did in 2010 was amazing. Florida voters made it unconstitutional for politicians to gerrymander election maps to favor one party or to protect incumbents. And when the legislature cheated, reformers took lawmakers to court and won a thundering decision.

Other states simply take redistricting election maps away from politicians and turn it over to independent bipartisan commissions with less of an ax to grind. Take your pick, but it’s critical to take action to give voters a real choice in elections.