What’s the Outlook for American Democracy?

The fate of our Democracy is on the ballot this fall. The crucial test is whether a Constitutional coalition of Democrats, independents and Liz Cheney Republicans can stop the Trump attempt to win major offices and take control of running future elections in battleground states.

The media treats the 2022 campaign as a rerun of the traditional Red vs Blue, mid-term election where the in-party takes a shellacking and loses control of Congress. But smart voters know the stakes this year are much higher.

That’s because the Trump faction  – operating as a third force –  has its own special agenda. Masquerading as the Republican Party,  Trump candidates are running for high office in a dozen states, soft-pedaling their stealth strategy to capture control of the election machinery in swing states so they can lock in Trump’s return to the presidency in 2024. 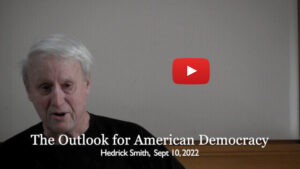 One stumbling block for them is the Liz Cheney Republicans – the 20 million Republicans who reject Trump’s false claim of a stolen election in 2020. Defections by some of those Republican voters helped defeat Trump in 2020 and recently torpedoed a Trump candidate in Alaska last month.

So a coalition of Democrats, independents and Liz Cheney Republicans can muster a winning majority to stymy the Trump agenda and protect the fair U.S. elections in the future.

For a  unique take on the 2022 elections and beyond, click on the photo above.

We need help and we’d be grateful for your support to help cover our  technical, video and research  costs and services from Google, Facebook, MailChimp, Orcas Online and others. You can make a tax deductible donation to our 501(c)3 nonprofit, reclaimtheamericandream.org by clicking on this DONATE button.