In modern American politics, the first omen that “dark money” was corrupting American democracy were revelations that bundles of cash and checks were being delivered in brown paper bags and suitcases to President Richard Nixon’s re-election campaign in 1972.

In a few short weeks, CREEP, as the Committee for the Re-Election of the President was called, hauled in roughly $20 million – $100 million in today’s dollars – half of it from a handful of super donors.

That river of money all moved in secret, rushed to campaign operatives to beat the imminent deadline for disclosure of campaign contributions set by the new Federal Election Campaign Act of 1971. After the secret Nixon slush fund was exposed, Congress tightened campaign laws again in 1974, setting spending limits and providing public funding for presidential campaigns.

Disclosure as the Disinfectant for Tainted Money

But the foundation stone of campaign reform, then as now, was disclosure – transparent openness about the sources of political money. Full disclosure was the disinfectant prescribed in the Nixon era to kill the epidemic of tainted money and to cleanse the nation’s political system. 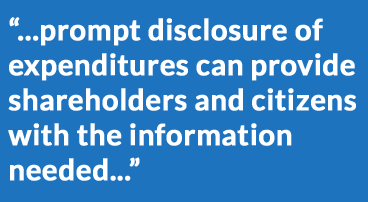 In the decades since then, disclosure has been the one campaign reform that has won general endorsement from conservatives as well as liberals and moderates. George Will, the conservative columnist, once condensed their concept into “Seven words – No cash, full disclosure, no foreign money.”

Full disclosure was also the linchpin of the Supreme Court’s Citizens United decision that in 2010 overturned a century of federal legal controls on campaign spending. Justice Anthony Kennedy, writing for the majority, sanctioned unlimited spending by corporations and unions but placed the full burden of protecting the integrity of American democracy from the corruption by Mega Money on total transparency. “With the advance of the Internet,” Kennedy wrote, “prompt disclosure of expenditures can provide (corporate) shareholders and citizens with the information needed to hold corporations and elected officials accountable.”

But there was a fundamental flaw in Justice Kennedy’s legal reasoning. He was light-years away from political reality, because no system of full disclosure exists today, either in law or in regulations. In fact, the laws, as officially interpreted, actually protect the anonymity of many of the richest campaign donors, corporate as well as individual.

Half a Billion in Dark Money

As a result, politically active billionaires and nonprofit groups that raise huge sums of corporate money but keep their funding channels secret poured roughly half a billion of untraceable dollars into the campaigns of 2012 and 2014, according to the Center for Responsive Politics, using data from the Federal Election Commission.

So pivotal is the impact of dark money, The New York Times warned that after the 2014 elections: “The next Senate was just elected on the greatest wave of secret, special-interest money ever raised in a congressional election.”

Campaign spending by groups that keep their donor lists totally secret skyrocketed from $5.2 million in 2006 to $308.7 million during the 2012 presidential elections and $174 million in the 2014 mid-term elections, according to the Center for Responsive Politics. What’s more, the Center says, the actual dark money total is much higher because it does not count the groups that disclose some of the donors but not all of them.

Watering Down the Law

The Federal Elections Campaign Act of 1971 was designed precisely to prevent dark money. For the first time in American history, it not only required full disclosure of campaign donations to political candidates and parties, but it insisted on timely disclosure during the campaigns, so that voters could see who was funding candidates before casting their ballots.

Donations to candidates and parties must still be disclosed today. But that law has been steadily watered down, re-interpreted, and circumvented so that the super-rich and powerful corporate and financial interests flout the principle of full transparency.

The Supreme Court, in a series of decisions, has fostered the explosion of dark money by reversing the century-old legal ban against corporations and labor unions using general revenues in election campaigns; by turning a blind eye to obvious close ties between political candidates and their Siamese-Twin supposedly “independent” backer groups; and by sanctioning ad campaigns once forbidden by law, for and against candidates by corporations and so-called “independent” groups.

From “Social Welfare” to Campaign Warfare

Strangely, for all the media scrutiny of powerful Super PACs, they are not the main cause of the dark money geyser. By law, Super PACs must disclose their donors. It is tax-exempt “501 C” non-profit groups, which get their nickname from the sub-paragraphs of the U.S. tax code applying to them, that are the main conduits for the modern flood of dark money.

Business trade associations like the U.S. Chamber of Commerce and certain labor organizations have long enjoyed 501 C status but only in recent years have they spent aggressively on campaigns while shielding the identity of their donors. 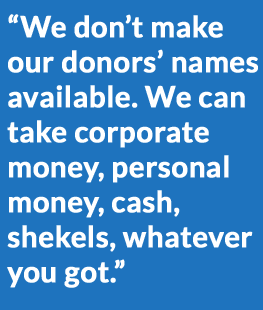 By far the largest and most potent channels of dark money are so-called 501(c) (4) “social welfare” organizations, a category that began with Boy Scouts, Girl Scouts, and other general-purpose non-profits with little interest in politics. But from 2010 onward, the Internal Revenue Service reported a surge in a push for tax-exempt status from political advocacy nonprofits with secret donor lists. And, notably in election years, the number of new 501(c) (4) nonprofits approved by the IRS more than tripled from 1,202 in 2008 to 4,114 in 2014.

Lying to Get Tax Exemptions

The gaping loophole for political advocacy nonprofits turns on a rubbery interpretation of the law. In 1913, Congress voted to grant tax-exempt status to certain nonprofits so long as they were “operated exclusively for the promotion of the social welfare.”

But in 1959, the Internal Revenue Service watered down that language, saying only that these groups “must operate primarily” to promote “the general welfare,” and it never defined “primarily.” So today, political advocacy non-profits claim that they can devote up to 49.9% of their resources to politics – and experts suggest that some actually go much further.

In qualifying for precious tax-exempt 501 (c ) 4 status, many groups have simply misled the IRS. In 2012, ProPublica, a public interest news service, found documentary evidence that at least 32 social welfare groups told the government one thing and did the opposite. When asked if they intended to engage in politics, they checked the “no” box on their applications. But later, their reports to the Federal Election Commission, showed they had broken their promise and spent heavily on campaigns.

In one case, Pro-Publica reported, the Republican Jewish Coalition, backed by billionaire casino magnate Sheldon Adelson, denied any intention to engage in politics but then proceeded to solicit funds for a $6.5 million political ad campaign in 2012 to back Mitt Romney against President Obama. ProPublica quoted RJC fundraiser Matt Brooks’ telling one group at a New York law office: “Contributions to the RJC are not reported. We don’t make our donors’ names available. We can take corporate money, personal money, cash, shekels, whatever you got.”

Dark Money Shoots Through the Roof

More broadly, ProPublica found that many “social welfare” nonprofits told the I.R.S. that they spent far less on political campaigns than what they reported to the Federal Election Commission. Some groups told the F.E.C. that they had spent funds on attacking or supporting political candidates, but in reports to the I.R.S., they called those expenditures “public education” or” issue advocacy.”

It was in the 2011-12 campaign cycle that the explosion of 501(C )4 dark money went through the roof, cut loose by Supreme Court rulings. It shot up to well over $300 million. 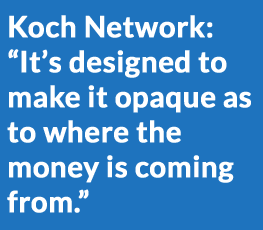 More than $150 million, much of it spent on TV ad blitzes against President Obama, came from just two dark money channels, according to the Center for Responsive Politics. The big two were Crossroads GPS, run by former Bush White House political mastermind Karl Rove, and the secretive money network founded by the conservative billionaire brothers David and Charles Koch whose flagship “social welfare” group is Americans for Prosperity.

In 2014, Super PACs worked a new wrinkle to mask some of their donors’ identities – by operating with 501(c ) 4 nonprofits like Russian nesting dolls, one inside the other. Instead of taking money directly from donors and then revealing their identities on campaign reports to the F.E.C., some SuperPACs had their donors channel megabucks through a chain of “social welfare” groups so that individuals’ names would never show up on SuperPAC campaign reports.

In the 2016 campaign, Mega-Donors concocted a new channel for funneling mystery money donations to candidate Super PACs through LLCs – limited liability corporations, businesses that leave no paper trail and mask their funders.  In one case, Brooklyn investor Andrew Duncan admitted to the Associated Press that he has passed a $500,000 donation to a Marco Rubio super PAC through IGX LLC. But dozens of other donors kept their identities secret in the rising flow of anonymous donations moving through LLCs to Super PACs, highlighted by watchdog groups such as the Campaign Legal Center, Center for Public Integrity, the Sunlight Foundation, charging election law violations. 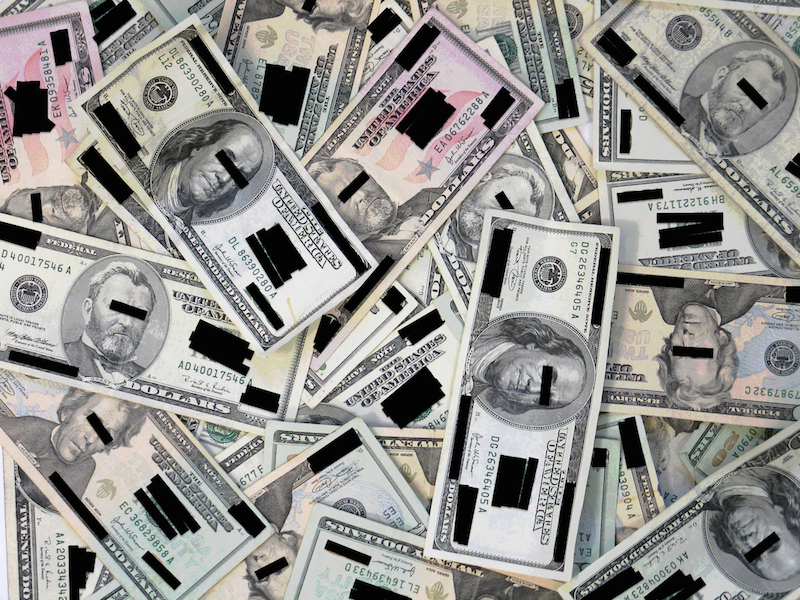 The labyrinth of funding groups organized by the Koch brothers has become virtually impenetrable for regulators. “It is a very sophisticated and complicated structure,” Notre Dame law professor Lloyd Hitoshi Mayer, told The Washington Post. “It’s designed to make it opaque as to where the money is coming from and where the money is going.”

Crossroads GPS, and its affiliated SuperPAC, American Crossroads, spent another $50 million, helping to swing key Senate races in Colorado and Alaska for Republicans. The U.S. Chamber of Commerce, also keeping its donors secret, kicked in another $35.4 million behind the Republican cause.

In short, massive injections of dark money have torpedoed campaign disclosure laws, leaving American voters literally in the dark, unable to find out who funded whom to get what – unless average voters get mobilized and insist on strong disclosure rules in a hurry.