Getting an Economic Shot in the Arm

Americans may disagree on many issues, but all across the political spectrum, solid majorities of Republicans (63%), Independents (80%), and Democrats (90%) agree that the U.S. economy is unfairly tilted in favor of the wealthy. Even Tea Party Republicans (52%) agree.

What’s more, three-quarters of Americans, again across all major political factions, favor raising the minimum wage as a way to reduce the nation’s gaping inequalities. And while Congress is gridlocked on that issue, more than half of the 50 states have already boosted their minimums above the federal level.

To start catching up, President Obama proposed increasing the federal minimum to $10.10 in three steps. ee But Republicans in Congress blocked any action on the minimum, in sharp contrast to earlier periods when raising the minimum wage regularly won strong bipartisan support, from Republicans as well as Democrats. In his campaign, Donald Trump promised a better deal for working Americans but as President ducked the minimum age issue.

Massachusetts pioneered the idea of setting a legal minimum wage and was soon followed by 14 other states. When its legality was challenged by a business lawsuit, the U.S. Supreme Court resolved the issue in 1937 by upholding the constitutionality of minimum wage laws. 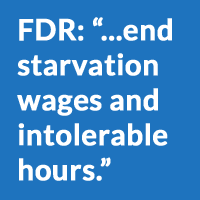 Within two months President Franklin Delano Roosevelt sent Congress his Fair Labor Standards bill that called for a federal minimum wage, a ban on child labor, and a maximum work-week of 44 hours. It was time, Roosevelt declared, for America to give “all our able-bodied working men and women a fair day’s pay for a fair day’s work.”

When Congress stalled, FDR stepped up the pressure in his 1938 State of the Union Address. Congress, he thundered, must enact legislation “to end starvation wages and intolerable hours.” That June, Congress approved the first federal minimum wage of 25-cents an hour (equal to $4.06 today) covering about one-fifth of U.S. workers.

To FDR and the New Deal, the minimum wage was an economic and moral imperative. New Dealers did not view it as an anti-poverty program, but primarily as a matter of economic fairness – fair pay for a fair day’s work and creating a fair playing field for employers who paid livable wages not being unfairly undercut by sweatshop employers exploiting workers with rock-bottom wages.

Finally, New Dealers contended, the minimum wage would save taxpayers money by reducing the reliance of minimum-wage workers on public welfare programs.

Since 1938, the federal minimum has been raised 22 times, embraced by four Republican Presidents (Eisenhower, Nixon, and the two Bushes) and six Democratic presidents (Roosevelt, Truman, Kennedy, Johnson, Carter, and Clinton). Typically it has won strong bipartisan support in Congress.

The boldest increase – roughly doubling the minimum in one jump, from 40 cents to 75 cents an hour (from $3.81 to $7.14 in today’s dollars) – was proposed by President Harry Truman after his surprise comeback re-election victory in 1948. 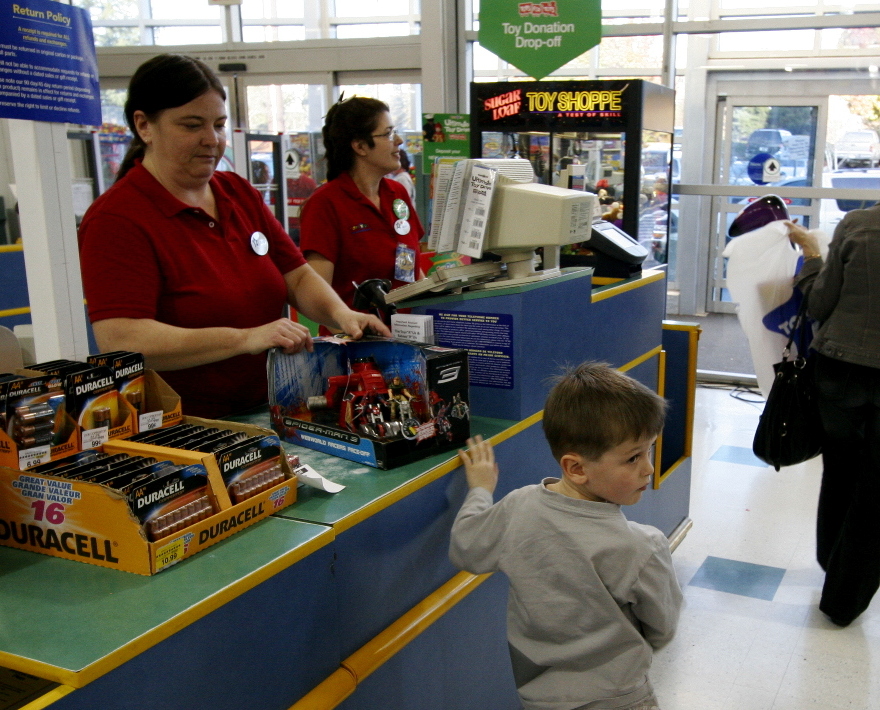 In 1974, Republican Richard Nixon approved a three-step increase from $2.00 to $2.30 ($9.41 in today’s dollars) asserting that the cost of living had risen so fast in the previous six years that raising the minimum “is now a matter of justice that can no longer be fairly delayed.”

In 2007, when the last increase was passed under President George W. Bush, nearly every Senate Republican and more than 60 percent of the House Republican Conference voted in favor.

Trying to Index Minimum Wage to Rising Cost of Living

There never has been a clear, fixed formula for setting the minimum wage, its fate largely determined by politics rather than by economic metrics. As things worked out, from 1950 to 1982 the minimum wage generally hovered around 45% of the average hourly wage of all workers. That ratio reached its peak in 1968 when the minimum was $1.60, or 54% of the average wage and equivalent to $10.69 in today’s dollars.

To try to stabilize the link between the minimum wage and average wages, President Carter’s Secretary of Labor, Ray Marshall, proposed in 1978 that Congress index the minimum wage to the federal cost of living index, adjusting it each year for inflation, like Social Security benefits.

President Carter did manage to win a three-step increase in the minimum wage from Congress, but Marshall’s indexing proposal was defeated in the House, by a vote of 222-193. Other attempts at indexing since then have also been defeated.

Since Reagan, Minimum Wage Has Fallen Behind

Bipartisan support for minimum wage increases eroded under President Reagan. In Hollywood, as head of the Screen Actors Guild in the late 1940s, Ronald Reagan had pushed for higher wage scales for Hollywood actors. But when he became President, Reagan reversed. He not only opposed raising the minimum wage but sought to eliminate any minimum for teenagers. He failed on that score, but for eight years he halted the steady long-term upward climb of the minimum wage.

Since Reagan’s Presidency, the minimum wage has fallen far behind the norms of the 1950s, 60s, and 70s. Adjusted for inflation, the current minimum of $7.25 an hour is almost one-third below the level in 1968, meaning that today’s minimum wage workers have nearly one-third less purchasing power than workers in the late 1960s.

What makes matters worse is widespread wage theft by employers against minimum wage workers – roughly 2.4 million employees shortchanged $8 billion a year in the ten largest states, according to the Economic Policy Institute, a progressive economic research think tank in Washington.  On average, that’s an average loss of $3,300 a year for full-time employees. “The magnitude of the crime being committed against American workers is huge,” the EPI study asserts.

Based on U.S. Census Bureau surveys and extensive research of state and federal labor data, EPI reported in May 2017 that over the past three years, almost 25% of minimum wage workers in Florida were cheated by their employers out 20% of their earned wages to which they were legally entitled or $1.1 billion; roughly 22% in Ohio and Illinois; and more than 19% in California and New York. Women workers are the most hard hit.

“Minimum-wage violations, by definition, affect the lowest-wage workers – those who can least afford to lose earnings,” write researchers David Cooper and Teresa Kroeger. “This form of wage theft causes many families to fall below the poverty line and it increases workers’ reliance on public assistance, costing taxpayers money.” Wage-theft may profit employers but the practice makes it harder for many working-class families to achieve economic self-sufficiency and achieve a middle-class standard of living. 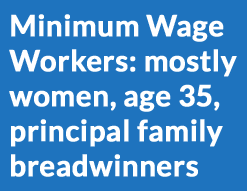 The impact of the stagnant federal minimum wage on working families has been compounded by dramatic changes in the face of minimum wage workers. Today, they are older, better educated, and more important as family breadwinners than in the early 1980s when many minimum-wage workers were teenagers, often filling part-time or temporary jobs.

Today’s typical minimum-wage worker is 35 years old and is the principal breadwinner in the household, meaning that a boost in the minimum wage would have a multiplier effect on the lives of people in millions of families.

Moreover, minimum wage-earners today are not mainly part-timers or high-school dropouts. More than half work full-time (54%). More than half are women (55%) and more than one-fourth have children (27%). Their education level is higher than three decades ago: Three-fourths have finished high school (78%) and one-third have some college education.

The Political Debate: Costs vs Benefits

So American demographics may have changed substantially but the political arguments in Congress today over whether to raise the federal minimum wage have changed little since the 1930s. The debate remains fundamentally a political clash over cost vs benefit tradeoffs.

In February 2014, the Congressional Budget Office, the supposedly neutral referee, issued its estimate that adopting President Obama’s proposal for a three-step hike to $10.10 an hour would “reduce total employment by about 500,000 workers” come 2016, but the CBO hedged by saying “the actual losses could be smaller or larger,” from virtually zero up to one million.

Significantly, the CBO did predict that the higher minimum would give a pay raise to 16.5 million workers, add $31 billion to their family budgets, and lift 900,000 people out of poverty. And it estimated that higher minimum wages would generate “a small decrease in budget deficits for several years” because at higher pay, minimum wage workers would rely less on federal welfare programs and pay more taxes. 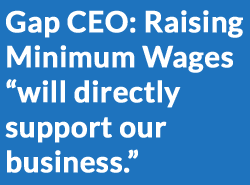 The CBO’s effort at factual analysis did not alter the politics of the issue. Then-Senate Minority Leader Mitch McConnell of Kentucky and other Congressional Republicans pointed to the possible loss of one million jobs as ample reason to oppose the President’s plan.

Jason Furman, Chairman of President’s Council of Economic Advisers, disputed the CBO estimate, saying it did not reflect “the consensus view” among economists. Harvard economist Lawrence Katz cited new studies showing that even if a higher minimum caused individual businesses to cut back, the overall impact on jobs was negligible.

Experience Shows a Plus for Higher Minimums

Experience around the country pointed to a more positive outcome – that higher minimum wages went hand in hand with job growth. For while Congress was stuck in gridlock, 38 states introduced bills to raise their own minimum wages in 2014. In April, the U.S. Department of Labor reported that the 13 states that had upped their state minimums on January 1, 2014, added jobs faster than the states which did not raise the minimum wage.

That logic apparently sways many businessmen. In a poll conducted for the American Sustainable Business Council and Business for a Fair Minimum Wage in 2013, 61 percent of small business owners favored stair-step increases in the federal minimum to $10.10 an hour and then indexing it to inflation.

Their rationale echoed Henry Ford back in 1914 – namely, that business relies for growth on consumer spending and consumer spending depends heavily on rising wages. In fact, on the day after CBO issued its minimum wage report, the Gap retail clothing chain announced that it was voluntarily raising its minimum hourly pay to $9 in 2014 and $10 in 2015 for 65,000 of its 90,000 employees nationwide.

CEO Glenn Murphy said higher minimum pay was a smart business: It would boost employee morale, deliver better service for customers, reduce employee turnover and increase corporate profits over the long run. “To us, this is not a political issue,” Murphy asserted. “Our decision to invest in front-line employees will directly support our business, and is one that we expect to deliver a return many times over.”