Twenty states from coast to coast, reacting against the Citizens United decision, have gone on record in favor of a U.S. constitutional amendment to restore the power of Congress and the states to put some limits on campaign spending. At the local level, too, there’s a crescendo in the call for reform. Roughly 800 local governments from Sarasota, FL to Midway City, KY, and Conway, Arkansas to Salt Lake City, Utah and San Luis Obispo, California have also demanded constitutional action to reinstitute controls on campaign spending.

State actions have come either through popular referendums, legislative resolutions, or collective letters from state legislators to Congress. Among cities, the Los Angeles referendum in May 2013  is fairly typical. Passed by a 77% majority vote, it instructed elected officials to press for an amendment, stating that “there should be limits on political campaign spending and that corporations should not have the constitutional rights of human beings.”

Check our state-by-state rundown below to find out where your state stands or whether actions have been taken by major cities near you. The states that have taken action include California, Colorado, Connecticut, Delaware, Hawaii, Illinois, Maine, Maryland, Massachusetts, Montana, Nevada. New Hampshire, New Jersey, New Mexico, New York, Oregon, Rhode Island, Vermont Washington, and West Virginia, plus the District of Columbia. There have been other movements to join that list in Arkansas, Florida, Iowa, and Minnesota.

The Push for Reform Came Fast

Grassroots reaction came swiftly against the Supreme Court’s ruling in January 2010 in Citizens United that authorized unlimited spending by corporations and unions from their general treasuries. 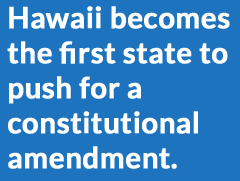 Just three months later, the state legislature in Hawaii passed a resolution calling on Congress to propose and send to the states a Constitutional Amendment restoring to Congress and the states the power to regulate corporate campaign donations.

In 2012, legislatures in Vermont, Massachusetts, New Jersey, and California, passed similar resolutions.   In 2013, legislative action for a constitutional amendment was taken by Illinois, Maine, New Mexico, Oregon, and West Virginia.

As the movement spread, some states took a different approach. In Delaware and Maryland, a majority of the state’s Senate and House of Delegates signed a letter to Congress calling for a Constitutional amendment. In Connecticut, a majority of the state’s senators and representatives signed a similar letter. In New York, majorities of lawmakers in both houses of the state legislature signed five different letters from different party caucuses, all calling for a constitutional amendment to reverse the impact of the Citizens United ruling and restore legislative power to regulate campaign finance.

Groundswell from the Grass Roots

But the most striking show of popular discontent and the most visible popular groundswell for campaign reform came in in the November 2012 elections in the states of Colorado and Montana. The votes in those two states demonstrated that at the grassroots, the drive to control the rising tide of Mega Money in elections draws support from across the political spectrum – from Republicans, independents, and Democrats

In Colorado, every single county in the state had a majority in favor of reform – those that are predominantly Republican as well as those dominated by Democrats or counties that are a mix of D’s, R’s, and independents. The reform measure was backed by more than 1,650,000 voters or roughly 73% of the total vote. the margin of victory was similar in Montana.

Congress Is Out of Step with Voters

Even so, Congress still resists what opinion polls show to be the demand of a large majority of voters for reform on campaign finance. In September 2014, a majority of U.S. Senators voted in favor of a constitutional amendment but their 54-42 majority fell short of the 60 votes needed to overcome the threat of an opposition filibuster. It was a partisan clash: All 42 “No” votes came from Republicans and all 54 “Yes” votes came from Democrats. 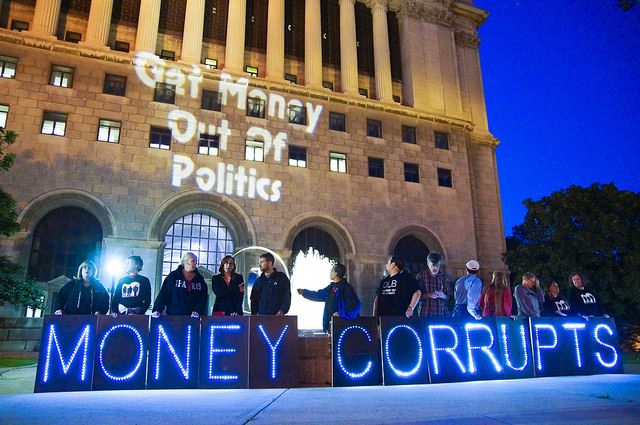 But solid Republican opposition to systemic reforms is splintering. During the 2016 presidential primary campaign, GOP presidential contenders. Sen. Lindsay Graham of South Carolina and former Florida Governor Jeb Bush came out in favor of a constitutional amendment. In various states, some Republican legislators support reforms to curb runaway campaign spending as does U.S. Rep. Walter Jones, a North Carolina Tea Party Republican. “If we want to change Washington and return power to the citizens of this nation, we have to change the way campaigns are financed,” Jones asserts. “The status quo is dominated by deep-pocketed special interests, and that’s simply unacceptable to the American people.”

New Hampshire is typical of states where a constitutional amendment on MoneyPolitics has generated a clash between elected lawmakers and grassroots opinion. New Hampshire still uses traditional town meetings and local petitions to let voters take a stand on issues. Since 2014, voters in 69 towns have passed local ballot initiatives calling for a constitutional amendment to reverse the Citizens United decision and to limit campaign spending.

In May 2014, heeding the town votes, a solid majority of the New Hampshire House of Representatives – 154 Democrats joined by 29 Republicans – voted in favor of a constitutional amendment resolution. But ten days later, the Republican majority in the state senate voted 12-11 to block the proposal.

In 2015, campaign reform was back on the legislature’s agenda, with Republicans controlling both houses. The Senate gave unanimous bipartisan approval to a bill “recognizing the need” for a U.S. constitutional amendment and tasking a study committee to analyze the options. But the house did a zig-zag dance. A strong resolution endorsing a constitutional amendment narrowly passed, but minutes later, with the electronic voting machines malfunctioning, that vote was reversed. Vote switching by 13 house Republicans killed the bill, setting up constitutional reform as a campaign issue in 2016.

Even with all the popular backing already generated, any effort to amend the U.S. Constitution entails a sustained popular campaign for passage. As polls indicate, so many Americans are angry about skyrocketing campaign spending by corporations and the super-rich that the issue keeps gaining momentum around the country. 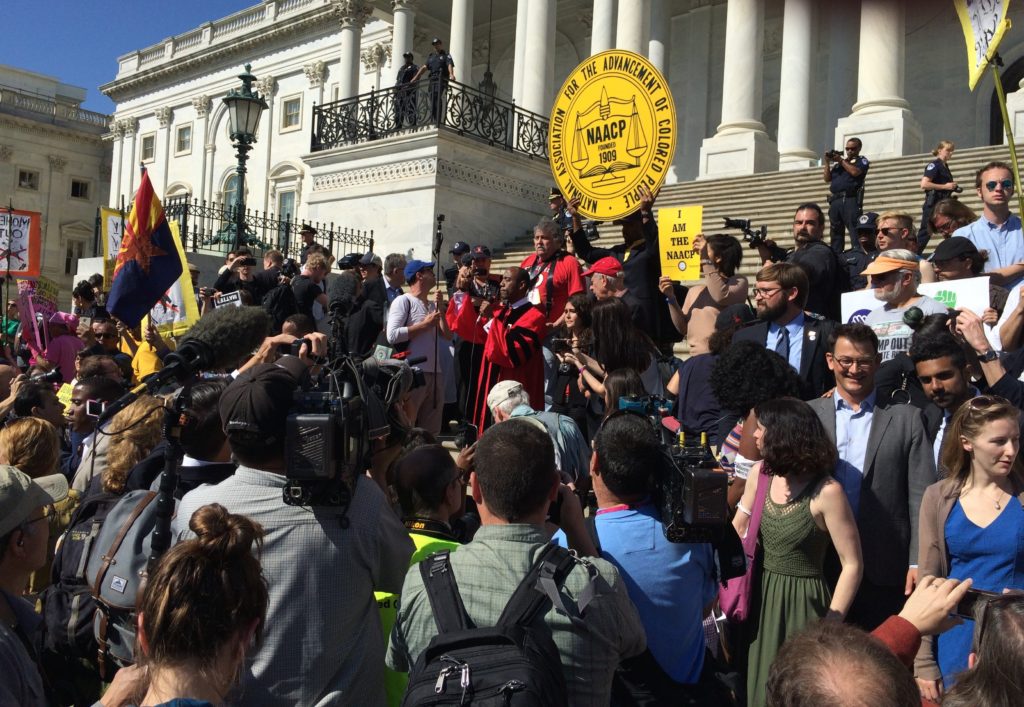 In April 2016, several thousand Americans took a week of protest marches to the U.S. Capitol steps to underscore public anger at Congress for ignoring popular demands for constitutional reforms to restore controls on campaign spending. In an echo of the civil rights protests of the 1960s, demonstrators who came from as far away as Guam and Presque Isle, Maine and some of whom marched by foot 140 miles from Philadelphia, engaged in civil disobedience, deliberately inviting arrest to try to force Congress to take notice.

In all, 1,300 people were arrested, including such leaders as Kai Newkirk of 99Rise, Robert Weissman of Public Citizen, Larry Cohen, former president of the Communications Workers of America, Cornell Brooks of the NAACP, Rev. William Barber, leader of North Carolina’s Moral Monday movement,  and Ben Cohen and Jerry Greenfield of Ben & Jerry’s ice cream. Several thousands more marchers and activists cheered those who dared arrest.

“I believe that courage is contagious,” said demonstrator Frances Moore Lappe of Boston.”If other people see us taking action, then I think they’ll have the courage to join in.” Newkirk said it was crucial to move beyond emails and tweeting to direct action to show politicians how strongly Americans feel about the money corrupting our democracy. Weissman asserted that the protest week organized by the Democracy Spring and Democracy Awakening signaled that the reform movement is stepping up its militancy.

Three months later, in July, a bipartisan group of six members and candidates for Congress made a direct challenge to the funding of SuperPACs in a formal complaint to the Federal Election Commission. With a high profile bipartisan legal team drawn from Harvard and the Bush Administration, they argued that the D.C. Circuit Court of Appeals, in the SpeechNow.org case,  had stretched the Supreme Court’s Citizens United decision in a way that left a ceiling on contributions to candidates but no limits on funding for SuperPACs.

“The situation … is one that Congress never enacted and people would never support,” said Laurence Tribe, professor of constitutional law at Harvard. “The law permits a very severe limit on the amount an individual can give to someone’s campaign, but at the same time that could be evaded by giving millions to SuperPACs….The Supreme Court never approved anything like that.”

But with the FEC paralyzed for years by a three-to-three Republican-Democratic split, analysts were dubious about the prospects for the complaint. In a comment to The Washington Post, conservative election law attorney James Bopp Jr. dismissed it as “a case going nowhere.”

Check Your State in Our 50-state Rundown:

May 19, 2017 – Defying the Supreme Court’s “Citizens United” Decision, the Clean Missouri reform coalition launches petition drive to put on 2018 election ballot a measure to impose lower limits on contributions to legislature candidates. The Clean Missouri coalition, with financial backing from the Missouri teachers union, is also pushing for a popular vote on a constitutional amendment to achieve a non-partisan system for mapping state legislative districts by using a non-partisan expert to draw the maps and mandating the use of specific statistical data.