With Congress and the White House gridlocked on the bread-and-butter issue of a fair minimum wage and unable to enact new legislation since 2007, states and cities covering roughly 60 percent of the American workforce, or close to 100 million workers.  have stepped into the political vacuum and taken the initiative to raise the minimum wage in their job markets.

By popular vote or previous legislative action, 25 states are raising their minimum wage in 2021 – 20 of them on January 1; five more, later in the year.  Some like California, Florida, Illinois, Maryland, Massachusetts, New Jersey, and New York are implementing annual increases on their way to a $15 minimum wage in the mid-2020s. Others have more modest targets. But even red states like Alaska, Arizona, Arkansas, Missouri, Ohio, and South Dakota are moving well above the federal minimum,  still stuck at $7.25 an hour.

In July 2019. House Democrats tried to break the gridlock in Washington by passing a bill to raise the federal minimum wage from $7.25 to $15 per hour by 2025, with a sequence of annual pay increases. Three Republicans joined 228 Democrats to vote for an increase in the national wage floor, But overwhelming GOP opposition in the House foreshadowed that the bill would be doomed in the Republican-controlled Senate, which refused to take any action.

But already, starting in 2014, the states began moving ahead of the federal government. By now, voters or legislatures in 29 states from Maine to Hawaii and a dozen major cities and localities have boosted their minimum wage requirements well above the federal minimum of $7.25 an hour.

The eight most ambitious states — California, Connecticut, Florida, Illinois, Maryland, Massachusetts, New Jersey, and New York plus Washington DC – have adopted $15 an hour as their goal and passed laws or ballot initiatives implementing yearly increases to achieve that goal by 2025 or 2026.

Even though the federal minimum wage remains frozen and ignored both by the Trump White House and the Republican Congress, action by the states has added $5 billion to the paychecks of 4.5 million workers.

At present, fourteen states have adopted the federal minimum as their own, and six states have minimum wage levels below the federal level to cover workers who are exempted from federal coverage, such as those in small businesses. Two states, Georgia and Wyoming, have state minimums of $5.15 an hour for workers not covered by the federal minimum. Five other states, Louisiana, Mississippi, New Hampshire, South Carolina, and Tennessee have no minimum wage law at all.

Flash Strikes and the “Fight for $15”

Fast-food restaurants and chains like McDonald’s became the target battleground of what became known as the “Fight for $15,” with employees staging one-day “flash strikes” in a nationwide campaign to pressure liberal-leaning cities and states to adopt $15 as a wage floor.

For five years or more, McDonald’s fought bitterly against the higher legal minimum wages. But in March 2019, McDonald’s switched course and declared, “We believe increases should be phased in.” What’s more, in a letter to the National Restaurant Association, Vice President Genna Grant also announced that McDonald’s, with 800,000 employees in the U.S., was quitting the association’s political lobbying campaign “to defeat wage increases” from being enacted in Washington and in state capitals. 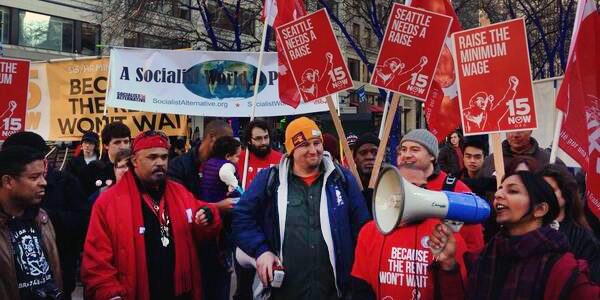 The first breakthrough in the “Fight for $15” came in an unlikely spot – the small city of SeaTac, surrounding the airport area of Seattle and Tacoma, Washington. When employers rejected union demands, labor, religious, and community groups scored a victory for the $15 minimum and other protections in SeaTac through a popular referendum in November 2013. Seattle became the first big city to adopt the $15 minimum in 2014.

Within two years, the states of California and New York also adopted $15 an hour as their target, to be reached step-by-step over several years, as in Seattle. With more than a score of states raising their minimum ages gently, several large cities pushed ahead with bolder increases  – cities like Albuquerque, Chicago, Los Angeles, Providence, Kansas City, San Francisco, San Diego, and Santa Fe.

In a few cities, such as Philadelphia, mayors and city councils have gotten around the state pre-emption laws by targeting higher minimum wage measures more narrowly to cover just city employees and city contractors. This has also happened in less urban areas such as Buncombe County and Durham County in North Carolina.

Under pressure from labor protests and a tightening labor market, major corporations are leapfrogging far ahead of Congress. Target just became the first national retailer to commit to a $15 an hour minimum wage (in 2020), starting with a boost to $11 in 2017 for 100,000 seasonal workers along with its 338,000 regular employees. Big box retailer Coscto bumped up its minimum to $13.

The upward wage push in retailing started in 2014 and 2015 when Target, Gap, Wal-Mart, Ikea, and Marshall’s pushed their wage floors to $9 or $10 an hour, and Costco went to $11.50. Some financial companies went further. Aetna boosted entry-level pay from $12 to $16 in early 2015 and JP Morgan Chase went to $16.50 an hour. Explaining Aetna’s 33% pay raise to its lowest-paid customer-service agents and claims adjusters, CEO Mark Bertolini asserted: “For the good of the social order, these are the kinds of investments we should be willing to make.”

On that theme, Seattle Billionaire Nick Hanauer, in an online message to “My Fellow Plutocrats,” argues that America’s sharp political divisions will not ease until more CEOs raise rank-and-file pay. “Our country will not get better until our fellow citizens feel better, and they will not feel better until they actually do better,” Hanauer writes. “This is the stark, simple fact at the heart of our failing political system. Nothing is going to get better until we enact laws and standards that persuade or oblige every business to pay every worker a fair, dignified, and livable wage.”

Typically, the business cry against raising minimum wages is that it will cost jobs, leading to layoffs and shorter hours, hurting job growth. In response, economists have done multiple studies to determine whether job loss is inevitable or whether jobs and wages can rise together. several recent academic and Federal Reserve studies point to growing evidence that in recent years job growth has moved ahead largely unabated in states that have aggressively raised their minimum wages, such as California, Colorado, Maine, Massachusetts, New York, Oregon, and Washington.

In Seattle, advocates of moving to a $15 minimum wage over several years argued that Seattle businesses would benefit from more workers having more purchasing power and that rising minimum wages would not hurt continued job growth. Their contention was borne out by a 2017 study that found none of the job loss that some business owners had forecast and that predicted job cutbacks did not materialize. An earlier economic study found that after Illinois raised its minimum wage in 2005 above levels in other Midwestern states, Illinois improved its job growth faster than neighboring states that did not raise their wage floors.

After major cities in California boosted local wage minimums in 2014 and 2015, some local restaurants and food chains forecast job cutbacks. But economists at the University of California in Berkeley reported that their job surveys in subsequent months  “show that wages in food services did increase—indicating the policy achieved its goal… Employment in food service, however, was not affected, even among the limited-service restaurants.”

In 2019, the Federal Reserve Bank of New York reported that job growth has surged in New York state in counties along its southern border with Pennsylvania, even though Pennsylvania stuck with the federal minimum of $7.25 an hour while New York adopted year-by-year wage floor increases moving toward a $15 hourly minimum wage The New York Fed found that in certain sectors, job growth moved faster than in lower-wage Pennsylvania.

“As the minimum wage was raised to levels above $10 per hour, leisure and hospitality employment in New York counties, if anything, increased relative to businesses over the Pennsylvania state line,” the Fed stated, emphasizing that fears of slower job growth “as a result of the rising minimum wage seem not to have been borne out.”

The New York Times, talking with business owners who were dealing with the higher wage minimum,  found that New York employers like Mercer’s, a family-friendly diner near the town of Ripley, were able to absorb higher wage costs and avoid layoffs and shorter hours by bringing in new equipment, introducing other efficiencies and modestly raising prices. Owner Sheila Bennett said customers barely noticed the higher prices and the business moved ahead nicely.

In his final year, President Obama – blocked by Republicans in Congress from raising the federal minimum wage to $10.10 an hour, sign an executive order raising the minimum for companies with federal contracts, boosting the pay of roughly 560,000 employees, according to administration economists.

In another executive action, the Obama Administration qualified 13.5 million more Americans for time-and-half overtime pay by expanding the salary levels covered by overtime rules. In May 2016, the Labor Department ordered that employees working more than 40 hours a week were entitled to overtime pay if their annual salary is under $47,476. The previous cutoff for overtime pay, set in 2004, was $23,650.

But when Donald Trump moved into the White House, his Labor Department put a freeze on implementing the Obama rule heeding objections from corporate CEOs and other business leaders. In September 2019, the Trump Administration finally set the new cutoff for time-and-a-half overtime pay at $35,500,  a move that benefited roughly 1.3 million workers but left out millions more that would have been covered by the Obama rule. 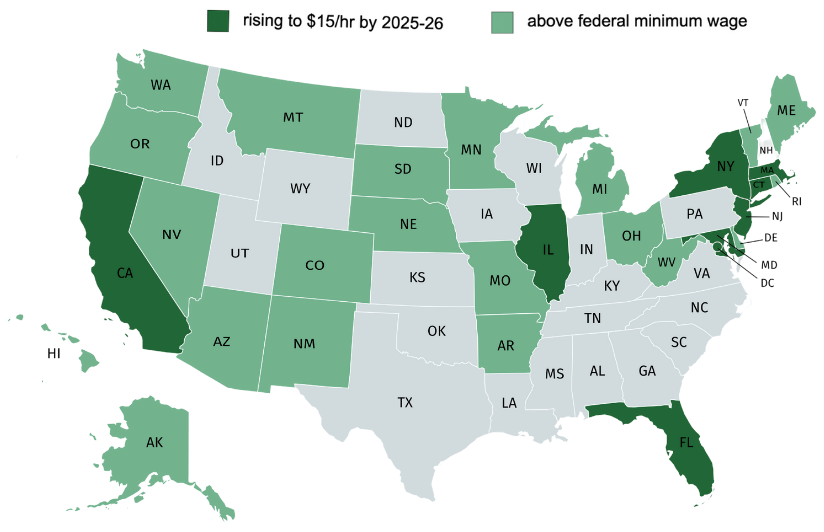 Is your state’s minimum wage enough for an average family to live on? Find out how wages in your state and hometown stack up against the cost of living in your area by visiting the Living Wage Calculator from MIT.[/padding_box]

For information on your home state or to make comparisons, please scroll down through our state-by-state rundown below and if you want more detail on state laws, visit the website of the National Conference of State Legislatures and learn even more.