After Citizens United:
Amend the Constitution
Get More Resources On This Topic    ▾

The depth of public anger at the Supreme Court’s Citizens United decision in 2010 and the hunger among voters of all political stripes for action to block billionaire campaign donors were what sparked action in Colorado.

Public anger convinced Rocky Mountain reformers that they had a shot at passing a statewide referendum calling for amending the U.S. Constitution to control MoneyPolitics.

The first test vote came in Boulder, home of Colorado University, in 2011 as new money was flooding into campaigns across the country after the Supreme Court killed spending limits for corporations.

Boulder’s city council decided to give ordinary voters a say: You decide whether to reject Court rulings that money equals speech and corporations are like people, and whether the U.S. Constitution should be amended to help restore campaign spending limits.

A resounding 73% majority said “Yes,” fix American politics, amend the Constitution. Not only did the size of that majority catch the eye of Common Cause and other reform-minded groups. So did the breadth of the reform coalition.

The groups that got behind the push for reform ranged from the Boulder Move to Amend, Boulder Veterans for Peace, Rocky Mountain Peace and Justice Center, conservation groups like the Sierra Club and PLAN Boulder County, Boulder Area Labor Council, and Boulder Democrats to a group of Colorado University students with the nickname of SHELF – Student Humans Ending Legal Fiction – and they meant the fiction of “corporate personhood.”

Interpreting the Boulder vote as a litmus, Colorado Common Cause joined forces with Colorado PIRG, the Colorado Public Interest Research Group, or coPIRG, and other organizations to prepare for a statewide referendum. It seemed a daunting challenge in a politically purple state of more than five million people.

Reform Has Roots in Colorado

But in 2012, history was on their side. Over the previous decade, Colorado voters had come out strongly in favor of campaign finance reforms. When the state legislators blocked or torpedoed reform measures, strong popular majorities swept in reforms by referendum.

In 2002, Colorado voters had adopted a reform that imposed spending limits and required disclosure of campaign funding and spending. In 2006, the Colorado electorate voted in favor of ethical standards for public officeholders. By framing those reforms as amendments to the Colorado state constitution, reformers made sure that elected politicians could not undo what citizens have voted for.

“We had a long history of using popular referendums for campaign finance reform,” recalled Elena Nunez, Colorado director of Common Cause, the nonpartisan citizens reform group. At 24, Nunez had come to Colorado in 2002 to work on campaign reform. “We knew that voters in Colorado had a good track record. They were supportive of campaign reform efforts.” 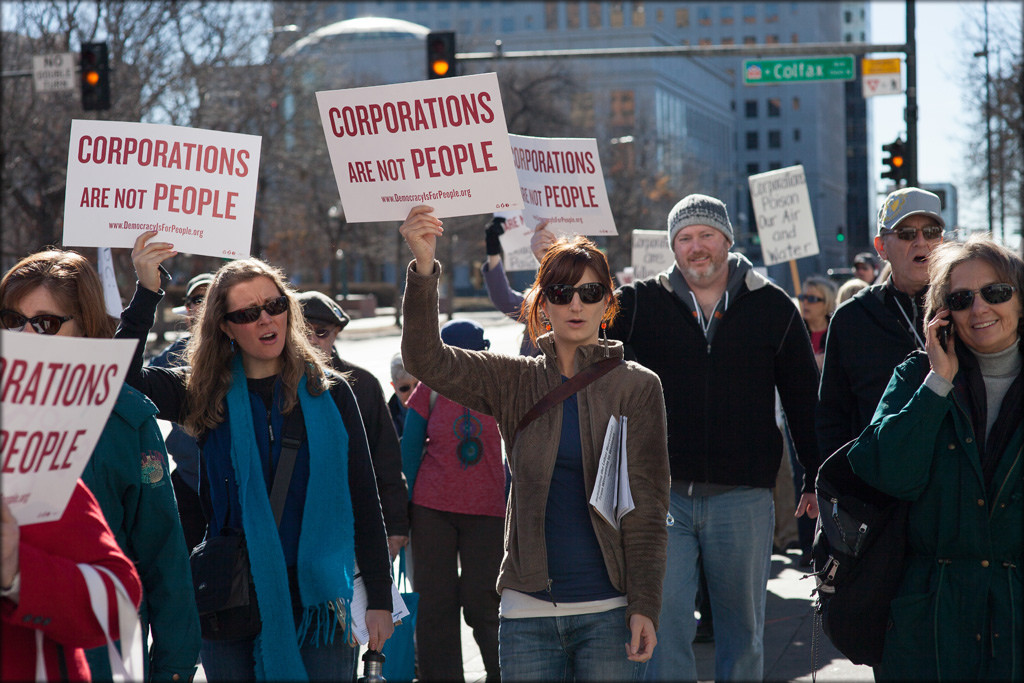 Common Cause, which anchored the 2012 coalition, wanted to be sure that referendum was worded properly to win strong support. IT took a statewide poll to measure public responses to various wordings – whether to challenge the concept of corporate personhood or just focus on a U.S. Constitutional amendment for campaign spending limits or try a combination of the two.

“Our polling showed strong support across the board” for all three versions, Nunez said. Still, the campaign chose the simplest version with the broadest appeal:

A proposal to instruct Colorado’s Congressional delegation “to propose and support” a U.S. constitutional amendment that “allows Congress and the states to limit campaign contributions and spending, to ensure that all citizens, regardless of wealth, can express their views to one another and their government on a level playing field.” It also instructed the Colorado legislature to ratify such an amendment.

In June 2012, the campaign’s first challenge was to meet a tight deadline for collecting 86,105 signatures on petition to get the constitutional referendum on the Colorado ballot in November. The deadline was August 6. CoPIRG and Colorado Fair Share, using paid campaign workers, spearheaded the signature drive. Volunteers from other groups pitched in. By the deadline, they had 177,000 signatures. That put their proposal on the ballot as Colorado Constitutional Amendment 65.

Because 2012 was a presidential election year and Colorado, as a swing state, was hotly contested by President Obama and Republican Mitt Romney, the state was inundated by TV ad barrages from both parties and candidates. And so the political reform coalition decided on a fairly low-key, below-the-radar campaign. 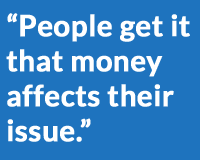 esides, they knew that the voter turnout would be heavy not only because of the presidential race but also because Colorado would be voting on a proposal to legalize the sale of marijuana, which meant that many younger and progressive voters were sure to turn up on Election Day.

They also knew they had a good grass roots issue. “Our theory was that this was not an issue that would drive people to the polls,” recalled Elena Nunez “But if they were aware of it, there was a good chance they would be supportive.”

What Did It? The Support Network

The Colorado media was so focused on the presidency, Congress and pot that campaign reform and Amendment 65 got very little coverage. The Denver Post discounted the importance of the reform drive on grounds, saying its call for a U.S. Constitutional amendment was unenforceable.

But with polls in their favor, only modest funds and no organized opposition, the reform coalition focused on public education. Volunteers ran statewide phone banks, organized by the Communications Workers Union. But mostly, reformers reached out to voters through a network that included the Colorado Center for Law and Policy, Denver Area Labor Federation, Interfaith Alliance of Colorado, Planned Parenthood of the Rockies Votes, Rocky Mountain Peace and Justice Center, and more.

Their message was blunt: If your policy concerns affect youth, senior, environmental, health, or social justice issues, they are going to be stuck in gridlock or swamped by wealthy special interest lobbies unless the power of MoneyPolitics is broken and the nation’s broken political system gets fixed.

“People get it that money affects their issue,” Nunez reported.

Landslide Win – A Model for Other States

The message resonated big-time with voters. On November 6, 2012, more than 2.4 million Coloradans voted on the referendum calling for a U.S. constitutional amendment to reverse the Supreme Court’s Citizens United decision. In all, 1,762,515 Coloradans voted for reform – a whopping 74% majority! The proposal carried every single county in Colorado, red counties, blue counties, purple counties. 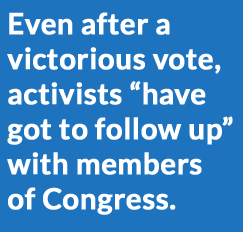 This was the kind of breakthrough landslide that campaign reformers had been looking for nationwide, to start to melt the Congressional stand-pat obstructionism to reform.

In Colorado’s Congressional delegation, the sweeping referendum victory moved the state’s two sitting U.S. Senators, Democrats Michael Bennett and Mark Udall, to vote in favor of bringing a Constitutional amendment on campaign reform to the Senate floor. Rep. Ed Perlmutter, a Democrat representing Denver’s suburbs, co-sponsored a similar measure in the House. But Republican Congressman Doug Lamborn from central Colorado is strongly opposed to constitutional reform. Even after the 74% “yes” vote, five other Colorado representatives hedged where they stand.

So while the Colorado victory was an important springboard for further action and a model for other states, the lesson from Colorado is that in order to move a reluctant, gridlocked Congress, grass roots civic action has to be persistent and relentless. It’s not a one-shot campaign. It has to spread from state to state.

Even after a victorious vote, activists “have got to follow up” with members of Congress to make them toe the line, asserts Nunez of Common Cause. “We’ll be working to see if we can move them in the next couple of years.”