The hunt for competitive traction is what stirred Republican Governor Bill Haslam of Tennessee to adopt tuition-free community college as the cornerstone of his “Drive for 55” – his plan to upgrade the state’s workforce by pushing up the number of Tennesseans with a college degree or completion certificate from 32% today to 55% by 2025. 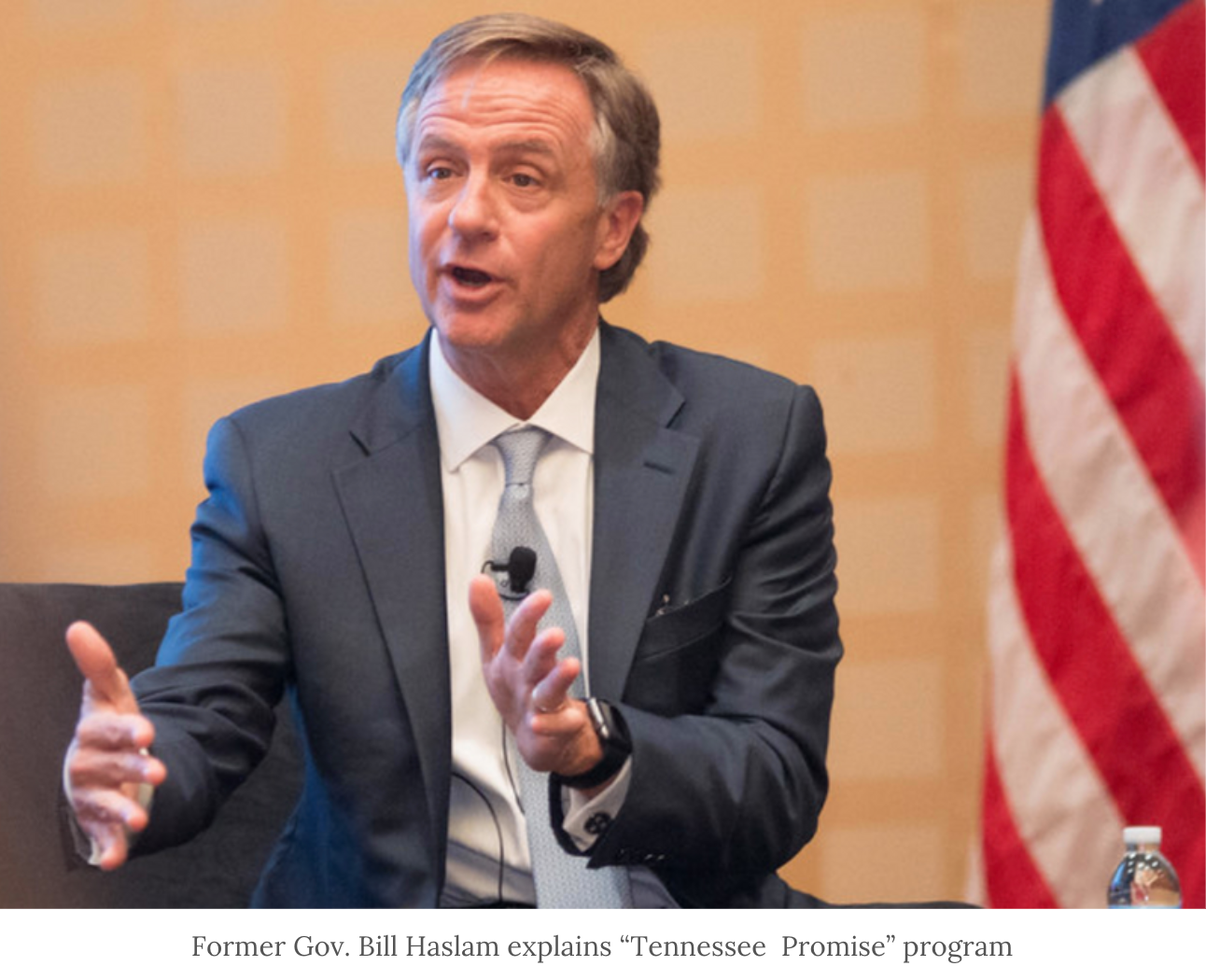 Governor Haslam, a former corporate CEO, was emphatic about the need to boost performance by widening educational access. “This is a must if Tennessee is going to compete for the jobs that will exist ten years from now,” he declared, signing his program into law in May 2014. “We are not coming anywhere close to having the trained level of workforce that we need here, either in quantity or quality of workers.”

Eight months later, President Obama jumped on the community college bandwagon in his 2015 State of the Union Address. He proposed a nationwide plan for two years of tuition-free community college, with the federal government footing 75% of the bill provided that states put up the other 25%. Several states and cities like Chicago have already been moving in that direction.

For the Class of 2015 – The Tennessee Promise

In Tennessee, what caught national attention was that a governor and former business executive was publicly reversing the three-decade trend of states’ slashing funds for higher education.

Not that Republican Bill Haslam was proposing new taxes to finance education for the next generation. What Haslam did was to jaw-bone a somewhat reluctant Republican-controlled state legislature into creating a $300 million endowment for the community college program by reallocating state lottery funds previously earmarked for scholarships at four-year universities and by appropriating another $47 million in new funds. Tennessee also structured its program as a “last dollar” scholarship, meaning that students can only draw upon Tennessee Promise funds after tapping all other available financial aid, including federal Pell grants and federal loans.

To underscore the state’s long-term commitment to widening access and lowering costs of of higher education, Governor Haslam christened his initiative The Tennessee Promise. To teenagers and their parents, he pledged: “It’s a guarantee because it’s funded with an endowment.”

Starting with the high school graduates in 2015, aides say, the program will serve 12,000 new students, sparing them the annual $3,800 tuition at Tennessee’s 13 community and technical colleges. To qualify, students must maintain a 2.0 grade-point average, make steady academic progress, and do eight hours of community service. Plus, they’ll have to fund their own room, board, books, transportation and other educational costs estimated at $12,000 a year.

Some Congressional Republicans like Senator Lamar Alexander, former governor of Tennessee and former Education Secretary, have endorsed free community college tuition in principle. But they urge states to move ahead on their own, rather than depending on the national program proposed by the President. “Let other states emulate Tennesee’s really good idea,” Alexander wrote in an oped for The Knoxville News.

The Tennessee strategy quickly found adherents among other states, most quickly in other states as politically different as California, Oregon and Texas  Among cities with local colleges, Chicago led the way with a plan put forward by former Mayor Rahm Emanuel to waive the cost of tuition, books and fees at the city’s seven community colleges for students who graduate from high school with at least a 3.0 average. 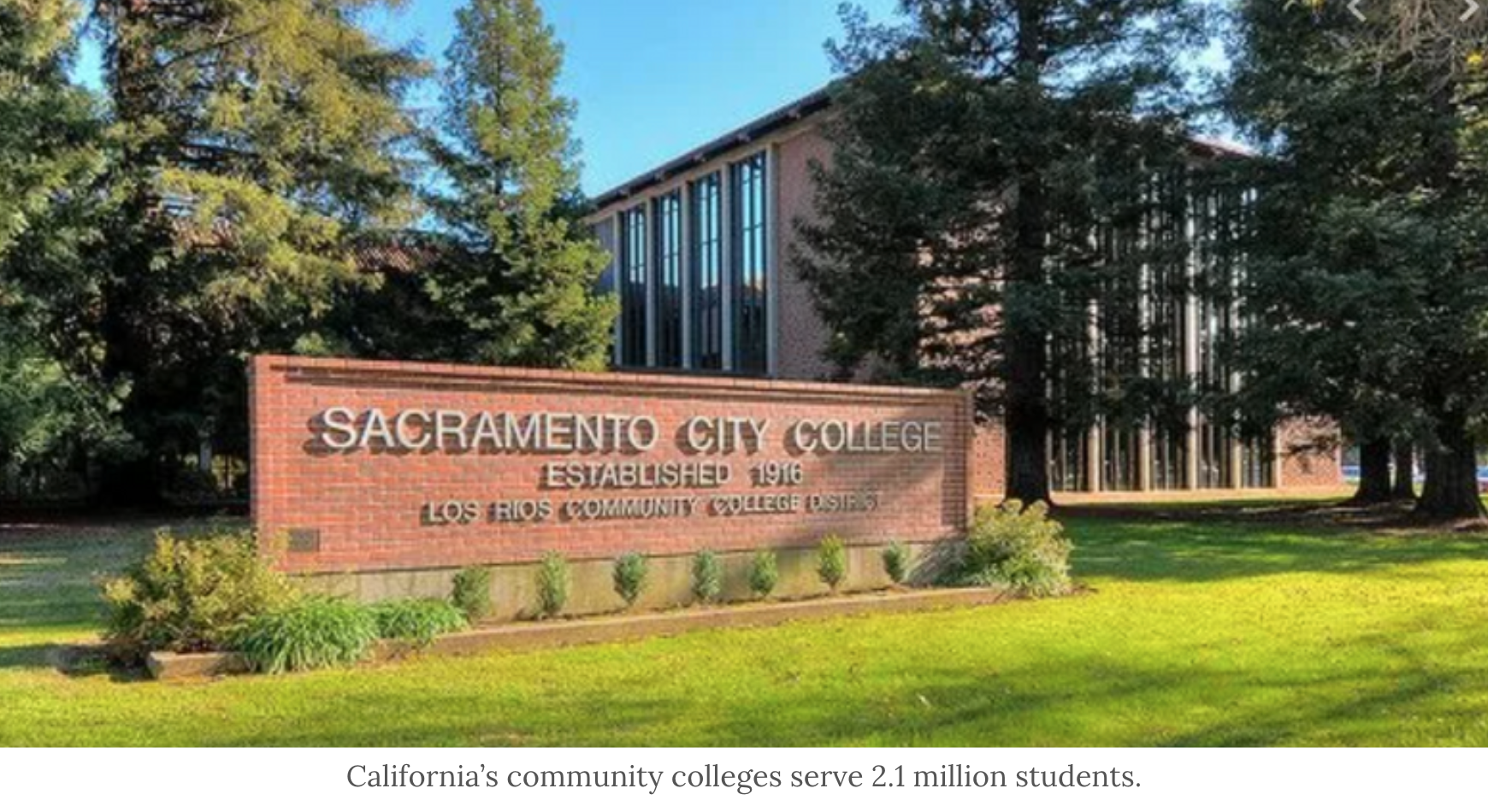 California, which has the nation’s largest community college system with more than 2.1 million students, has gone further than other states. It has essentially put the Obama plan into practice. For starters, California community colleges charge much lower tuition than most other states ($1,429 compared to Tennessee’s $3,800), and then California waives full tuition for nearly two-thirds of all 17- to 19-year-olds enrolled full time at one of the state’s 112 community colleges.

Like the Obama plan, California’s community college program also targets maximum aid to the most needy students. In California community colleges, all low-income students who receive a federal Pell Grant are also granted a tuition waiver, meaning that with tuition already free, they can apply their federal funds to pay other educational expenses.

As two California educational specialists, Professor Michael Kurlaender of UC Davis and Jacob Jackson of California’s Public Policy Institute, have observed: “The White House’s ambitious proposal isn’t a game-changer for California, but it might end up making the rest of the nation look a lot more like California.”

And, other states might notice, the California strategy would start to provide some real relief from college debt for students at the lower end of the income scale.

In Tennessee, Which Students Will Benefit Most?

For the state of Tennessee, the overall price-tag will be a modest $34 million a year because Governor Haslam structured The Tennessee Promise as a “last-dollar” scholarship. This means that the state pays the last dollar – that no state funds will be expended until students have exhausted every other possible source of tuition funds, including federal Pell Grants. This keeps state costs at a minimum.

Critics such as Bryce McKibben of the Association of Community College Trustees contend that the “last dollar” formula will exclude 35% of Tennessee’s community college students – the most needy students who come from low-income families.

Those students, McKibben calculates, will not get a penny from The Tennessee Promise because their low family incomes qualify them for federal Pell Grants, worth up to $5,730 a year, more than enough to cover their tuition and fees in Tennessee. And they cannot used funds from The Tennessee Promise to pay for such other educational costs such as housing and living expenses. It applies only to tuition.

In his federal program, President Obama has taken a different approach to make sure his College Promise program would include the neediest students as well as students from middle class and affluent families.

The Obama plan is a “first-dollar” program. It pays tuition costs up-front for all students who meet the program’s standards. This means that students from low-income families can use their Pell Grants to defray room, board and other costs, thus lowering their debt levels on graduation.

The target group is large. In all, about 7.7 million students now attend community college for credit; roughly 3.1 million go full time. Even prior to Obama’s new initiative, the federal government has provided about $9.1 billion annually to community college budgets, or about one-sixth of their revenues. Students pay about $16.7 billion a year in tuition.