Reverend Jan Bolerjack realized something was terribly wrong when workers from the Seattle-Tacoma Airport – SeaTac, to locals – began showing up in their work uniforms at the food bank for the poor run by her church, Riverton Park Methodist Church in south Seattle.

“It was the Menzies jackets in our food line that clued me in,” she said. “Menzies is the sub-contractor that Alaska Airlines uses for baggage handlers. I’d see men in Menzies jackets standing in line an hour or more. Waiting to get a food basket to feed their family. Day after day.”

It was a shock and a revelation. “I didn’t expect to see employed people in my food pantry line,” the pastor said. “It’s basically for the homeless, the unemployed, the poor. And suddenly I realized, ‘We’ve got an economic catastrophe at SeaTac. We’ve got so many low-wage jobs down there that working people can’t afford the cost of living. They can’t feed their families.’”

Poverty Wages – the Norm at Airports 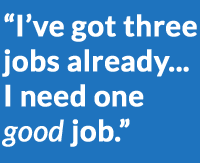 Nearly a decade ago, the airlines laid off unionized workers who used to make a solid middle class living in airport support jobs and replaced them at rock-bottom pay by outsourcing jobs to draconian subcontractors. Long-timers were cut back to part-time. Many had to take two and three jobs. Working conditions became so harsh that stage agencies cited contractors for safety violations and worker abuses.

Back in 1989, Alex Hoopes, a veteran baggage ramper, signed on with Alaska Airlines at $8.72 an hour plus good benefits. Under a union contract, Hoopes worked up to $21.00 an hour in 2005 ($38,000 a year, plus overtime). But suddenly, Hoopes and 492 other Alaska baggage handlers were laid off. Hoopes knocked around from job to job and then wound up back at SeaTac, doing the same work for $9.50 an hour in 2013 with next to no benefits. And he was among the fortunate.

So tight was the financial squeeze on thousands of workers, many of them immigrants from Somalia, Ethiopia, Bosnia, Ukraine and Samoa, that when unions knocked on doors in south Seattle in 2011, asking what workers wanted most, they kept hearing: “I don’t need a job. I’ve got three jobs already – three part-time jobs. Get me one good job – good job and good pay.”

That was the cue for organizers – not just at SeaTac airport, but in the incorporated town of SeaTac, a scrambled sprawl of 27,000 people stuffed into low-slung, flat-roofed developments and cracker box houses tucked behind jammed, beeping highways and working at the airport or in the surrounding jumble of hotels, motels, gas stations, parking lots, and miscellaneous eateries. 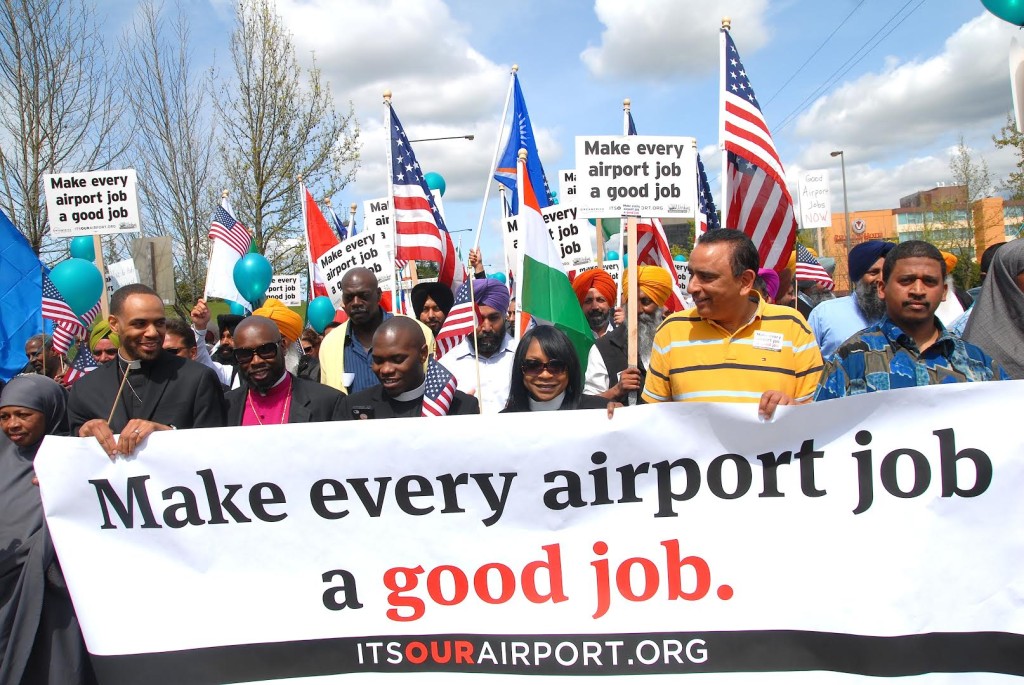 the mantra of the stunningly diverse coalition that ultimately made SeaTac the first municipality in the nation to vote in a $15 minimum wage in November 2013, against the entrenched resistance of rich, powerful airlines, the Port of Seattle Authority, which oversees SeaTac airport, and other business interests.

The SeaTac success story carries lessons in building community power for other cites and states confronting tough social and economic issues. The SeaTac coalition was remarkable – an alliance of strikingly disparate groups, cultures and nationalities. It succeeded by morphing from a traditional labor dispute into a grass roots movement that incubated a community-wide alliance.

Labor unions were the first to target poverty wages at SeaTac. But labor alone proved incapable of altering the status quo. When unions tried to organize the airport service workers, they lacked the legal underpinnings and the political muscle to change the power equation at SeaTac.

They did achieve one important breakthrough. In a dramatic shift from the past, four unions – the Service Employees International Union (SEIU), Teamsters Union, United Food and Commercial Workers Union (UFCW), and UNITE HERE, that represents hotel and restaurant workers – swallowed their age-old rivalries and turf wars to forge a united front called Working Washington. They pooled their resources, ultimately spending close to $2 million on the SeaTac campaign.

Labor Connecting with Churches and Mosques

But effective grass roots power emerged only as the minimum wage movement widened to recruit leaders and organizers from local churches and mosques and from the Somali, Ethiopian and other immigrant communities.

Puget Sound SAGE, a community organizing group for the Seattle area, provided a bridge to partnerships with the Church Council of Greater Seattle; with One America (an immigrant rights group); with the Low Income Housing Institute of Washington; and with worker-friendly environmental groups and community development organizations.

Moreover, Puget Sound SAGE did the vital research that enabled the worker movements to go toe to toe with business groups on the economic facts at SeaTac, educating the media and the public and helping to frame the debate over a $15 minimum wage. 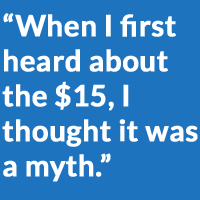 In one hard-hitting study, “First Class Airport, Poverty-Class Jobs,” Puget Sound Sage undercut business claims that raising wages at SeaTac would hurt the competitiveness of airlines at SeaTac. It documented that SeaTac had the lowest minimum wage among West Coast airports, and that employees doing the same work in Los Angeles, San Francisco, San Jose and Oakland made from $3.67 to 6.15 more per hour.

But the SeaTac campaign got off to a rocky start. Union organizing efforts among airport service workers in 2010-2011 ran into a stonewall from airline sub-contractors. Many East African immigrant workers were afraid to confront their bosses. Some were wary of unions and skeptical of talk about a $15 minimum wage.

“When I first heard about the $15, I thought it was a myth,” said Omar Mumin, a former aircraft fueler fired for refusing to shave his beard, now college-trained as a linguistic interpreter. ”The East African community didn’t believe it could win. Some people didn’t believe the union is reliable. People think they are just out for more members and collecting dues.”

But a dramatic episode at the Hertz rental agency changed attitudes. For a decade or more, car rental agencies at SeaTac, including Hertz, agreed to let scores of Muslim employees pray five times a day, as required by Islam, without docking their work-time. Then on Sept. 30, 2011, Hertz posted a notice requiring Muslims to clock out to pray. When they refused, Hertz suspended 32 Muslim workers in one weekend.

Teamster Local 117, representing Hertz employees, argued that the union contract permitted “mini-breaks” for a smoke, a coffee or prayer, without loss of work time. But management was adamant. It reinstated a handful of workers who agreed to clock out, but fired 25 others, who filed a lawsuit against Hertz.

What happened next became a turning point. The Teamsters Union organized a “Pray-In” at the Hertz airport office, rallying about 100 aggrieved workers, friends and families for a half an hour of prayers and chants. That show of solidarity gave unions new credibility in the immigrant communities. 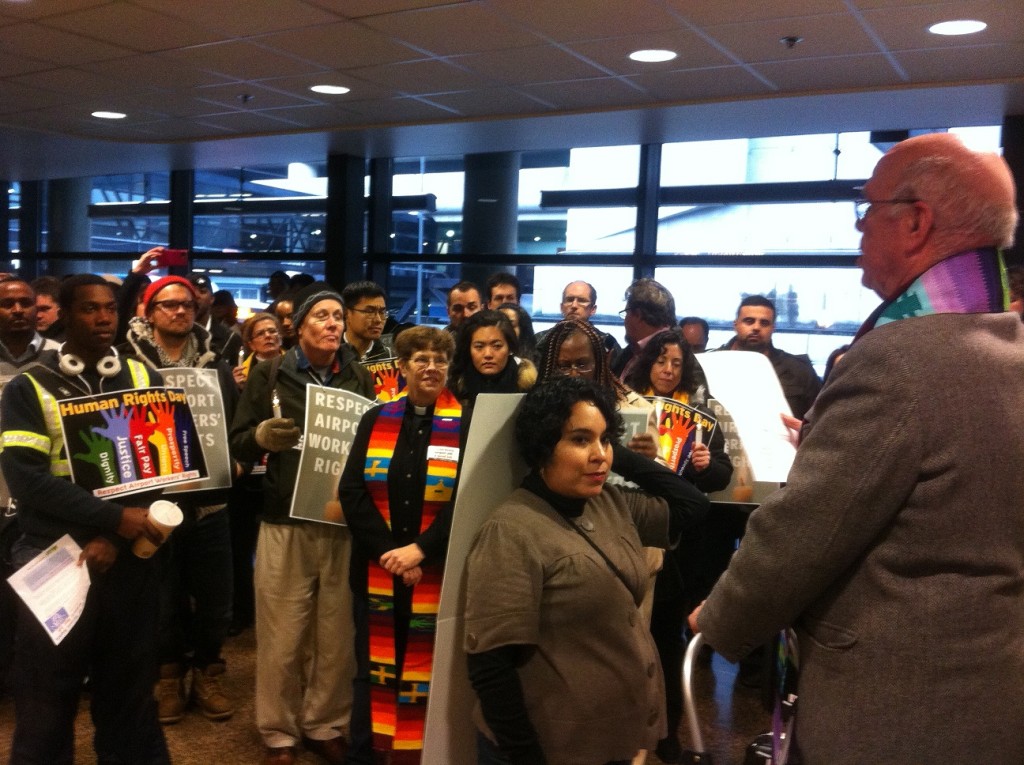 “That is the reason why we came out in support of the union,” said Sheikh Mohamed Ileye, imam of Al Noor Mosque near SeaTac. “Because we saw that for the union, this is not only a money issue. The unions support and respect the values and social rights of the people.” The imam’s endorsement swung many Muslim workers into supporting the wage campaign and enabled Working Washington to recruit organizers from the mosque.

The campaign against Alaska reached its peak at Alaska’s annual shareholder meeting in Seattle in May 2013 when 70 SeaTac campaigners virtually took over that session. As it opened, a line of pro-worker ministers marched to the front where the Rev. John Helmiere gave a benediction of thanks “for the profits produced by hard workers and skilled managers” and asking God to “teach us to use these blessing in the right way.”

When CEO Brad Tilden took charge of the meeting, pastors and Alaska travelers challenged him to raise the minimum pay. Protesters held mock debates about worker rights. There were chants of “union now.” Carol Harris, an SEIU union leader with a booming church choir voice, led a chorus of “Solid as a rock. Rooted as a Tree. We are here. Standing strong…for dignity.”

But Alaska Airlines faced down all the pressures, forcing the SeaTac campaign to use its ultimate strategy – the ballot. Activists circulated petitions for a popular referendum in the town of SeaTac on November 5, 2013, calling for a $15 minimum wage, sick leave and other job protections for workers at the airport and all over town.

It was an uphill battle because much of SeaTac’s electorate were older whites unsympathetic to the economic needs of an increasingly immigrant, colored SeaTac airport workforce.

Vocal opposition marked the SeaTac City Council session in late July when the ballot petitions were presented. Even so, the City Council voted unanimously to put Prop 1, as it became known, on the ballot. But Alaska Airlines immediately filed suit to block the referendum. The darkest moment came in September when a local judge threw Prop 1 off the ballot, but an appeals court restored it. 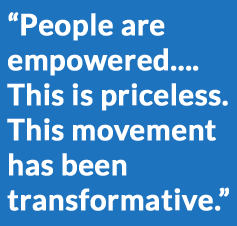 With that, the $15 minimum wage campaign gained momentum. For although the union organizing drives at SeaTac airport and the mass protests against Alaska Airlines had failed in the short run, they had fired up public engagement and enthusiasm for Prop1. All the early effort had forged alliances and mutual trust that played out powerfully in the homestretch.

The sheer daring of the $15 minimum wage ballot attracted national media attention. On local media, both sides fielded a steady stream of advocates. On the final weekend, as Washington’s mail balloting began, the SEIU flew in100 labor organizers from around the country to turn out the “Yes” vote.

The vote was so tight that the outcome was too close to call for several days. But in the end, the $15 minimum wage won by 70 votes out of 6,003 cast. The intense registration drive had provided roughly one-third of the ‘Yes” votes.

Even Employers Who Said NO… Raised Wages

On January 1, 2014, the $15 minimum went into effect for about 1,000 hotel and restaurant workers, taxi drivers and others in SeaTac town, but Alaska Airlines moved to block the $15 minimum wage for airport workers.

Alaska went to court with a lawsuit contending that the city of SeaTac had no legal jurisdiction over the airport because the airport was under the aegis of the Port of Seattle authority. A local judge agreed with the airlines, but the SeaTac coalition appealed the case. And then without any court action, Alaska airlines and the Port of Seattle suddenly declared a new minimum wage of $12.

In SeaTac, the economic impact was immediate and positive. Commercial parking lots that had bitterly opposed the referendum began touting the new $15 minimum in Help Wanted signs. Cedarbrook Lodge, a luxury hotel that had warned of layoffs if the initiative passed, unveiled a $16 million expansion. 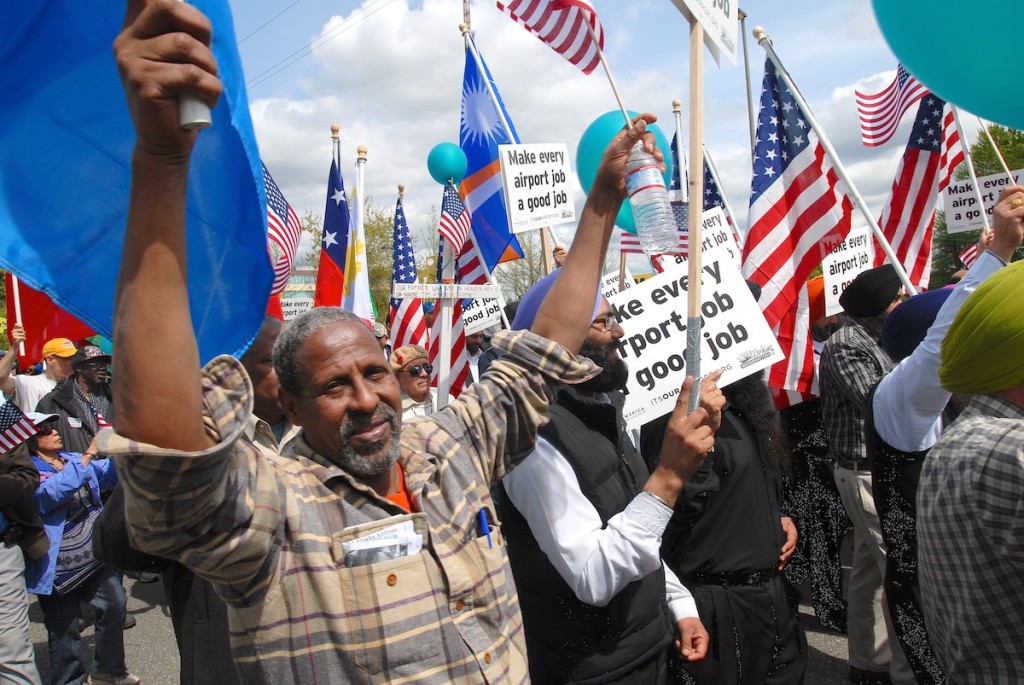 But 4,700 SeaTac airport workers were still denied the minimum pay raises because Alaska Airlines went to court to block the raise. After 18 long months, the Washington State Supreme Court ruled in August 2015 that the SeaTac minimum wage did apply to airport workers. But Alaska Airlines appealed yet again. Finally, on Nov. 30, 2015, the state supreme court issued its final order, giving the SeaTac coalition total victory and assuring that 4,000 airport workers would get retroactive pay raises back to January 2014 – up to $12,000 for some workers.

By march 2016, SeaTac workers enjoyed the rainbow’s pot of gold. While California and New York edged toward a $15 minimum in the 2020s. SeaTac airport workers got paychecks at $15.24 an hour, leapfrogging far ahead of high profile wage reforms in Seattle and San Francisco. The ballot proved a faster route then legislative bargains in progressive cities and states.

People Who Were Afraid Now Speak Up

But perhaps the most dramatic change was the revolution in people’s attitudes – the new mood of confidence among ordinary citizens. “People are empowered,” observed Mohamed Sheikh Hassan, leader of Orcas Mosque. “You see people who have never spoken up before, never had a voice, came here as refugees, and now they are empowered.

“This is priceless,” Hassan went on. “This movement has been transformative. People understand that they matter, they are valued, they are listened to. This is a new experience. This is the lesson we carry forward.”