The Green Light for Voter Reform of Gerrymandering

OLGA,WA – If you care about American democracy and you’re sick of politicians’ clinging to power by concocting political monopolies in their home districts, then take heart – and take a cue – from the recent Supreme Court decision that casts a shadow on partisan gerrymandering.

Take note, too, that in Florida the state supreme court just last week rejected the partisan gerrymandering of Congressional districts by the state legislature, declaring that it was tainted by the “unconstitutional intent to favor the Republican Party and incumbent lawmakers.” The justices, voting 5-2, ordered that the maps of eight Florida congressional districts be redrawn within 100 days.

Far more widely, gerrymandering in states with closed party primaries is undermining the integrity of our elections. It is distorting the results of the popular vote, handing a tiny minority of hardcore partisan voters the power to choose the ultimate winner, contributing to the demise of the moderate middle and fueling gridlock.

But gerrymandering’s most pernicious effect is voter fraud – disenfranchising millions of independent voters, now roughly 40% of the U.S. electorate. In most districts of populous states, independents and members of the minority party are gerrymandered out of any meaningful vote for the U.S. House of Representatives, election after election. 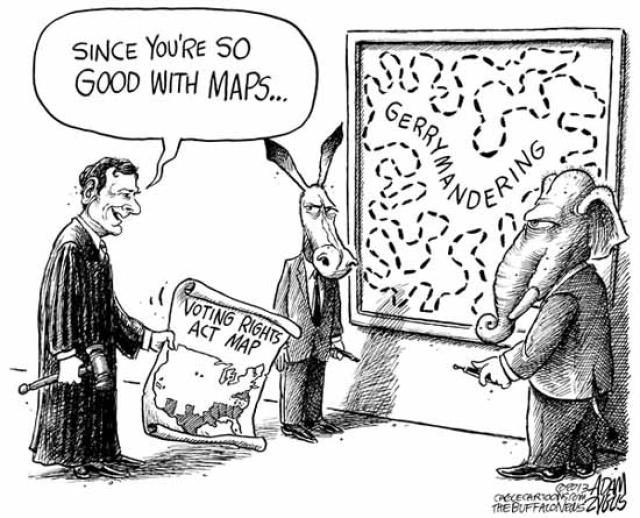 Of course, the artful manipulation of political districts has a long history in American politics. But now, as never before, sophisticated modern mapping software such as Maptitude, RedAppl, and autoBound, enables party strategists to carve and slice neighborhoods down to the precise block or household to magnify partisan gain.

Gerrymandering has literally leeched the competition out of most House races. The partisan hammerlock is so pervasive that 16 months before anyone casts a ballot in November 2016, a savvy political reporter can predict the outcome for nearly 90% of House seats. The contest is over before it starts.

Until last month’s Supreme Court decision, the fear was that ordinary voters were powerless to stop this electoral charade. But in a decision that now gives a green light to reformers seeking equity and true competition in Congressional elections, the high Court declared that rank-and-file voters have the constitutional right to take the job of mapping Congressional districts away from state legislatures and to set up an independent redistricting commission, as Arizona did by popular referendum in 2000.

Writing for the 5-4 majority, Justice Ruth Bader Ginsburg asserted that “the animating principle of our Constitution is that the people themselves are the originating source of all the powers of government.”

Right now, only six states exercise that power through independent, nonpartisan or multi-party commissions mapping the boundaries of political districts – Alaska, Arizona, California, Idaho, Montana and Washington. In Iowa, a nonpartisan agency drafts a redistricting plan, which goes to the legislature for a vote. Elsewhere, redistricting is done by partisan politicians.

The urgent need for gerrymander reform has been amply demonstrated in recent elections. In states like Connecticut, Massachusetts, Illinois and Maryland, Democrats stack the deck against Republicans. In many other states, Republicans rig the results.

Back in 2009, the Republican National Committee and key GOP strategists like Karl Rove conceived and mounted a secret plan to gain the upper hand. They called it RedMap – a strategy funded by corporate money and aimed at capturing control of state legislatures in the 2010 election in order to dominate redistricting after the 2010 census. As GOP political guru Karl Rove put it, “He who controls redistricting can control Congress.”

Then came the GOP gerrymander crunch, creating safe seats for Republicans and packing masses of Democratic voters into what the GOP saw as a few, relatively hopeless urban districts. It worked beautifully. In the 2012 Congressional election, Democrats won the nationwide popular vote for the House by 1.4 million votes. But the GOP came away with a 33-seat House majority. 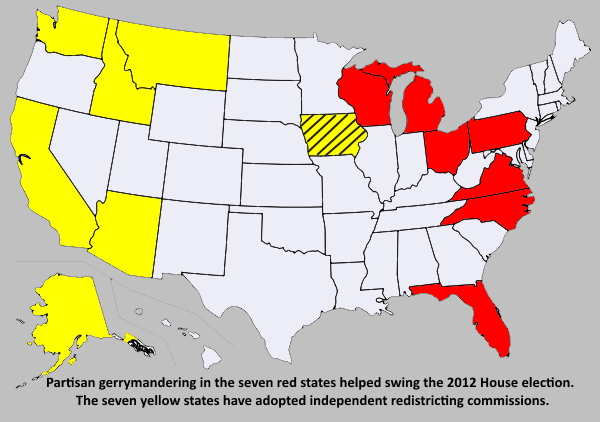 Seven states held the key – Florida, Michigan, North Carolina, Ohio, Pennsylvania, Virginia, and Wisconsin. In those states, GOP House candidates narrowly outpolled the Democrats, 16.7 million to 16.4 million. With 107 House seats at stake, the GOP share of the popular vote should have given them 54 seats to 53 for the Democrats. But aided by gerrymandering, Republicans garnered 73 seats to 34 for the Democrats. They won 19 extra seats, without which there would have been no House Republican majority.

So gerrymandering offers clear partisan advantage, but its damage to our democracy is far worse. Take Massachusetts, a state where Democrats do the gerrymandering and where 62% of the voters are either Independents or Republicans. None of those 62% get to vote in the Democratic primary, which is the decisive election for choosing that state’s nine House members. Their votes don’t count.

Add to that, turnout in many party primaries is extremely low, so low in some areas that as few as 3%-7% of electorate pick the ultimate winners and, as opinion polls show, the issue positions of those voters often differ sharply from the general public.

That small hardcore electorate attracts hardcore partisan candidates who tend to run harsh, negative campaigns. Moderate voters shy away and moderate candidates fare poorly. So the gerrymander system has contributed to the demise of moderate Republicans and centrist Democrats in Congress and to polarized gridlock in Washington.

That battle is already joined. Legal challenges have been filed in Alabama, Arizona, Florida, Texas and Virginia. The recent court victories of citizens’ groups in Florida and Arizona have given new impetus to reformers.

Those rulings, especially the Supreme Court’s decision endorsing Arizona’s independent redistricting commission, point to a potential solution in other states. But it will take grass roots civic action.