There’s another “Gerry-Roll” in Trump’s Horoscope

Washington – Trouble ahead on taxes and other priorities for President Trump and Speaker Paul Ryan from the Republican right-wing Freedom Caucus which successfully “Gerry-rolled” the supposed Powers-That-Be on health care.

The president has warned the gang of GOP right-wing rebels that he’ll be gunning for them in 2018, if they don’t toe the party line. But it’s an empty threat. Because the Republican renegades who defied and humbled Trump and Ryan on health care are protected by one of the classic Republican successes of the past decade, the gerrymandering of Congressional districts in 2011 that now allows about 40 right-wing House Republicans to cripple their own party leaders at will.

In September 2015, that same band of Republican insurgents overthrew former House Speaker John Boehner. The next month they blocked Majority Leader Kevin McCarthy from moving up to replace Boehner. They went along with Paul Ryan as Speaker because they figured he was a fellow renegade against the Republican establishment. But when Ryan tried to straddle between the Republican right and more mainstream Republicans in the House, the right-wingers mutinied and sank the ship rather than compromise.

Trump: “I’m Gonna Come After You”

No partisan Republican leader can bring them to heel. President Trump made a try – and failed. That spells more trouble down the road. 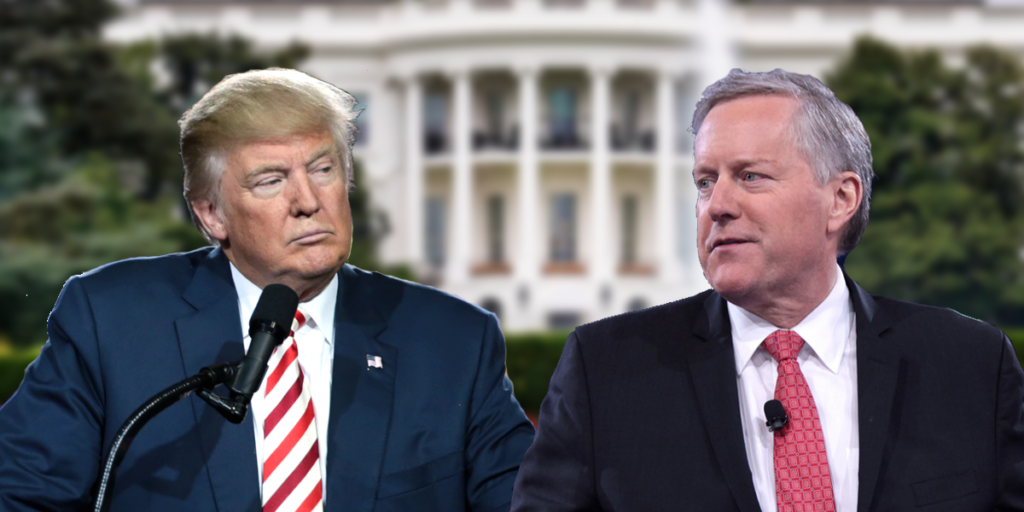 Trump’s first head-to-head test with the recalcitrant Freedom Caucus, organ of the diehard right wing of House Republicans, came three days before the finale. Eyeing Rep. Mark Meadows, the North Carolina Republican who heads the Freedom Caucus, Trump teasingly warned: “I’m gonna come after you,” presumably in 2018, if you don’t toe the party line and back Ryancare.

But in the end, it was the President who folded, not Meadows – after the Freedom Caucus out-bargained the supposed master of the deal. They pressured a reluctant President to use a bigger meat-axe to gut Obamacare. They got him to agree to abolish the Obama law’s requirements for “essential coverage” such as maternity care, mental health care, emergency services and much more.

Emboldened by winning those concessions, the GOP rebels demanded more, but Ryan understood that more concessions would fuel rising defections on his left flank, among moderate House Republicans already fearful that the GOP bill went too far and would hurt their low-income voters. In the crunch, Trump-Ryan were caught in a cross-fire. A solid bloc of the Freedom Caucus was still ready to vote “No,”  forcing Trump-Ryan to toss in their chips without even taking a vote.

Obviously miffed at the GOP renegades, Trump took a sarcastic swipe at the Freedom Caucus Monday with Tweets accusing them of having “saved Planned Parenthood & Ocare!” and handing the Democrats a win by stonewalling the Ryancare bill. “The Republican House Freedom Caucus,” he tweeted, “was able snatch defeat from the jaws of victory.”

Ryan: Republicans Not Ready To Govern

In a candid post-mortem, Ryan laid off the GOP’s disastrous loss to inexperience. Republicans, he said, were not yet ready to be “a governing party.” 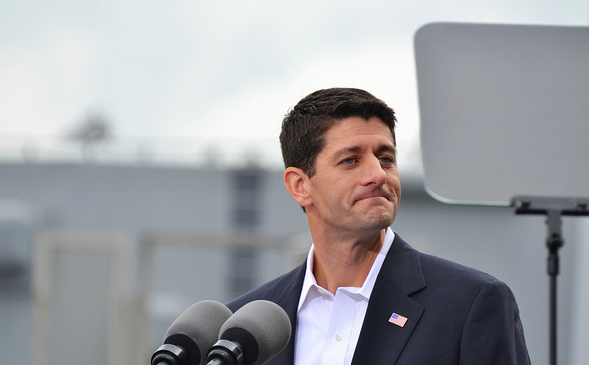 “We were a 10-year opposition party, where being against things was easy to do,” Ryan conceded. “You just had to be against it. Now, in three months’ time, we tried to go to a governing party where we actually had to get 216 people to agree with each other on how we do things…Moving from an opposition party to a governing party comes with growing pains. We’re feeling those growing pains today….Doing big things is hard.”

True, but that misses the crucial point. Why is it so hard for Republicans to govern?

Because they have a revolt within the family. Those Freedom Caucus renegades didn’t come to Washington to compromise. They came to challenge government, impose their anti-government ideology and to gum up the works if they don’t get their way. Twice they forced shut-downs of the federal government. Their tactics failed, but no one could punish or control them.

The key to the power of these Republican insurgents lies in a fundamental flaw in our political system – a structural defect that will continue to plague this president, this speaker and the next president and the next speaker. None of them has the power to fix the problem. Only We the People can do that.

The major villain of gridlock is partisan gerrymandering of Congressional districts. Thanks to Republican gerrymandering, all but three of those hard-line Republican renegades are guaranteed re-election in  wacky-shaped districts that have been carefully manipulated into de facto political monopolies that insulate them not only from Democratic challengers but also from the dictates of their party leadership. 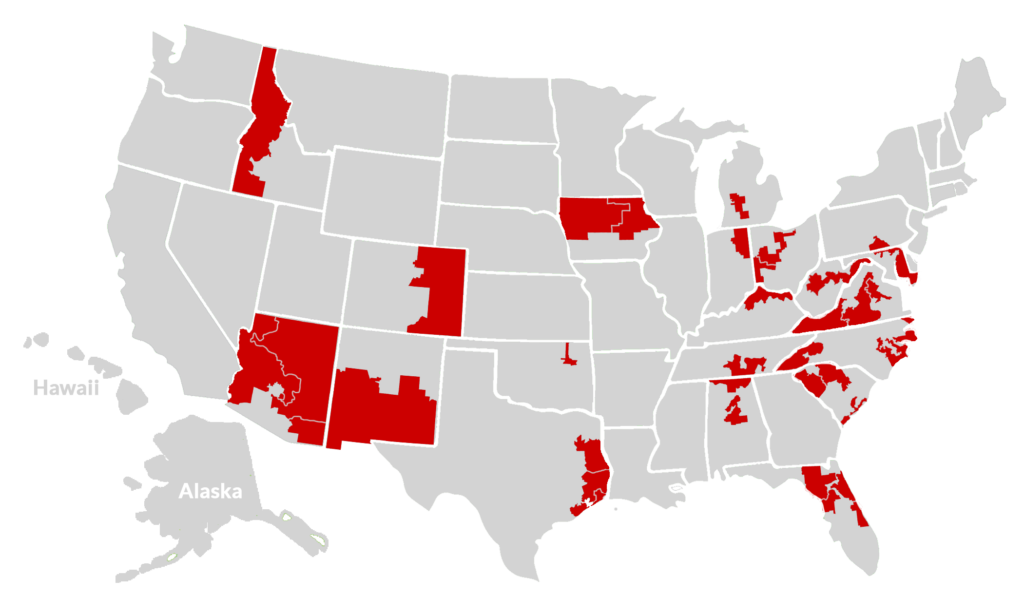 With sophisticated computer software, their district maps have been drawn to include friendly voter majorities that insure lopsided victories. In 2016, they beat their Democratic opponents by an average of 34 percentage points, a devastating margin, far greater than Trump’s winning margin in their districts. Only one of them had a competitive general election race. Two had such slam-dunk districts that no Democrat even bothered to oppose them.

Their lock on power was generated by RedMap, the brainchild of a Republican strategist named Chris Jankowski, drawing on the simple but powerful insight of Karl Rove, veteran Republican campaign guru, that: “He who controls redistricting, can control Congress.”

Upset by Barack Obama’s victory in 2008, Jankowski saw an opportunity for a Republican comeback if his party could capture control of as many state legislatures as possible in the 2010 election and dominate the once-a-decade process of drawing congressional district maps in 2011. And so Republicans poured $30 million, mostly raised from major corporations, on the 2010 RedMap campaign. Democrats were caught flatfooted. RedMap was a smashing success. Republicans picked up 675 legislative seats nationwide, putting the GOP in control of legislatures in states with 40% of all House seats, versus Democrats, with only 10%. (The rest were under split control.)

Of course, both parties have engaged in gerrymandering in one state or another for about 200 years. But never before in our history has either party mounted a national gerrymander strategy with control of Congress in mind.

The payoff for Republicans came immediately – in the 2012 election. Democratic House candidates won the nationwide popular vote by 1.4 million votes, but even so, the GOP wangled a 33-seat House majority. RedMap strategists could point to their gerrymandered maps that had swung a score of seats in pivotal states such as Florida, Michigan, North Carolina, Ohio, Pennsylvania, Texas, Virginia, and Wisconsin.

Is Gerrymandering a GOP Frankenstein?

But now, of course, there’s a hitch. The very strategy that helped give Republicans their House majority also created the safe seats for the hard-line ideologues of the Freedom Caucus, who are crippling their party leaders. And party leaders can’t fix gerrymandering from Washington, nor do they want to give away their partisan advantage.

If there is going to be a fix, it has to come at the grass roots, state by state, before the next nationwide remapping of congressional districts following the 2020 census.

The door to citizen action is wide open. Even though gerrymandering is entrenched, it is on the defensive. Nine states have set up independent bipartisan redistricting commissions or other politically neutral procedures to map election districts. Florida voters boldly passed a state constitutional amendment that outlaws gerrymandering “with the intent to favor” one party over the other. Lawsuits challenge gerrymandering in six more states and citizens movements or lawmakers have been trying to vote out gerrymandering in nine other states.

In short, reform is on the offensive in half of the 50 states and the U.S. Supreme Court has given the green light to citizen movements by ruling that popular ballot initiatives for gerrymander reform are constitutional. So it is now up to the voters to decide whether to take the necessary action.