Washington – No state has done more for voter rights and ballot access this year than Virginia, and women were the key drivers of those reforms.

Go back half a dozen years and Virginia’s state government looked Deep South and Deep Red. The Virginia legislature was run by Republicans, mastered and marshaled by men. Democrats were woefully outgunned. Women were not a factor in state power. They constituted only 24 out of a total of 140 state lawmakers.

But that comfortable Old Boys Club in the former capital of the Confederacy was in for a shock. The old power structure was flipped upside down in the last two state elections. Red turned Blue. Gender power changed.

The first Blue Wave hit Virginia’s politics big-time in the state’s 2017 off-year elections. It sprang from the exploding growth of the politically progressive high-tech corridors and well-educated suburbanite communities of northern Virginia, across the Potomac River from the nation’s capital, Washington, DC.

In the 2017 elections, Democrats flipped 15 Republican seats in the House of Delegates, and 11 of the new winners were women. The second Blue Wave in 2019 finished the job. Democrats took over seven more Republican legislative seats and added two more women. Suddenly for the first time in twenty long years, Democrats had charged into control of both houses of Virginia’s General Assembly, plus they had a Democratic governor.

It was a new day. With 40 women now elected to the two legislative chambers, women emerged in all the leadership positions – president pro-tempore of the state senate, House majority leader and for the first time in 401 years of Virginia’s legislature, a woman was elected Speaker of the House of Delegates, the historic political home of Virginia’s Founding Fathers.

Eileen Filler-Corn, the new Speaker, was known as a politically savvy, energetic, pragmatic, well-organized 55-year-old mother of two grown children with a solid track record during five terms in the legislature and previously, as a key staff aide for two former Democratic governors, Mark Warner and Tim Kaine. Her stunning elevation to leadership was widely heralded.

“It was humbling and also at first surprising, the number of people — especially young people — who came up to tell me how special it was to have the first woman speaker,” she told Washington Post reporter Gregory Schneider. “The fact that we have a more diverse General Assembly now is important. It represents communities that never had a voice in the past.”

Filler-Corn, who had helped campaign for some of her new feminine colleagues in 2017 and 2019, had an ambitious agenda. Early on, veteran Republican legislators tried to throw her off stride with parliamentary maneuvers. “I anticipated them (Republican lawmakers) to be adversarial, and they certainly did not disappoint — starting on Day One,” she said.

But Filler-Corn learned to parry their ploys, gained confidence as a leader and then showed her willingness to break with precedent by coming off the dais to marshal her own forces or to march across the state capital to the state senate to negotiate with the opposition to pass a budget. 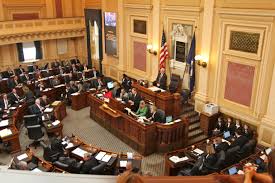 Coming into power, Filler-Corn and her new Democratic majority were riding a tide of pent-up demand for reforms on many fronts – women’s rights and the ERA, gun safety, a higher state minimum wage, improving the state’s road network, legalizing the sale of marijuana. LGBTQ rights. But no issue was high priority for the new waves of Democratic delegates or more central to Virginia’s political future than expanding access to the vote, long a sensitive and controversial issue in the Old Dominion state.

Often states do piecemeal reforms – one step one year, another step, the next year. But with Filler-Corn driving the legislative engine,  Virginia adopted a bold package of voting law reforms all in one fell swoop.

Passing a Package of Voting Reforms

In its short, 60-day session, the 2020 legislature passed automatic voter registration when residents renew their drivers’ licenses; same-day registration on Election Day when voters show up to cast their ballots; no-excuse absentee voting with mail-back prepaid by the state; federal-style protection of minority voting rights; and, perhaps the most striking, repeal of the Republican-imposed photo ID requirement for registration, which minorities claimed was blatant vote suppression and the federal courts had found racially discriminatory.

Most of these reforms passed on straight party-line votes, but the no excuse absentee ballot bill, top priority for its sponsor, House Majority Leader Charniele Henning,  got a 62-34 majority, with eight Republicans joining solid Democratic support. Democrats also won adoption of a pilot program to empower Virginia’s cities and counties to adopt rank choice voting as a local option.

But the Democratic majority split over a constitutional amendment for a gerrymandering reform plan authored by the 2018 Republican-led legislature. Needing approval by this legislative session, the GOP reform measure was opposed by the Democratic leadership and the Black Caucus, objecting that it did not guarantee minority participation in a new bipartisan redistricting commission and did not remove lawmakers from the redistricting process. But it passed easily in the Senate and also won in the House with nine Democrats joining 45 Republicans in favor The amendment now requires approval from voters in a popular referendum next November.

On election law reforms, Virginia’s legislative session was an historic breakthrough, cutting a stark contrast with other southern states, such as North Carolina, Alabama, Florida, Georgia, or Texas, all still mired in ongoing political battles over voting rights and ballot access.

“We did a lot,” was Filler-Corn’s modest assessment. “We were efficient, we were effective and also fair.”