The Untold Story of Campaign 2016

Washington – The untold story of Campaign 2016 is that political reform is on the move in grass roots America. Not just Bernie Sanders’s trumpet call for a political revolution, but citizen movements at the state level pressing for political reforms against Citizens United, partisan gerrymandering and dark money to make elections fairer, ease gridlock in Washingtron and give average voters more choice..

With Congress gridlocked, the initiative on reform has shifted to the states. And the infectious spark of insurgency has spread to such unlikely conservative bastions as Arizona, Florida, Idaho, Indiana, Nebraska and South Dakota.

Already this year, 17 states have become reform battlegrounds.  In half a dozen  – Alabama, Maryland, North Carolina, Texas, Virginia and Wisconsin – lawsuits now challenge racial or partisan gerrymandering. In four others, there’s a push for gerrymander reform by citizen movements or by state legislators.

Clean elections proposals and laws to expose campaign dark money are on the ballot in four states – Florida, South Dakota and Washington State. And in California, New York and Washington State,  the drive is on to roll back Citizens United and enact a constitutional amendment to bring back controls on campaign funding, a move which Democrat Hillary Clinton has just vowed to push during her first month in office, if elected President. 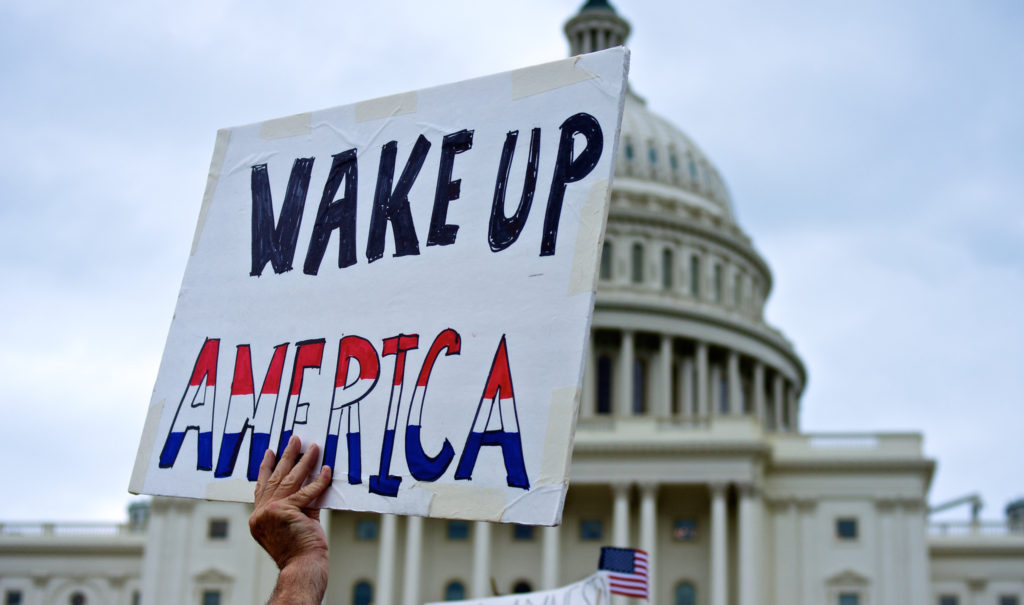 The impetus for this populist backlash has come from two political thunderbolts that since 2010 have changed the dynamics of American politics.

The first trigger was, of course, the Supreme Court’s Citizens United decision that, as dissenting Justice John Paul Stevens warned, would “unleash the floodgates” of corporate money into American campaigns. The funding flood this year is already destined to surpass the record high tide of $7 billion spent in 2012.

The other catalyst is the Republican Party’s enormously successful “Redmap” strategy that enabled the GOP to win control of enough state governments in 2010 to carry out gerrymandering of congressional districts on a national scale in 2011 after the latest census. Redmap was so effective that in 2012, Republicans won a 33-seat majority in the House of Representatives, even though Democratic candidates for the House got 1.5 million more votes.

A growing body of independent voters (who now outnumber both Democrats and Republicans) are starting to realize that in a political system where close to 90% of the districts have been gerrymandered into one-party monopolies, independents are being denied a vote on what are in fact the decisive elections for the House  – the party primaries.

The Backlash Vs. Citizens United

In the backlash against Citizens United, New York has just become the 17th state that either through popular vote, legislative resolution or collective letters from lawmakers, has called on Congress to overturn the Citizens United decision and approve a constitutional amendment that restores the power of Congress and the states to regulate campaign funding 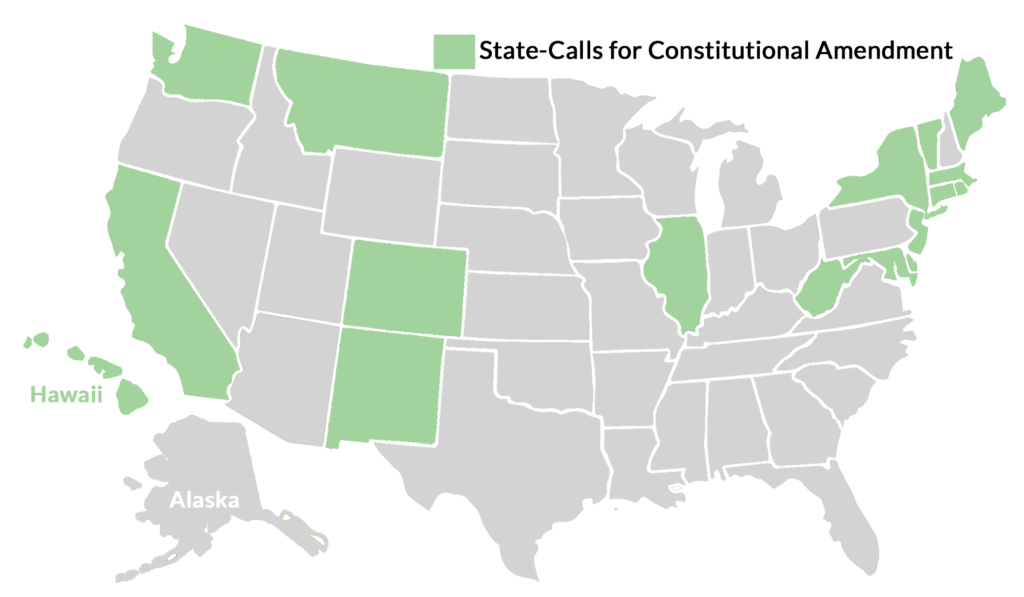 The biggest showcase for the populist revolt against Citizens United will come in November when 18 million Californians get to vote on an initiative to instruct California’s 55-member delegation in Congress to “use all of their constitutional authority…to overturn Citizens United vs FEC and other applicable judicial precedents.”

Four years ago, similar measures swept to overwhelming popular majorities in Colorado (74% in favor) and Montana (75%). The measure was supported across the political spectrum. In Colorado, it carried all 64 counties – red, blue and purple.  It’s on the ballot in Washington State as well as California this year.

Congress has already tried to move on this issue. In September 2014, a proposal for a constitutional amendment by Senator Tom Udall (D-NM) won a 54-42 majority, but fell short of the 60 votes needed to prevent an opposition filibuster.  All 42 “No” votes came from Republicans and all 54 “Yes” votes came from Democrats.

Proposals for other political reforms are stacked up on Capitol Hill, like jets over an airport in a storm, forever circling. Bills calling for a 6-1 match of public funds for small campaign donations up to $150 or requiring disclosure of the funders of campaign ads have wide support among Democrats, but are blocked by solid Republican opposition.

Yet out in the country, even some reliably red states have become the venues for reform movements. South Dakota, for example, has an ambitious reform menu this year thanks to grass roots petition drives. It has two proposed constitutional amendments  – one for a non-partisan primary, giving independents a voice, as in California, and the other, for an independent commission to take gerrymandering out of the hands of the legislature.

A third ballot measure would provide for $50 democracy credit for each voter; bar campaign contributions of more than $100 by lobbyists and state contractors; and mandate that independent groups speedily disclose the top five contributors on political ads and communications made within 60 days of an election.

Washington State and Idaho have similar Clean Elections initiatives on the ballot for a popular vote next November. In Florida’s Miami-Dade County (pop: 2.6 million), a politically diverse coalition known as Accountable Miami-Dade is pushing for a referendum on a measure to block country contractors from contributing to campaigns and to provide a 6-1 public funding match for small campaign donations up to $100. Major drives for similar reforms were mounted iN Idaho and Arizona but failed to gather enough signatures to get on the ballot.

What is especially surprising is the breadth and depth of the grass roots challenge to partisan gerrymandering, still entrenched in 39 states, helping to fuel gridlock in the House of Representatives by making primary elections, which are favorable turf for extremist candidates, the gateway to Congress. 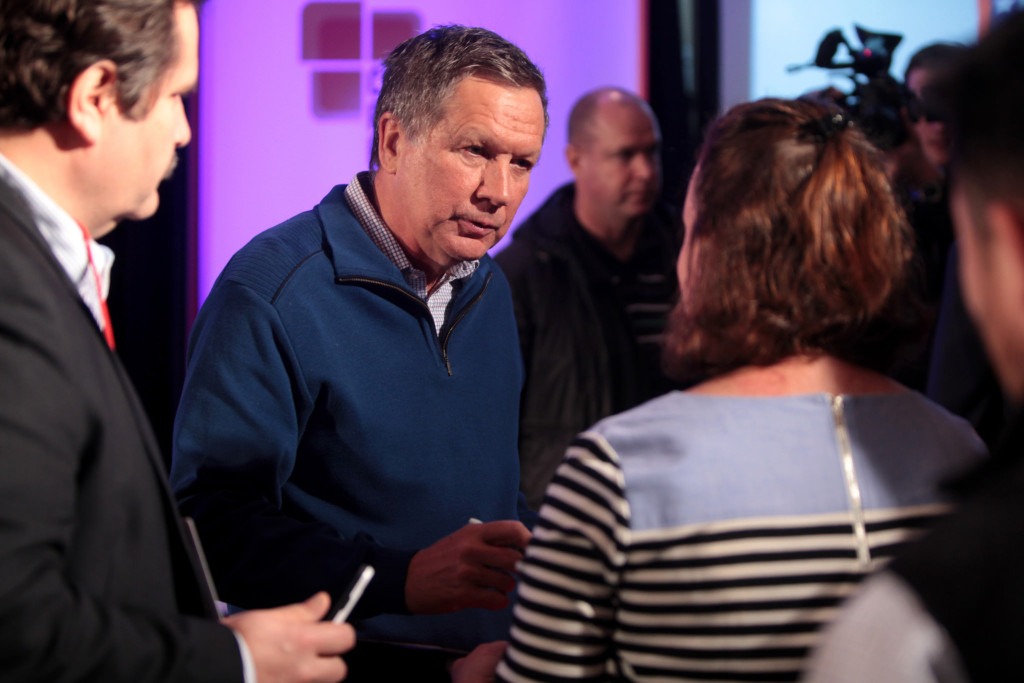 Two dozen states have gone to war over gerrymandering. Eleven have set up independent redistricting commissions or other politically neutral mechanisms. Legal challenges have been mounted in half a dozen other states. In seven more, including heartland states like Illinois, Indiana, Nebraska, Ohio, and Pennsylvania, popular movements, legislators and even Republican governors such as Mike Pence of Indiana and John Kasich of Ohio have said it’s time to fix gerrymandering

In the midst of his presidential bid, Governor Kasich won resounding applause from his home-state Ohio legislature in April when he declared: “Ideas and merits should be what wins elections, not gerrymandering. When pure politics is what drives these kinds of decisions, the result is polarization and division.  I think we’ve had enough of that.  Gerrymandering needs to be on the dust bin of history.”