Washington – In the end, winning elections rides on voter turnout – who votes and who doesn’t get to vote. Slowly, finally, the media gets around to the voters and, maybe, to America’s yawning voter gap – 41 million missing American voters, citizens eligible to vote but not registered.

Ever since the conventions, the media buzz has been about Donald Trump’s going off message to pick fights with a former Miss Universe or military Gold Star families and his nonsense about President Obama’s being “the founder” of ISIS, or else the buzz was about Hillary Clinton’s gaff about Trump’s “basket of undesirables” or her controversial email server. Even so, under the media radar, the turnout war rolled on, a deadly serious, low-profile legal battle over how to tilt the political scales on November 8.

The media gets to turnout late in the game because it has a tried-and-true script for campaigns – primaries, conventions, selection of running mates, the post-convention “bounce” in the polls, rivals ramping up after Labor Day in battleground states, the inevitable tightening polls, and then, presidential debates and handicapping the polls in swing states. Finally, in the homestretch, the media will start telling us – as if it just discovered this idea – that the whole race hinges on voter turnout.

But the turnout war has been waged for   six years – fought first in state legislatures and then in the courts. And this summer, there have been some key court decisions in swing states like North Carolina and Wisconsin that could have an impact on turnout and the outcome.

As a party with weak demographics (poor showing among the growing constituencies of women, minorities and youth), Republicans took the offensive in the voter turnout war after sweeping to dominance in 26 state governments in the 2010 election (vs. 16 for Democrats and 8 with split control). 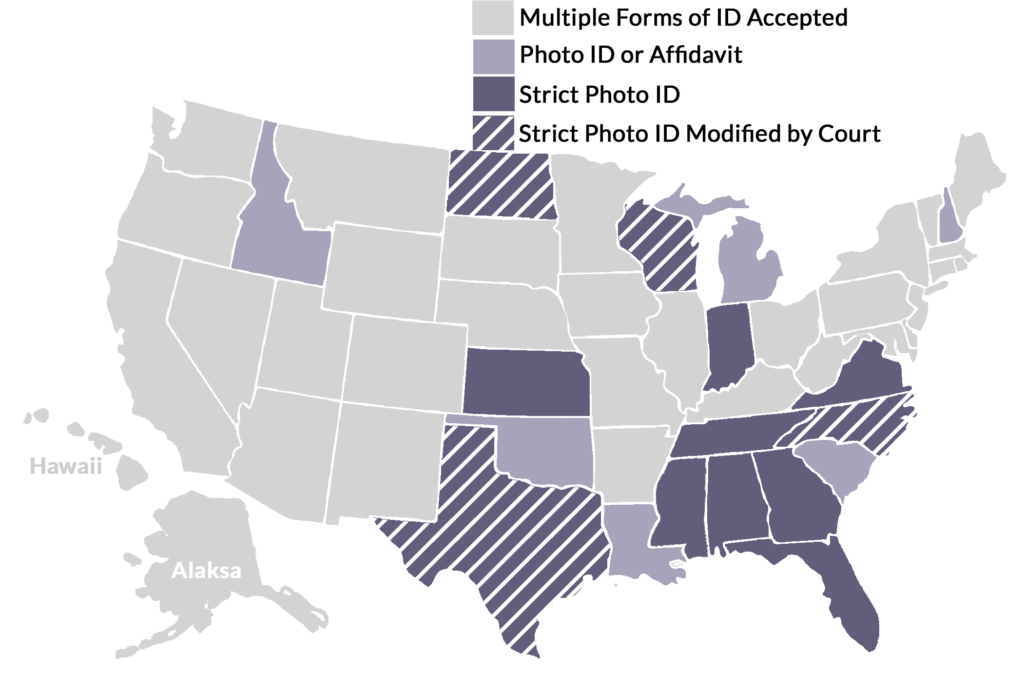 Republican control generated new restrictions on voters and voting that go into effect for the first time in this year’s elections in 16 states. Some have cut back early voting days or voting hours. Others have been purging voter rolls.

But the bluntest instrument in the GOP arsenal is the strict new legal mandate in 11 states that limits access by requiring a government-issued photo ID to register and vote, typically from a very short list. In 11 hard-line states, Republican governors and legislatures insisted that strict photo ID rules were needed to prevent voter fraud, even though little evidence of significant voter fraud was ever produced and even though 39 other states accept non-photo ID, the last four of your Social Security number or sworn personal affidavits as sufficient.

Eight of the 11 hard-line states have typically gone Republican in presidential elections – Alabama, Georgia, Kansas, Indiana, Mississippi, North Dakota, Tennessee and Texas. But three are crucial swing states – North Carolina, Virginia and Wisconsin, where turnout can tip the scales. So voting rights advocates have gone to court and won rulings striking down or modifying the tough photo ID laws in four states.

Photo ID’s may sound sensible, but they’re a huge obstacle to voter turnout, if not an outright device for suppressing the vote. Their impact is potent. The investigative arm of Congress, the General Accountability Office or the GAO,  did its own investigation and established that photo-ID requirements definitely depress voter turnout, as critics contend.

In Kansas and Tennessee, the GAO found a decline in turnout of two or three percent from the 2008 to the 2012 presidential election after strict photo ID laws were applied, by comparison with other states that do not have strict photo-ID laws. The declines were sharpest among African-Americans, new voters, and 18-to-23-year-olds, the GAO said.

One big boon in the past two months for minority, senior and young voters and for Democratic Party turnout drives have been a series of federal court rulings overturning  photo ID laws in Texas, North Carolina, and North Dakota and modifying the photo ID law in Wisconsin, as well as restoring early voting days in Ohio. But there have been charges that Republican-dominated local election boards are trying to skirt those court rulings.

Why Does the U.S. Have Such a Huge Voter gap? 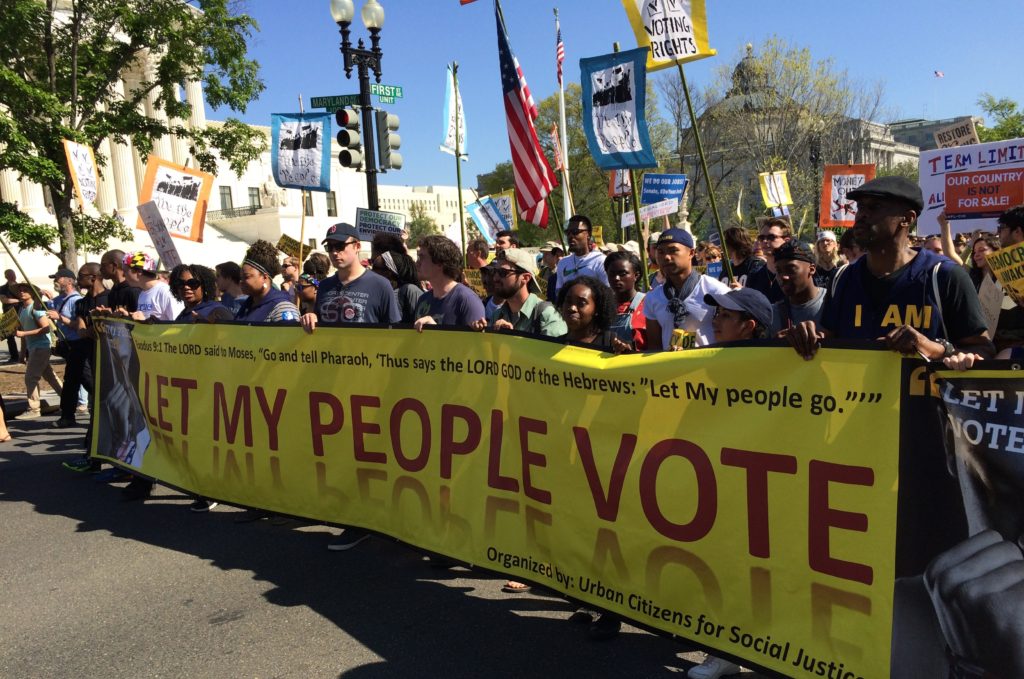 Our voter gap is enormous. In 2014, the U.S. Census Bureau reported that only 142 million out of 219 million voting-age U.S. citizens were registered to vote. By its count, at least 41.1 million said they were not registered and another 37 million were in doubt, because they failed to answer the question about whether they were registered.

What’s more, the Brennan Center for Justice at New York University Law School reported that about 11% of voting-age Americans, or roughly 21 million people, lack government-issued ID. The proportion was 25% among African-Americans versus 8% among whites. The Brennan Center study, based on national surveys done in 2006 and 2011, also found that for many low-income, elderly, poor and minority Americans, obtaining a government-issued photo ID is often a lengthy, costly, and well-nigh impossible process, given lost records and frequent misspelling of names in official documents.

In addition, 6.1 million people (one in 40 adults) are barred from voting by state laws that prohibit people with felony convictions from casting ballots – a disenfranchisement that falls disproportionately on blacks and Hispanics, according to a  report by The Sentencing Project, a non-profit organization that focuses on criminal justice reform. Experts report that on certain crimes such as possession or use of illegal drugs, black or Latino defendants are more likely than whites to be charged with felonies, thus disproportionately affecting their voting rights.

Some of the harshest laws that levy a lifetime voting ban on felons are imposed by three important political swing states – Florida, Iowa and Virginia.  In Florida, a stunning ten percent of the adult electorate is barred from voting because of these restrictions.  “These are felonies and we want to make sure people have turned their life around,” Florida Gov. Rick Scott told The New York Times. In the tight 2000 presidential election, the margin of victory between Al Gore and George W. Bush in Florida was 537 votes, but an estimated 600,000 people in the state had completed their prison sentences but were not allowed to vote.

Fourteen states automatically restore voting rights when a person convicted of a felony has completed his or her sentence and is released. People with past felony convictions are disproportionately young and less educated.  “We only think of people (just) coming out of prison, but the majority of people whose rights are not restored are people living in our communities,” comments Desmond Meade, president of the Florida Rights Restoration Coalition, a group working to restore civil rights for felons.

Another major reason why so many millions of Americans are either unregistered or uncertain about their status is that so many people move their residence between elections, and in most states moving nullifies their voter registration, even if they moved within the same state.

“Many Americans falsely believe that their registration automatically updates when they move,” Barry Burden, a political scientist and director of the Elections Research Center at the University of Wisconsin-Madison, told our researcher and colleague, Jonathan Nesvig. “Residency requirements in many states effectively disenfranchise recent movers. It is not surprising that young people and other groups that are more transient are less likely to register and vote.”

Other advanced countries, especially in Europe where voter participation in elections typically runs much higher than in the U.S., automatically re-register their citizens when they move from one location to another.

“In some European countries, citizens’ voter registrations will automatically move if the citizen does,” explains political science professor Jim Moore of Pacific University in Oregon. “No need to re-register. They just note where your utility (or tax) bill is being paid and that’s where you are registered to vote….Their concept of democracy is not that (voting) is a privilege, but that it is a right that all citizens share.”

Their bill, co-sponsored by Senators Dick Durbin of Illinois and Amy Klobuchar of Minnesota, is aimed at making voter registration far easier, cheaper, and more accurate. It requires that every time an American of voting-age interacts with a variety of state or federal agencies that person will be “automatically” registered to vote unless the person specifically asks not to be registered.

The automatic registration system will go into effect at agencies currently required by the National Voter Registration Act of 1993 to provide voter registration services, such as each state’s DMV (Department of Motor Vehicles) , social service agencies, and agencies serving people with disabilities.

A similar bill was introduced in the House last year by Rhode Island Democrat David Cicilline with 100 co-sponsors. No Republicans have signed on to the House or Senate version. But now, eying potential control of the Senate after the 2016 elections, Senate Democrats are pushing hard on this issue. “There is no reason why every eligible citizen cannot have the option of automatic registration when they visit the DMV, sign up for healthcare, or sign up for classes in college,” says Leahy. 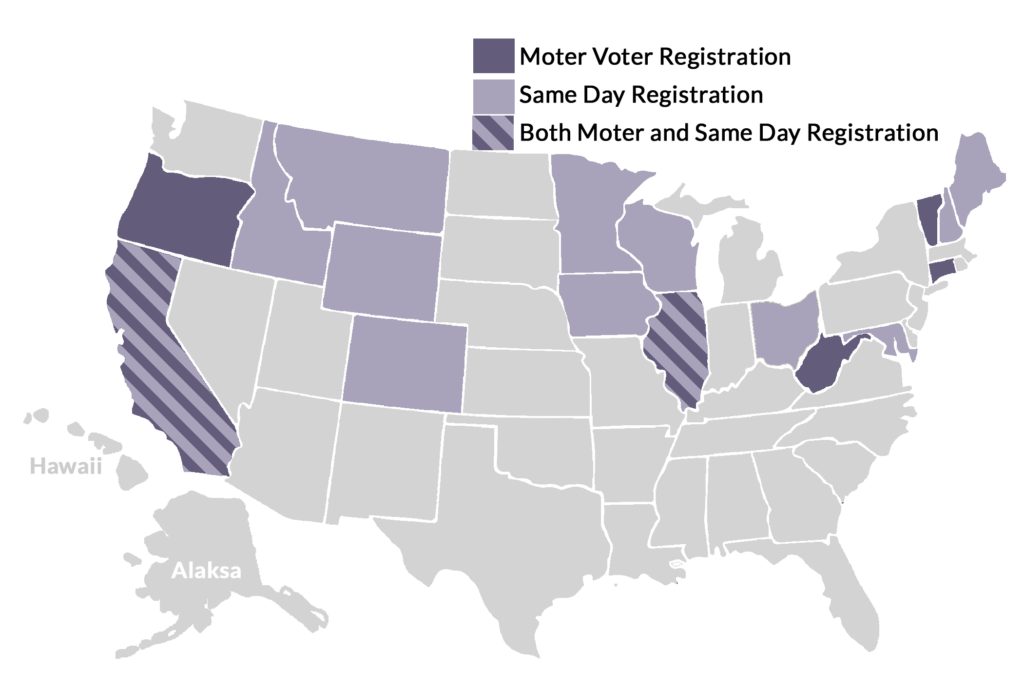 Given inaction in Congress, half a dozen American states, led by Oregon, have adopted a form of automatic registraiton by passing Motor Voter laws, that ensure automatic registration when people first get or renew their driver’s licenses.

In addition, 13 states have adopted same-day voter registration, which enables people to update their voting records by letting them register at the same time they come to polling stations to vote.

As same-day and motor voter registration start taking effect in states typically dominated by Democrats, officials predict a surge in America’s voter rolls and a narrowing of the voter gap. California, for example, has an estimated 6.6 million residents eligible to vote but not registered. In 2017, once its recently adopted Motor Voter system swings into operation, Secretary of State Joseph Padilla predicts “a huge influx of new voters – and that’s good for our democracy.”