Washington –  SuperPACs in 2016 were  breaking records  once again – close to $1.6 billion raised – but there was a new twist. Instead of putting top priority on the presidential race, SuperPACs, political parties and independent donors poured more money into the battle for control of the Senate – $616 million, plus millions more to be reported after the final week.

What is especially stunning is that 85% of the money flowing into seven swing-state Senate races – or roughly $468 million – came from out of state, according to a new study by U.S. PIRG, the public interest research group. The most extreme case was New Hampshire, where 95% of the funds came from outsiders who don’t live in the Granite State.

In fact, independent groups outspent both major parties and their candidates on buying TV ads for Senate races, according to Michael Franz, a Bowdoin College professor who tracks broadcast ad spending. “The proportion of outside spending is at an all-time high,” says Franz. And  80% of all that money goes for negative attack ads, the Center for Responsive Politics reports. 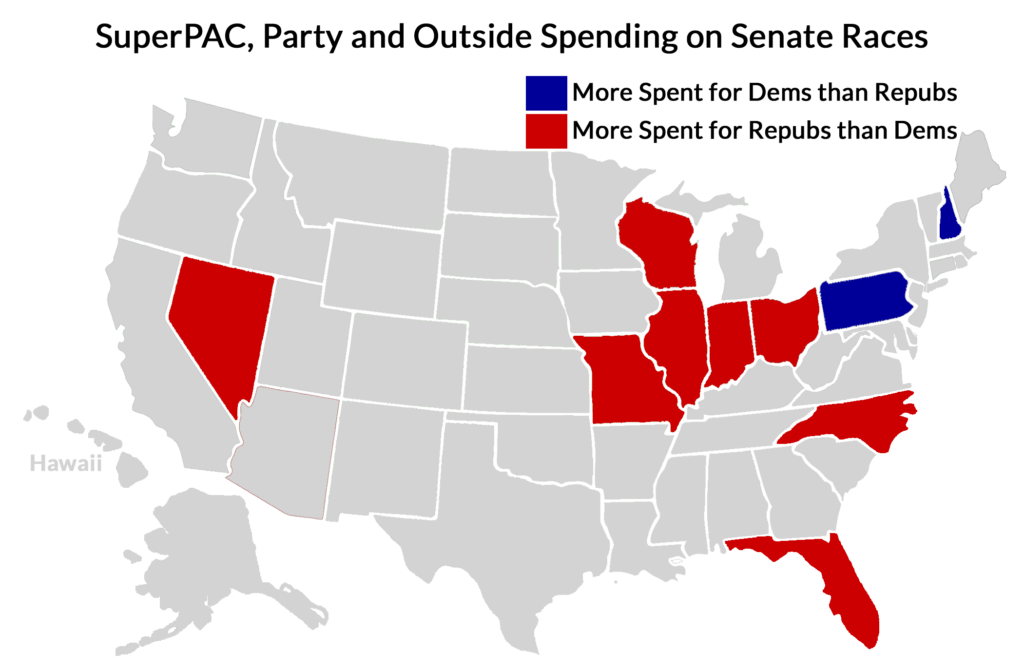 Overall, the Niagara of money now cascading into Senate races is unprecedented  – a record $154 million in Pennsylvania; $117 million for tiny New Hampshire (pop 1.3 million); $111 million for Nevada; $90 million for Ohio and $270 million more for Florida, North Carolina, Missouri and Indiana, according to the Center for Responsive Politics, which tracks political money, based on campaign reports to the Federal Election Commission by candidates, parties and independent groups.

Republican vulnerability is what made this year’s political combat so intense. A shift of four Senate seats would have wiped out the GOP’s 54-46 Senate majority and hand the Democrats control, if Hillary Clinton had won the White House, giving her vice president the deciding vote in the Senate.

The peril was acute for the GOP because Republicans swept the 2010 mid-term elections and now have 24 Senate seats at risk this year, versus only 10 for the Democrats. They faced a tough fight even before Donald Trump’s lewd sex tape and incendiary stump talk caused his poll numbers to swoon and down-ballot Republican candidates to run for cover. By early fall, Democrats seemed headed for an easy gain of the Senate seat in Illinois.

On election eve, with Republicans certain to hold their once-endangered seat in Ohio, the fate of the Senate hinged on seven races – six Republican-held seats in Indiana, Missouri, New Hampshire, North Carolina, Pennsylvania and Wisconsin, and one Democratic seat in Nevada.

In this year’s trench warfare over the Senate, outside groups like superPACs and political nonprofits  poured in more money than the Democratic and Republican parties and their candidates, combined. Back in 2002, outside groups accounted for about 5% of spending on political campaign ads, according to Bowdoin College professor Michael Franz. But this year, Franz told me that outside funders shelled out 63% of the pro-Republican funding and 53% on the Democratic side. 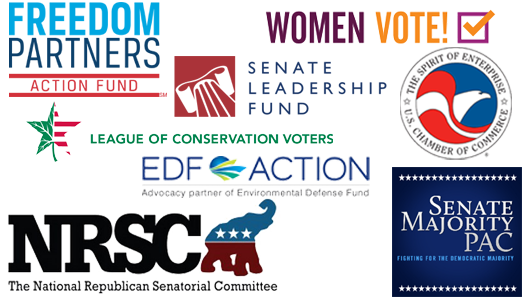 That trend took off last July, long before Speaker Paul Ryan and other Congressional Republicans finally broke away from Trump. After the Republican convention, the billionaire Koch Brothers and other right-wing MegaDonors gave up on Trump and saw the handwriting on the Senate wall. They opted out of the presidential race and decided to deploy their vast war chests to keep the Senate in the hands of a friendly, pro-business Republican majority.

“We think we can be most effective working on the Senate,” Tim Phillips, president of Americans for Prosperity (AFP), the Koch network’s flagship group, told reporters. Since then, the funding network of the super-rich, organized by brothers Charles and David Koch, has poured $38 million through AFP and the Freedom Action Partners Fund into Senate races, mainly in Pennsylvania, Ohio and Nevada, according to the Center for Responsive Politics, which tracks political spending. Much the same goes for the U.S. Chamber of Commerce, another major player, which also snubbed Trump and has funneled nearly $25 million into Senate races.

Not to be outgunned, the Democrats have marshaled their own financial armada, anchored by $100 million from the party’s Democratic Senatorial Campaign Committee and the nominally independent Senate Majority PAC, according to daa from the Center for Responsive Politicss. Those two groups concentrated their money on bankrolling pro-Democratic attack ads against first-term Republican Senators Kelly Ayotte in New Hampshire, Pat Toomey in Pennsylvania, Marco Rubio in Florida and Rob Portman in Ohio.

The Democratic cause has gotten nearly $30 million more in outside funding from Planned Parenthood, the League of Conservation Voters, the Environmental Defense Action Fund and Women Vote, the political arm of the progressive women’s organization, Emily’s List, plus $15 million in well-targeted funding from a few key labor unions.

Given the enormous sums focused on a handful of races, it’s obvious that the smart money in both parties is betting that the ultimate outcome in the Senate will turn on results in three extremely tight races in New Hampshire, Pennsylvania and Nevada, or if further erosions in Trump support eat more deeply into the Republican base, then Missouri and North Carolina as well. 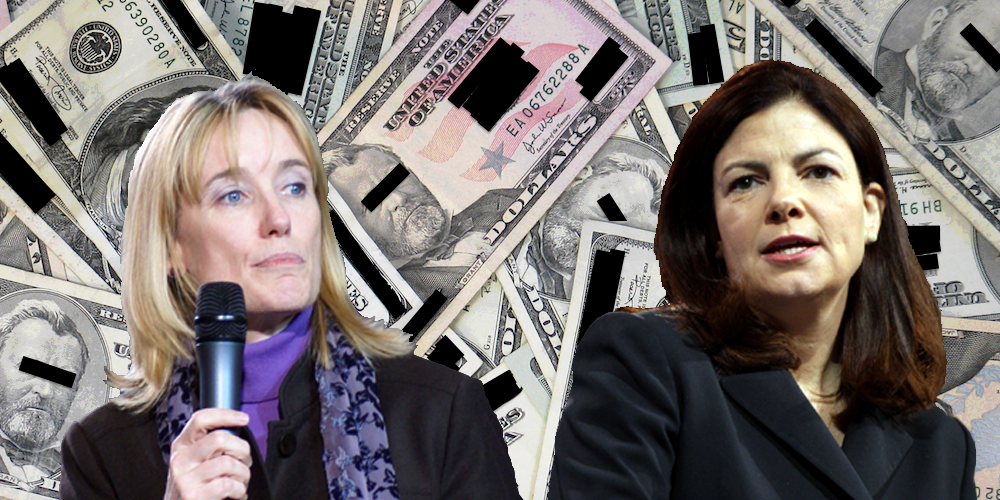 From the outset, conservative strategists for Karl Rove’s Crossroads network knew Ayotte faced a tough race and so they set up Granite State Solutions, a special SuperPAC to back Ayotte. With money from out-of-state billionaires like Las Vegas casino owner Sheldon Adelson and some conservative SuperPACs,  Granite State Solutions has already spent $19 million and reportedly plans to spend several million more to tear down Hassan to help Ayotte. Democratic SuperPACs have counter-punched with waves of attack ads casting doubts on Ayotte.

Although the two rivals have clashed on the issues,  their campaigns and ad blitzes have morphed into a Clinton-Trump proxy war. The Ayotte camp has painted Hassan as a Clinton rubber-stamp and the Hassan camp has tried to make Trump Ayotte’s albatross. Asked in a debate whether Trump was a role model for children, Ayotte tried to sidestep, but having said she would vote for Trump, she finally assented. Immediately after the debate, she backed off, saying she “misspoke.”

In Pennsylvania: A Clinton-Trump Sub-Text 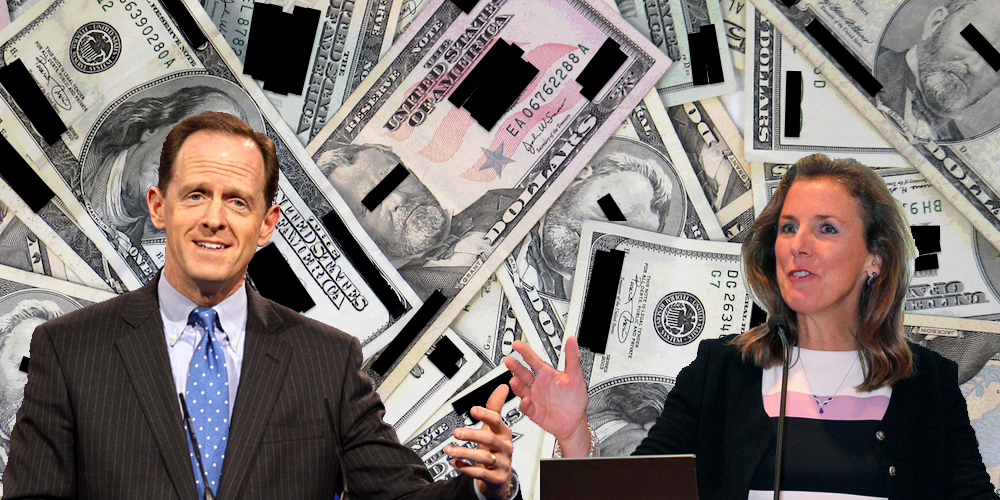 Working the negatives of both Trump and Clinton has also been a favorite tactic in another cliffhanger Senate race in Pennsylvania, where liberal Democrat Katie McGinty, a first-time candidate who was chief of staff for sitting Governor Tom Wolfe, has taken on veteran Pat Toomey, a pro-life, free trade, pro-business, right-wing Republican.

In both ads and on the stump, Toomey and his partisans have sought to drag down McGinty, who served as a senior environmental adviser to Bill Clinton, by trying to embarrass her with Hillary Clinton’s email problems, while McGinty has mocked Toomey as ” ‘fraidy Pat” for his refusal to say whether he would vote for Trump and his awkward acrobatics trying to appeal to both pro-Trump and anti-Trump Republicans with his flip-flops on trade and straddling on gun issues.

As a former banker and favorite of business groups, Toomey has attracted close to $50 million from the heavy guns of the Koch network, the U.S. Chamber of Commerce, the Senate Leadership Fund, and Michael Bloomberg’s Independence PAC, while the Democratic Majority PAC and a bevy of pro-Democratic funders have invested roughly $57 million in hopes that their savaging  of Toomey will put McGinty in the Senate and give Democrats a crucial win toward a Senate majority.

Will Nevada Be a Republican Firewall? 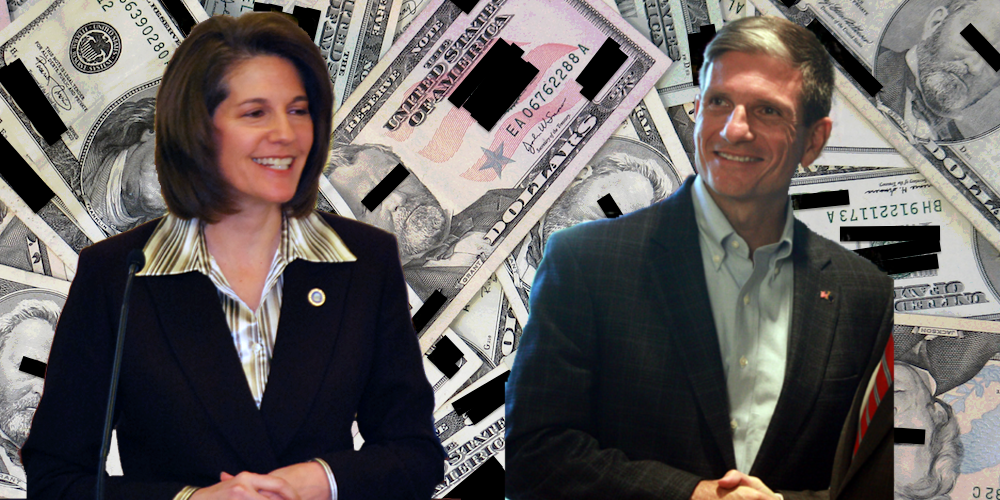 But with more than $50 million in TV attack ads already aired and another $15 million booked before Election Day, the Reno Gazette-Journal  commented that the race seemed more like a battle between the Wichita, Kansas energy mogul Charles Koch and Chicago media mogul Fred Eychaner. Koch has donated $6 million to Freedom Partners Action Fund, which spent the money attacking Cortez Masto, and Eychaner donated $6 million to the Senate Majority PAC, which spent it on slashing Heck.

In short, outside groups have muscled their way into becoming the heavyweights influencing the election in Nevada, spending far more than the candidates themselves. As political scientist David Damore of University of Nevada Las Vegas observed, “This is a race where to some degree the candidates are losing control of the messaging”  – a truism that applies to the most pivotal Senate races all across the country.