In his short White House tenure, Donald J. Trump has set some kind of record for histrionic temper tantrums against the media — whether CNN, The Washington Post, The New York Times or, most recently, MSNBC for revealing his 2005 tax return. He’s actually pursuing a well-worn path of American presidents blaming the press for their problems.

Five decades of reporting have taught me that whenever a president starts screeching about the media, it’s a sure sign he’s in hot water and fearing revelations about some policy disaster, damaging mendacity or political villainy.

Even popular presidents with reputations for charming the press occasionally stoop to blaming the media for quagmires of their own making.

Kennedy Wants to Get Rid of Halberstam

In September 1963, with the Vietnam war escalating and the pro-American authoritarian regime of President Ngo Dinh Diem besieged by popular protests, President John F. Kennedy used a private meeting with the New York Times’ publisher, Arthur Ochs Sulzberger, and James (Scotty) Reston, the Washington bureau chief, to charge that David Halberstam, the Times correspondent in Saigon, was undermining the American war effort and to pressure the publisher to pull Halberstam out of Vietnam.

President Kennedy was particularly angered by a stream of graphic front-page stories by Halberstam, describing battlefield defeats and the self-immolations of Buddhist monks. 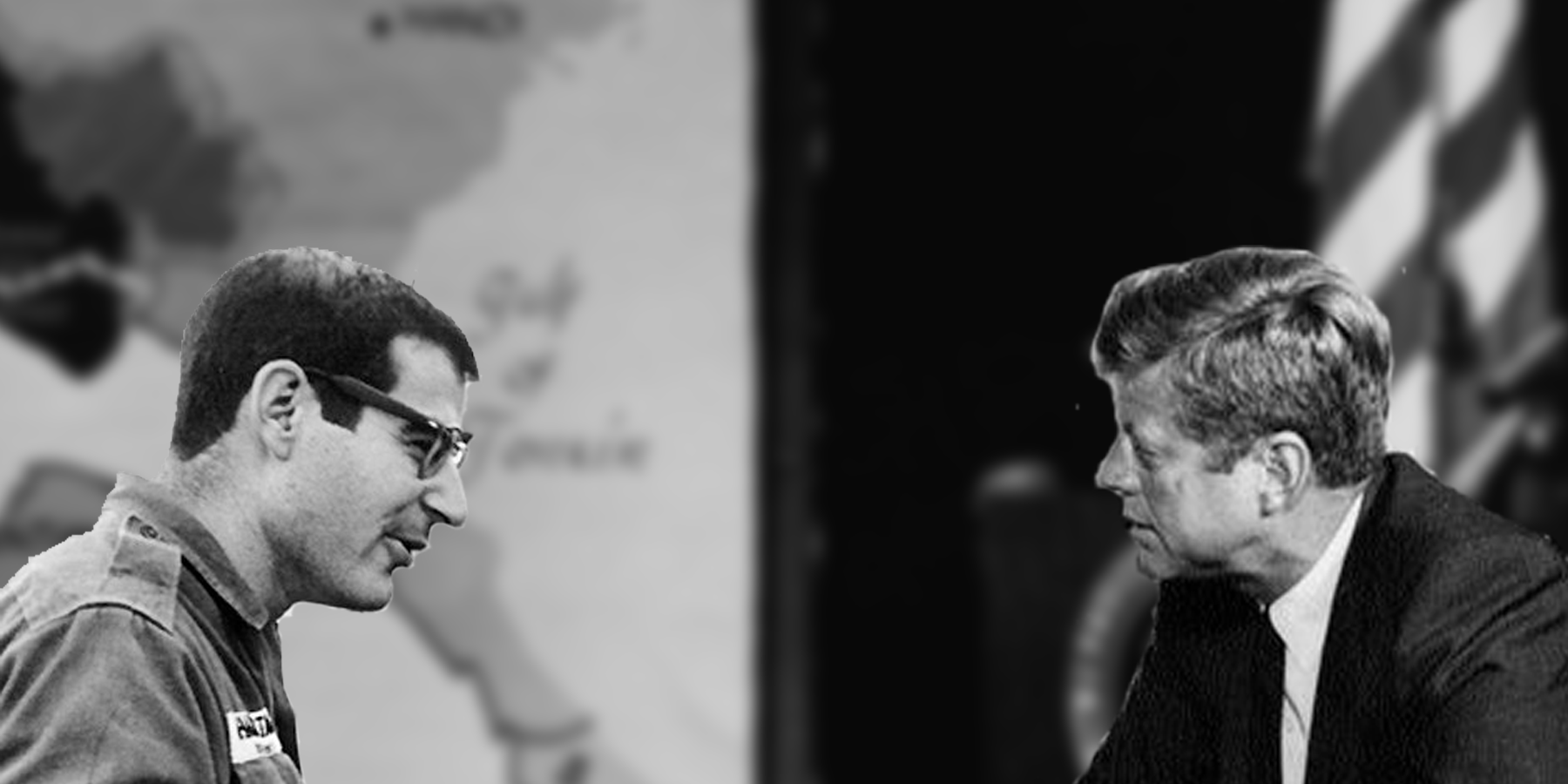 But after the meeting, the publisher and Scotty Reston told me that my transfer to Saigon was postponed indefinitely. The Times, they said, could not afford to bow to pressure from the president to change our news coverage to suit his policy. Two months later, after the Diem regime had been overthrown, the Times decided to pull Halberstam out of South Vietnam and I was in Honolulu, winging my way to Saigon on the day that President Kennedy was shot in Dallas.

Johnson and Pentagon Blast Salisbury as a Dupe of Hanoi

President Kennedy’s successor, Lyndon B. Johnson, intensified this adversarial strategy. He regularly railed against the press for what he and Defense Secretary Robert S. McNamara condemned as our biased news coverage that challenged the administration’s line that we were winning the Vietnam War, which Mr. Johnson had expanded with air attacks on North Vietnam. 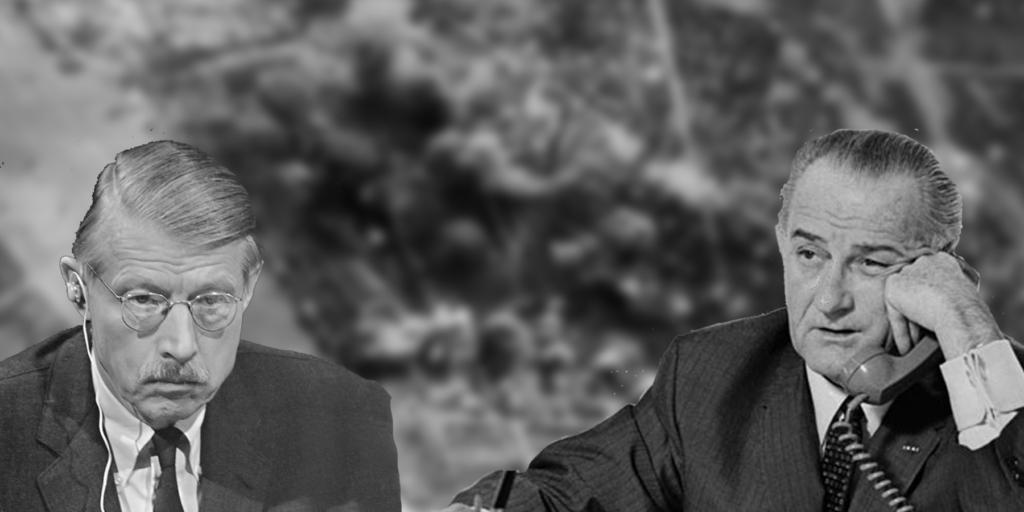 President Johnson clashed with the New York Times over coverage by Harrison Salisbury from Hanoi.

When in December 1966 the Times correspondent Harrison Salisbury went to Hanoi and began filing dispatches about the civilian casualties and destruction caused by the American bombing, the administration all but accused alisbury of treason.There was talk of trying him for “aiding the enemy.”

The Pentagon insisted that American attacks were carried out with pin-point precision, civilian casualties were extremely rare, and Salisbury had become a tool of Hanoi’s propaganda effort. But within weeks, Deputy Secretary of State Nicholas Katzenbach admitted privately to several of us reporters in Washington that American air raids were in fact hitting civilian-populated areas of Hanoi, Haiphong and other cities.

During the administration of the next president, Richard M. Nixon, charge and counter-charge against the media escalated still further. The Nixon White House even compiled a political “enemies list” including more than 50 “enemies” among the media. To combat inside leaks over war policy, the White House and F.B.I. Director J. Edgar Hoover ordered the wiretapping of four reporters, including me, and 14 high government officials. 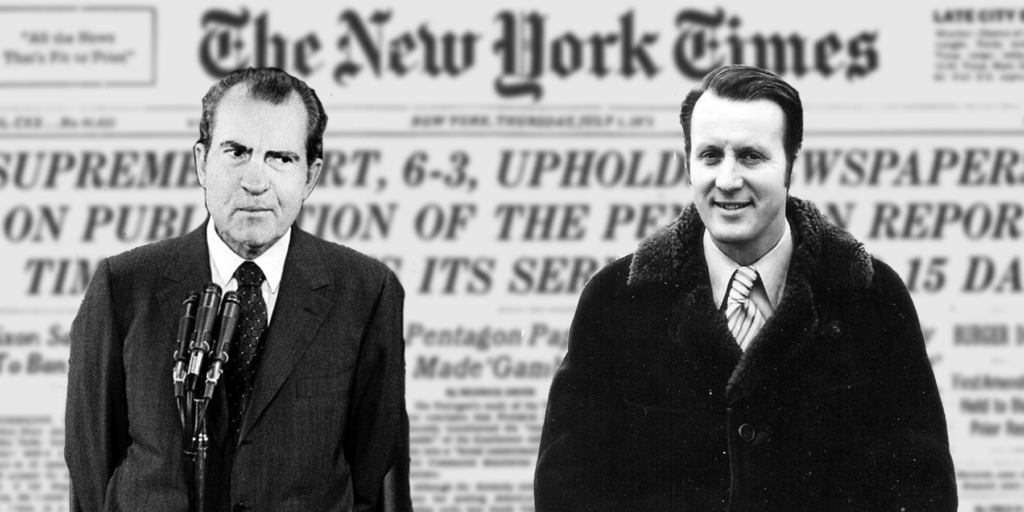 President Nixon ordered wiretaps of reporters like Hedrick Smith and tried unsuccessfully to block The New York Times from publishing stories about the Pentagon’s explosive secret history of the Vietnam War.

In 1971, my colleague Neil Sheehan obtained Secretary McNamara’s secret Pentagon history of the war, documenting the chronic deception of the American people by a succession of Democratic and Republican administrations. When The Times pusblished our stories as “The Pentagon Papers,” the Nixon administration went to court to stop publication. The Times was temporarily blocked but other papers picked up the story.

Infuriated, President Nixon insisted that someone “has to go to jail” for the leak. Secretary of State Henry Kissinger charged that publication of the government’s own documented history of the Vietnam War was destroying ”the credibility” of the United States government.

But very quickly, the Supreme Court ruled against government censorship of the media and in favor of the Times and we rolled out a book-length volume of stories and top secret government documents over the next 10 days that would forever alter and deepen our understanding of the Vietnam War.

Today, the issues are different, of course — questions about President Trump’s peculiarly warm and unexplained embrace of Russian leader Vladimir V. Putin and about Russian intelligence agencies meddling in the 2016 presidential elections on Trump’s behalf. But the clash of powerful institutions is similar. 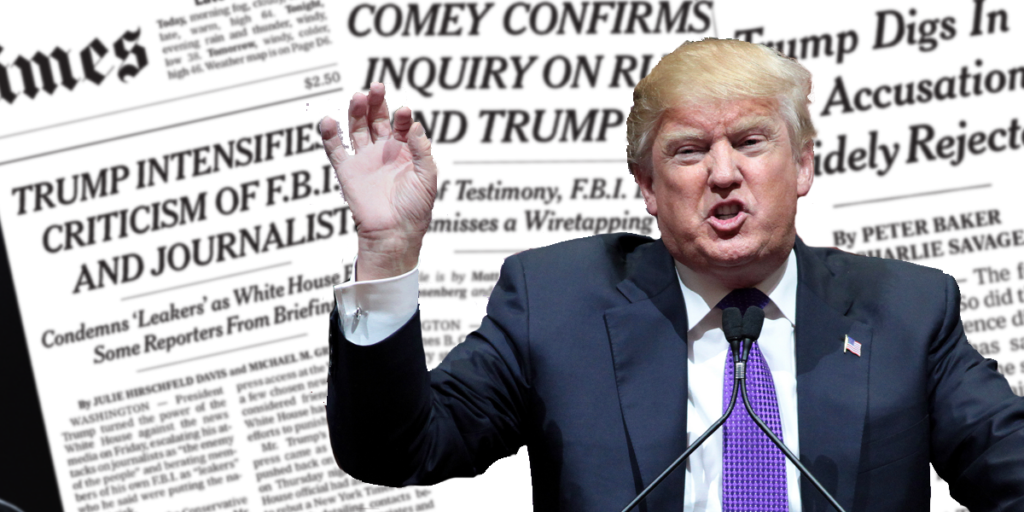 President Trump’s barrage against the media for publishing leaks from inside the F.B.I. and domestic intelligence agencies succeeded for a few days in diverting public attention away from his Russian connections. He and his White House Rasputin, Stephen K. Bannon, may also have reckoned that by savaging the press, they could intimidate Congress into softening its investigation into the Trump-Russia link.

But now the focus has swung back to the central question: What is President Trump hiding? If his campaign is innocent of illicit Russian connections, why not welcome the investigation and clear the air? If, as Trump said at his press conference last month, his former national security adviser, Michael Flynn, was simply “doing his job” in talking with the Russian Ambassador Sergei Kislyak about American sanctions against Moscow, why did General Flynn lie about it?

More broadly, why has President Trump side-stepped reporters’ questions about renewed fighting in the eastern Ukraine or the Russian deployment of a new missile in conflict with a 1987 arms agreement between President Reagan and Mikhail Gorbachev? Why, after publication of his 2005 tax returns, does Trump still refuse to release his most recent returns? Will they reveal something that makes him beholden to President Putin and Moscow?

History teaches that no matter how much the president tries to demonize the press, these and other crucial questions will not go away because today’s journalists are just as committed as those of us who covered past presidents to pursue them until we get answers that make sense and reveal the truth.