The Secret Behind Latest Democratic Losses

Washington – The key takeaway from the super-heated battle for Georgia’s 6th Congressional district, where Republican veteran Karen Handel beat Democratic neophyte Jon Ossoff, is that partisan gerrymandering is king. It swings elections more powerfully and reliably than a flood of MegaMoney.

Democrats and their supposedly “independent” Super-PACS turned this special election into the most expensive House race in U.S. political history. Flexing their financial muscle, Democrats poured a war chest of $39.2 million into the race, heavily outspending the still potent $24.8 million on the Republican side. But all that Democratic money went for naught. But why? 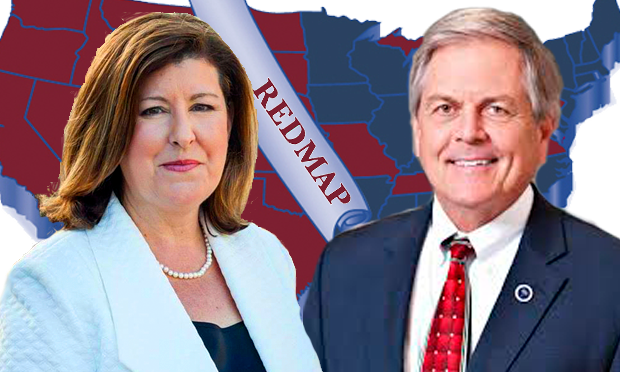 As they poked through the ashes of defeat, disgruntled Democrats blamed their previously youth-hero candidate, 30-year-old Jon Ossoff for too thin a resume or for not residing inside his election district. Or they sniped at late-breaking TV images of the shooting of Congressional Republicans by a Democratic malcontent. Or they carped that House Democratic leader Nancy Pelosi and her “San Francisco values” had undercut Ossoff in  among tradition-minded Georgia voters.

But the pundits forgot the fundamentals – that Georgia’s sixth district had been engineered by the Republican Party’s gerrymander map-makers in 2001 and again in 2011 to guarantee victory for Republican candidates and defeat for Democrats.

How Red Map Has Given Republicans “A Lock”

Amidst the finger-pointing and handwringing, political soothsayers ignored the obvious – that for four solid decades, Georgia’s sixth congressional district has been red, solid red, pure red, steadily red, loyally red, predictably red. In politics, that is called “a lock” – a safe political monopoly that has worked for the GOP in that district for 21 straight congressional elections.

That lock was most recently the bounty of RedMap, the GOP’s stunningly successful campaign to capture control of as many state governments as possible in the 2010 elections. By picking up 675 legislative seats nationwide in 2010, Republicans won vital leverage in the wake of the 2010 census, when congressional seats were reapportioned and election district lines had to be redrawn. 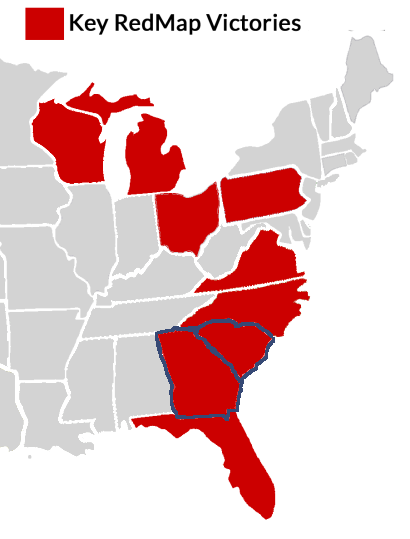 The RedMap sweep enabled Republicans to stack the mapping of election districts in the GOP’s favor in a string of states from Michigan, Ohio, Wisconsin and Pennsylvania to Virginia, Georgia, the Carolinas and Florida. Democrats did it, too in Maryland, Illinois and Massachusetts, but in far fewer states than Republicans.

RedMap has paid off handsomely. It helped Republicans gain control of the House of Representatives in 2012 with a 33-seat majority even though Democratic candidates won 1.5 million more votes nationwide than Republicans. “Republicans derive a net benefit of at least 16-17 congressional seats in the current Congress” from partisan gerrymandering, says a new study from the nonpartisan Brennan Institute at New York University law school.

RedMap – Firewall vs. The Democrats

What’s more, RedMap is the gift that keeps on giving. The sophisticated computer software used by the Republican mapmakers enabled the GOP to carve the boundaries of election districts with such precision that those GOP-drawn district maps now provide a firewall for Republican candidates in 2017 and beyond.

Not just in Georgia, where Handel beat Ossoff, but next door in South Carolina where Republican Ralph Norman defeated Democrat Archie Parnell, by 51% to 47% in that state’s fifth district. Go back a decade and Democrats used to win that district easily, because they had drawn the maps in 2001.

But when the 2010 census gave South Carolina one new House seat and the election maps were redrawn, the Republican legislature made sure that the fifth district was solidly Republican and and made it =easy for their man Mike Mulvaney to romp to victories in three elections. And last week, despite a strong challenge by Parnell, a pro-business Democrat with a Goldman Sachs pedigree, once again South Carolina’s fifth district worked like a charm as ”safe” Republican.

What Lured Democrats to Hope

In Georgia, Democrats were lured into discounting the political laws of gravity by two electoral anomalies. In 2016, President Trump had only narrowly carried that district and since then, Trump had gone so far off the rails that they were tempted to believe that the highly educated district voters would punish any Republican candidate for Trump’s political sins. And second, Ossoff took everyone by surprise by finishing first among a bipartisan field of 18 candidates in the first April primary with 48% of the vote. 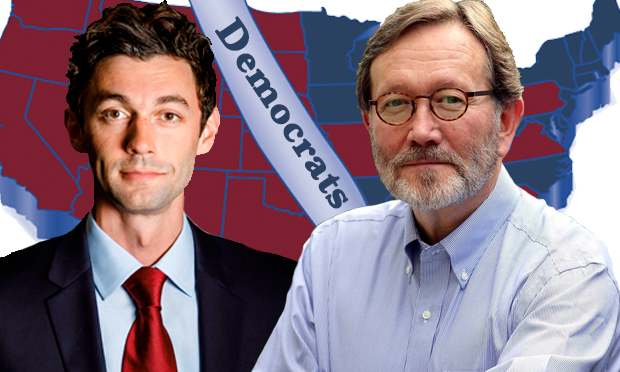 But in the runoff two months later, when both parties had time to mobilize their legions, turnout shot up from 193,000 to nearly 260,000. Ossoff was stuck at 48% of the vote. ”When turnout starts going up that high, and people start coming out of the woodwork to vote, it moves back to the (natural) alignment of the district,” commented Atlanta-based pollster Robert Cahaly.

Natural alignment in Georgia’s sixth district, as in many other states, means gerrymandered alignment – stacked the way the majority party drew election district maps, picking reliable majorities of their own voters to keep themselves in power.

The Historic pattern – Democratic for 134 years, Republican for 38

Gerrymandering has a long history in American politics, dating back to 1812 and Democratic Governor Eldridge Gerry of Massachusetts. In Georgia, The Atlanta Constitution reported recently, Democrats created a lock on the sixth district in 1844 and dominated it for 134 years, except for a brief period during post-Civil War Reconstruction.

But ever since 1978, when Newt Gingrich, then an upstart college professor, broke the Democratic lock by winning an open seat election, the Republicans have had their own monopoly in this district. Gingrich had one close-call election in 1990. But otherwise, he won a string of victories with majorities of 55% to 71%. In the last seven elections, former Rep. Tom Price always won with at least a 60% majority.

Against that big built-in Republican tilt in Georgia and South Carolina, Democrats Jon Ossoff and Archie Parnell did strikingly well, but had little chance of winning. Democrats, now headed toward the 2018 mid-term elections and beyond, will once again face a slew of tough uphill battles against built-in Republican gerrymander advantages in at least 100 congressional districts.

The partisan locks by both parties have triggered political rebellions among voters. In more than a dozen states, blatant party power politics have provoked grass roots reform movements seeking a more authentic choice for voters by turning over the job of drawing district lines to independent bipartisan commissions.