What about Your Oath of Office, Mr. Trump?

Washington – On January 21, 2017, Donald John Trump raised his right hand and, with just the hint of a smile of self-vindication, took an oath “to preserve, protect and defend the Constitution of the United States, so help me God.” 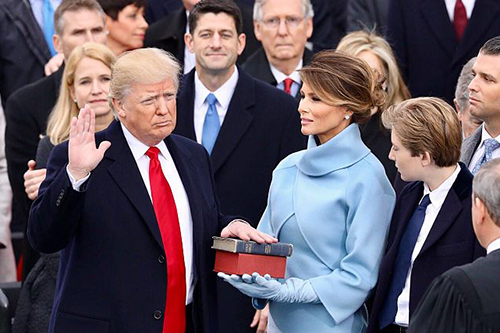 “We the People,” the Constitution begins, and its foundation stone is the right of the American people to elect our leaders through the free exercise of elections without the interference of any foreign power and without any candidate trying to influence the vote by paying bribes to suppress damaging information.

Yet in the homestretch of the 2016 election campaign, while Candidate Trump was demonizing his opponent as “Crooked Hillary,” Candidate Trump was flouting the integrity of U.S. elections and violating federal election laws. according to court testimony from his long-time attorney Michael Cohen, by instructing Cohen to pay $280,000 in hush money to keep two women from going public with potentially explosive stories about affairs they say that Trump had with them.

Last month in Helsinki, after meeting with Putin, Trump put as much trust in Putin’s denial of Russian meddling in the 2016 U.S. elections as he does in the finding of U.S.intelligence agencies. Asked about the conflicting versions, Trump told a news conference: “They think it’s Russia. I have President Putin — he just said it’s not Russia. I don’t see any reason why it would be.”

Met by a political firestorm, Trump tried to walk back that statement by claiming he misspoke and meant to insert a negative and say, “I don’t see any reason why it wouldn’t be” Russia. But that strains credulity, given how many times Trump has rejected the finding of American intelligence that Russian agencies intruded in the 2016 election on Trump’s behalf.

What’s more, during his 19 months as President, Trump has seemed to walk away from his constitutional oath by failing to show leadership to protect the 2018 mid-term elections from another round of political aggression by Russian hackers, trolls and internet bots hired, mobilized and targeted against our election system by the Kremlin’s intelligence agencies.

What’s more, the federal court papers implied that Trump himself had brought on the Russian hacking by highlighting the fact that Russia’s cyber-intrusions began hours after Trump,gearing up his presidential campaign, urged Moscow to hack Clinton. “Russia, if you’re listening,” Trump declared on July 27, 2016, “I hope you’re able to find the 30,000 emails that are missing,”

Last February, 13 other Russian agents were indicted by name by the grand jury working with Special Counsel Robert Mueller for interfering the US election via social media. But President Trump’s reaction on Twitter focused not on Russian electoral aggression but on claiming innocence for his campaign. “The Trump campaign did nothing wrong -no collusion!” Trump tweeted.

There was no quick reprisal by the President or his White House, even though his own national security adviser at that time, Lt. Gen. H.R. McMasters, asserted publicly that “with the FBI indictment, the evidence is now really incontrovertible” that the Russians had engaged in a “sophisticated form of espionage against the United States.”

Putin Sees No Price to Pay for Meddling in U.S.

“Frankly, the United States is under attack,” warned Dan Coats, a former Indiana Republican senator chosen by President Trump as Director of National Intelligence. “At a minimum,” Coats cautioned, “we expect Russia to continue using propaganda, social media, false-flag personas, sympathetic spokespeople, and other means of influence to try to exacerbate social and political fissures in the United States.”

Coats renewed his warnings against Russian electoral interference in 2018 once again in July, virtually on the eve of Trump’s meeting with Putin in Helsinki.

The nation’s intelligence chiefs all but say openly that they are looking for leadership and guidance from the President for them to organize concerted efforts to provide for the security and protect the sanctity of the mid-term congressional elections. But their testimony provokes no discernible response from President Trump. 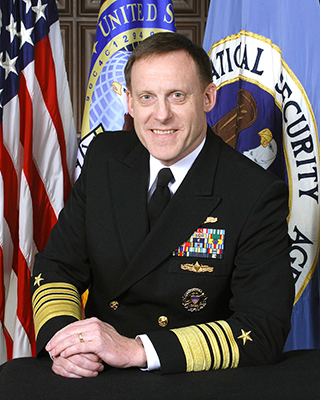 Admiral Michael Rogers, then head of the military’s Cyber Command and the National Security Agency, was explicit about the danger of Trump’s pussyfooting with Putin. Under questioning from the Senate Armed Services Committee, Rogers testified that Trump had not yet given orders for U.S. intelligence agencies to undertake strong enough cyber counter-measures to deter Russian intelligence agencies from interfering in the 2018 elections. In Rogers’s blunt assessment, “President Putin has clearly come to the conclusion that there’s little price to pay and that therefore ‘I can continue this activity.'”

Does Trump Fear Uttering a Sour Word vs. Putin?

Donald Trump’s kid gloves treatment of Putin and Russian intelligence leaves people asking whether there is some important and explosive truth in that notorious dossier compiled by former British spy Christopher Steele suggesting that the Russians do have some Kompromat – compromising material on Trump that he dares not trigger.

In a flash, the President can explode on Twitter in mockery or fury at British Prime Minister Teresa May, at American courts and judges, at Democratic Party leaders like Nancy Pelosi and Chuck Schumer, at Republican Senators like John McCain of Arizona, Bob Corker of Tennessee, or Senate Majority Leader Mitch McConnell, or at his much maligned Attorney General Jeff Sessions. But Trump acts as if his saying one sour word about Putin would be like stepping on a land-mine. 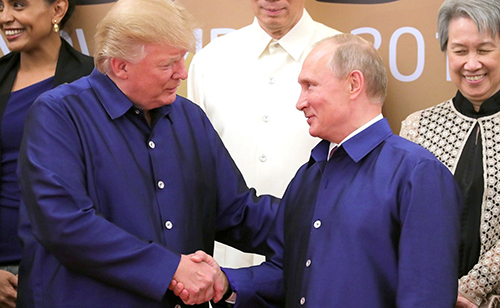 To Trump, of course, the issue of Russian meddling in the 2016 campaign strikes dangerously close to undermining the legitimacy of his election. Hence his reflexive dismissal of any investigation on that issue as “a witch hunt” or “a hoax.”

While his security and defense chiefs have identified Russia as a major threat to U.S. national security, Trump has shied away from taking the lead in U.S. action vs. Russia. For months, he defied Republicans in Congress by stalling the implementation of sanctions against the Russians for their meddling in the 2016 elections, even though those sanctions were mandated by overwhelming bipartisan majorities in Congress last summer.

When his Administration has tightened sanctions against Russia or expelled Russian intelligence agents, it is not Trump but his aides or cabinet secretaries or Congress that have forced action, with Trump being dragged along, often complaining.the Administration tiptoed into implementing a portion of the congressional sanction package against 19 Russian officials and five intelligence agencies, several of whom had already been sanctioned by the Obama administration.

On Capitol Hill, the bipartisan leadership of the Senate Intelligence Committee called months ago for President Trump to “clearly communicate to our adversaries that an attack on our election infrastructure is a hostile act and we will respond accordingly.”

Republican Chair Richard Burr of North Carolina and the Democratic Vice Chair, Mark Warner of Virginia, urged the Trump administration to work with state governments to institute paper ballots and protect state voter databases from foreign attack and hacking to prevent or mitigate the impact of a repeat of Russian intrusions in 2016 into the voting systems of 21 states. Not only did Trump fail to put this on his policy agenda, but Warner called his cozying up to Putin in Helsinki “outrageous.”

Inevitably, Donald Trump’s behavior has raised fundamental legal and constitutional questions: Did Trump as candidate criminally violate election laws? And once in office, has Trump as President failed to fulfill his oath to “preserve, protect and defend the Constitution”? And if in fact, Trump has failed to take the lead in protecting our 2018 elections from foreign intrusion, is that an impeachable offense?