Washington – As we head into the 2018 election, you’ll hear more and more analysts talking about voter turnout and its importance in the battle for control of Congress. Turnout is typically low in mid-term elections and low turnout normally helps Republicans and hurts Democrats.

What almost no one mentions is the fact that turnout can be depressed by strict voter photo ID laws enacted by 15 states. Republicans favor these laws, insisting that they are needed to prevent voter fraud, though election officials in their own states say they see little or no actual fraud. Democrats dismiss this as a bogus argument. They say restrictive voter ID laws are intended to suppress the vote and help keep Republicans in power.

For Democrats to take control of the House of Representatives next November, they need to gain 24 seats. Their most promising path to victory is through states like California, Illinois and New Jersey, which boost turnout by making voting easy and voter registration automatic. 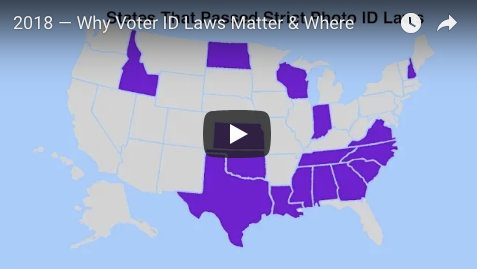 But in red states with tough voter photo ID laws like Georgia, Indiana, Kansas, Tennessee, Texas, and Virginia, the odds are tougher for Democrats. In those states, campaign experts rate a dozen or more seats held by Republicans as highly competitive, meaning that any obstacle to voting, such as a strict ID law, can tip the balance. Ditto for four competitive U.S. Senate races in Indiana, Tennessee, North Dakota and Texas.

North Dakota – Who Gets Hurt by Tough ID Laws?

If you’re skeptical that voter ID laws could have decisive impact, take a look at the normally solid red state of North Dakota. In 2012, Democrat Heidi Hietkamp won a surprising victory for the U.S. Senate, carrying the state by just under 3,000 votes, and the margin of victory was delivered by counties that have Native American tribal reservations.

The very next year, the Republican-controlled legislature enacted a restrictive voter ID law that seemed targeted against Native Americans. For voter registration, the law required a photo ID showing the applicant’s street address – a major obstacle for Native Americans because most tribal IDs lack a street address. On reservations, people generally list a P.O. Box. 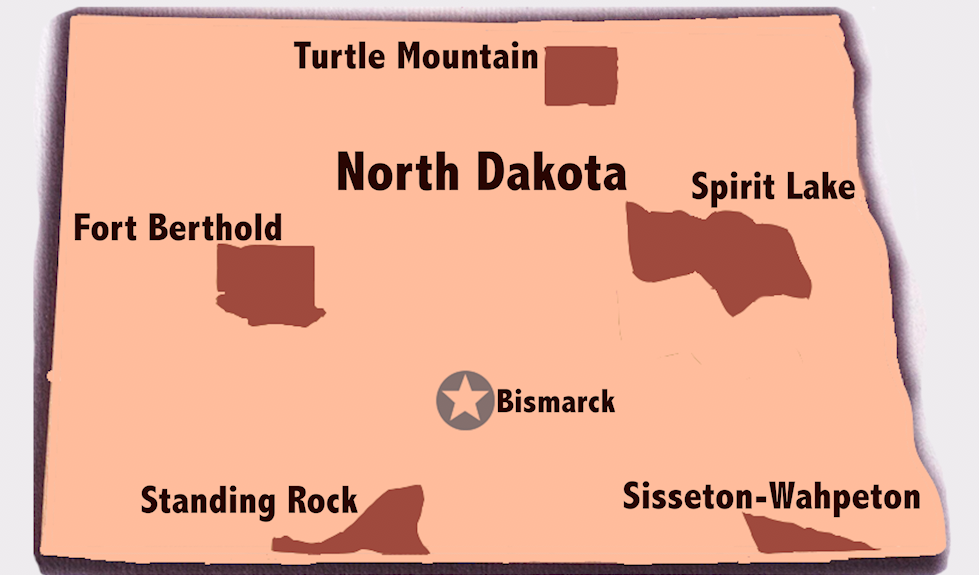 So Native American leaders protested. They went to court to fight provisions of the photo ID law and just this May they won a federal court ruling that threw out the requirement for street addresses. Good news for Heitkamp, who is running for re-election this year against a stiff challenge from three-term Republican Congressman Kevin Cramer. Aided by the court decision against the ID law, Heitkamp is back courting Native American voters once again.

Texas is the state where a tough voting law could have the wide impact. At least three Texas House seats held by Republicans are considered in danger from Democratic challengers – those held by Pete Sessions near Dallas, John Culberson near Houston, and Will Hurd, in the rural Rio Grande Valley. And there’s surprisingly strong challenge in the U.S. Senate race being mounted by Democrat Beto O’Rourke against incumbent Republican conservative Ted Cruz.

All three of the contested House districts have large minority populations. The Rio Grande Valley district is 75% minority; the Houston district- 53%, and the Dallas district – 47%. And minority voters, especially Hispanics, contend that they have been unfairly targeted by the Republican-backed photo ID law in 2011.

That law made voter registration contingent on possession of a few limited photo ID’s – a drivers’ license, military ID or a license to carry a concealed weapon, but not a government employee ID, student ID from a state university or a welfare program ID. So Hispanic voters went to court.

During court hearings, a federal judge estimated that the photo ID law had kept 600,000 minority residents off the voter rolls. Under court order to fix the law, the Texas legislature made a token concession, by allowing individual voters to swear under oath that they were unable to get the required IDs and instead submit paychecks, bank statements or utility bills as proof of identity. 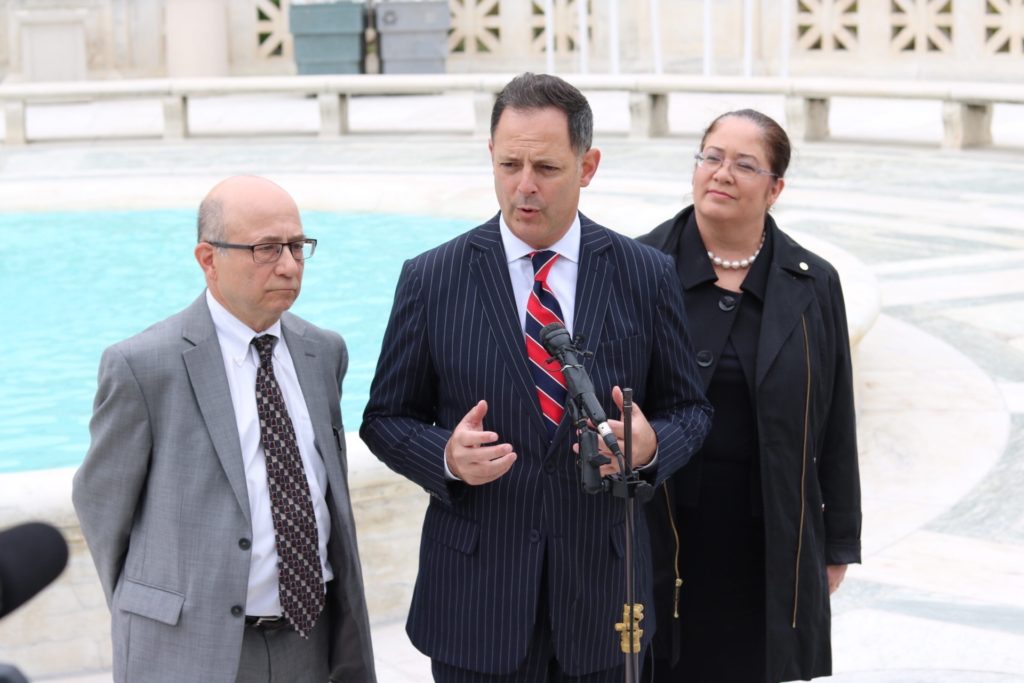 That satisfied the courts but did not satisfy leaders of the Mexican American Legislative Caucus who still fear that next fall, the brown and black vote in Texas will be suppressed and undercounted, hurting Democratic candidates. “Our view today is the same as it has been since the first day of this litigation,” says state Rep Rafael Anchia, chair of the Mexican-American Legislative Caucus. “The Texas voter ID law is discriminatory.”

In neighboring North Carolina, the Republican push for a strict photo ID law may backfire and wind up boosting Democratic chances. For not only was the restrictive photo ID law struck down by a federal court as unconstitutional, but its adoption galvanized a massive backlash among minority and progressive voters against Republicans. This year that mass protest movement has targeted two vulnerable Republican congressional seats, enhancing democratic chances for upset victories.

What Impact in Indiana and Tennessee?

When it comes to the battle for control of the U.S. Senate, Indiana and Tennessee are two states where tough ID laws could affect the outcome. Going into the election, Republicans hold a narrow 51-49 Senate majority. So Democrats need to gain two seats. But first they have to hold onto the seats they already have, and that’s tough because 24 Democratic senators are up for re-election, and already half a dozen Democrats are in tight races.

Perhaps the most vulnerable is Joe Donnelly of Indiana, an upset winner in 2012. This year Donnelly faces businessman Mike Braun, winner of a three-way GOP primary. So high are the stakes in this race, both sides expect at least $100 million will be spent on this race. And in that hothouse combat, anything that hurts the vote on the other side – like a tough voter ID law – is a plus for Republicans.

In Tennessee, a strict voting law may hamper a Democratic challenger. Former governor Phil Bredesen is trying to pick up the Republican senate seat left open by the retirement of two-term Republican Bob Corker. To beat his GOP rival, Trump loyalist and Congresswoman Marsha Blackburn, Bredesen has to buck a tough voter ID law and capture every conceivable Democratic and minority vote and then peel off some moderate, anti-Trump Republicans

West Virginia is the wild card in the political brawl for the Senate. Rarely do the two parties agree on anything, let alone voting laws, but that happened in West Virginia two years ago. In 2016, the Republican legislature and a Democratic governor adopted a bipartisan plan for voter photo ID with very flexible terms plus automatic voter registration when residents get their drivers’ licenses or have them renewed.

Since then, West Virginia has registered 53,000 new voters, and in theory that should help incumbent Democrat Joe Manchin in a tight race against Republican Attorney General Patrick Morrissey. But West Virginia is maverick and unpredictable. Registered Democrats outnumber Republicans 4-3, but in 2016 Trump won West Virginia by nearly 40-points. So take your pick.

But elsewhere, keep a sharp eye on how those voter ID laws are tilting the political odds.