Washington – Economists call it “the Virtuous Circle of Growth.” It’s the dead opposite of “trickle down economics.” The core idea is that a well-paid middle class is the engine of America’s economic growth. In other words, America’s job creators are the 99%, not the 1%.

That was the economic concept that powered America’s remarkable growth from the end of World War II to the late 1970s – the heyday of the American middle class, when average American families shared broadly in the growth and prosperity of the nation.

This month, the Virtuous Circle of Growth is back again, helping to inspire the Obama Administration’s decision to update the rules for time-and-a-half overtime pay and to engineer a pay raise for an estimated 12.5 million middle class Americans.

The new rules create opportunities for all kinds of employees to qualify for an average $1,000 more in annual pay — from back office staff to construction and forestry workers, from fast food shift managers to team leaders in hospitality and transportation, salaried employees who have been denied overtime pay by employers who classify them as “supervisors” or “managers” even though they only get rank-and-file pay. [see detailed chart below] 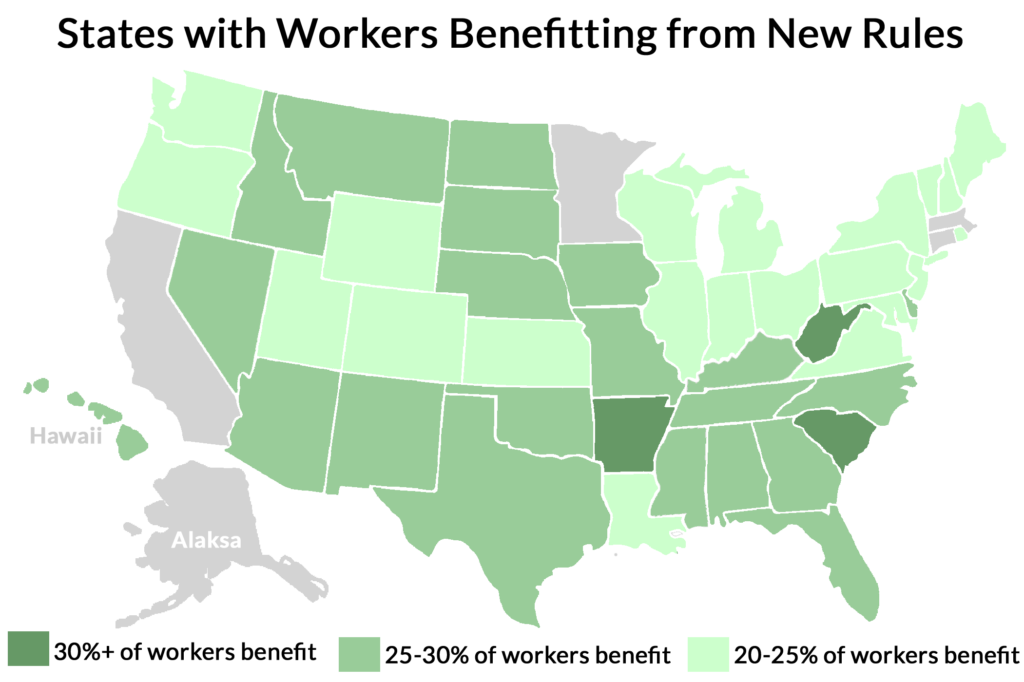 These rules with have nationwide impact, of course, but the states where the most people qualify for overtime pay increases under the new rules that take effect next December are some of those with struggling pay scales – Arkansas, West Virginia, South Carolina, Florida, Tennessee, Idaho and Georgia.

“Investing in the Middle Class… is Pro-Business”

Predictably, business owners, retailers, and conservative politicians and commentators quickly squawked that the new overtime regulations will cost business billions of dollars, put a crimp on job growth, and lead to layoffs. House Speaker Paul Ryan contended that the new rules would not only be “an absolute disaster for our economy” but would backfire by hurting the very workers they are supposed to help because businesses will cut back on their overtime hours.

In recent years, that kind of gloomy assessment of the impact of higher pay for Middle America has become a staple of corporate and conservative commentary. But it is being increasingly challenged by some economists and business leaders who discount “chicken little” forecasts as misguided trickle-down thinking.

READ How Marketbasket Workers and Customers Defeated the 1%

In effect, Hanauer was channeling the established corporate wisdom of an earlier era of American capitalism when the CEOs of General Motors, DuPont, General Electric, Standard Oil of New Jersey and most other big companies believed that sharing more of corporate wealth and profits with employees was smart business and smart economics. 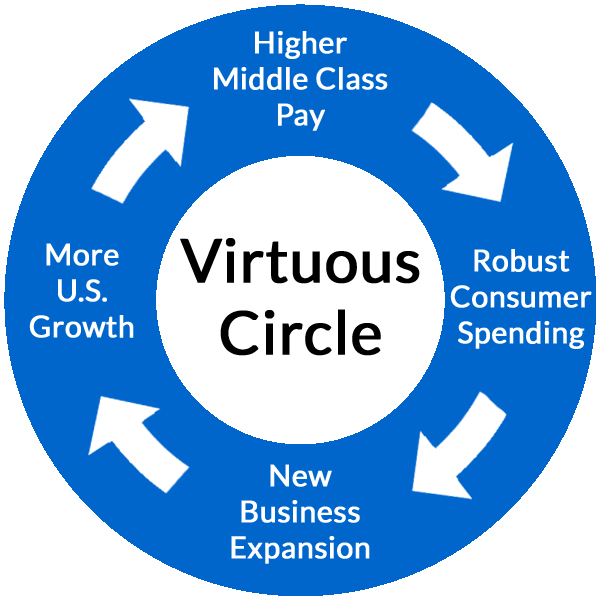 How “The Virtuous Circle of Growth” Works

Those CEOs were guided by the dynamics of the Virtuous Circle, convinced that paying good wages and salaries to tens of millions of middle class workers was the surest way to guarantee massive consumer spending and high demand for them products of American businesses were producing, thus powering economic expansion.

In other words, the corporate mindset in that era saw each step in the Virtuous Circle fueling the next and the whole process generating growth and corporate profits.  As Henry Ford once remarked, paying Ford Motor Co. workers the then unheard-of $5 a day meant that more Ford workers could afford to buy the Model T Cars rolling off Ford assembly lines. That is, higher middle class pay increases sales.

“The Middle Class Is Getting Clobbered”

Over the decades, this salaried workforce mushroomed. Many employers pushed salaried employees to do more and more overtime work, often to avoid hiring additional workers. In a 2014 Gallup poll, salaried employees reported working an average of 47 hours a week and 18% said they worked more than 60 hours.

But very few were paid for all those overtime hours because the legal protections for overtime pay were steadily eroded, as inflation boosted nominal salaries above the fixed legal threshold where overtime pay was required. By 2015, the number of salaried workers entitled to overtime pay had fallen from 62% in 1975 to just 7%.

Vice President Joe Biden decried this weakening of overtime protections. “The middle class is getting clobbered,” Biden declared. “If you work overtime, you should actually get paid for working overtime.”

A Step toward Reducing Income Inequality

While critics warn that the new overtime rules will cause layoffs and cutbacks in work-hours, advocates predict job growth. Facing a choice, they say, employers will either have to give overtime pay or cut back overtime hours and fill the gaps by hiring new workers at regular pay, reducing unemployment. Along with the Economic Policy Institute, a pro-labor Washington think tank, Goldman Sachs has forecast that new overtime rules would generate 120,000 new jobs.

That’s because CEO’s can bank their bonuses and Wall Street Investors can sit on gains, but average Americans spend almost every extra dollar they earn and those extra billions of consumer spending are a stimulus for economic growth, as well as reducing income inequality by just a notch or two. 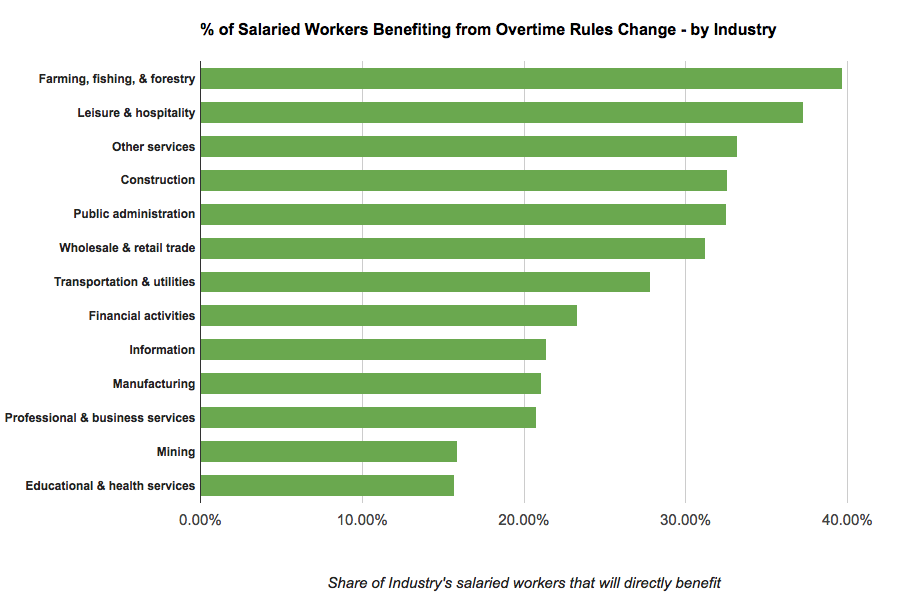