The People vs. the Politicians – Guess Who Wins?

Washington -If you suspect that politicians are rigging American elections to keep themselves In power, take a close look at Ohio. Or if you think gerrymandering doesn’t matter, check the track record this decade, which shows that Republicans have been gaining at least 16 and up to 22 extra seats in the House of Representatives every election, by cleverly manipulating election district maps.

Democrats do it, too, but Republicans are better at it and they do it in more states.

Ohio is a prime example of winning power by gaming election maps. And this year, Ohio has become a key target for grass roots reformers, who have just scored a tremendous victory at the ballot box to overturn partisan gerrymandering by the Ohio legislature, which has been run by Republicans. 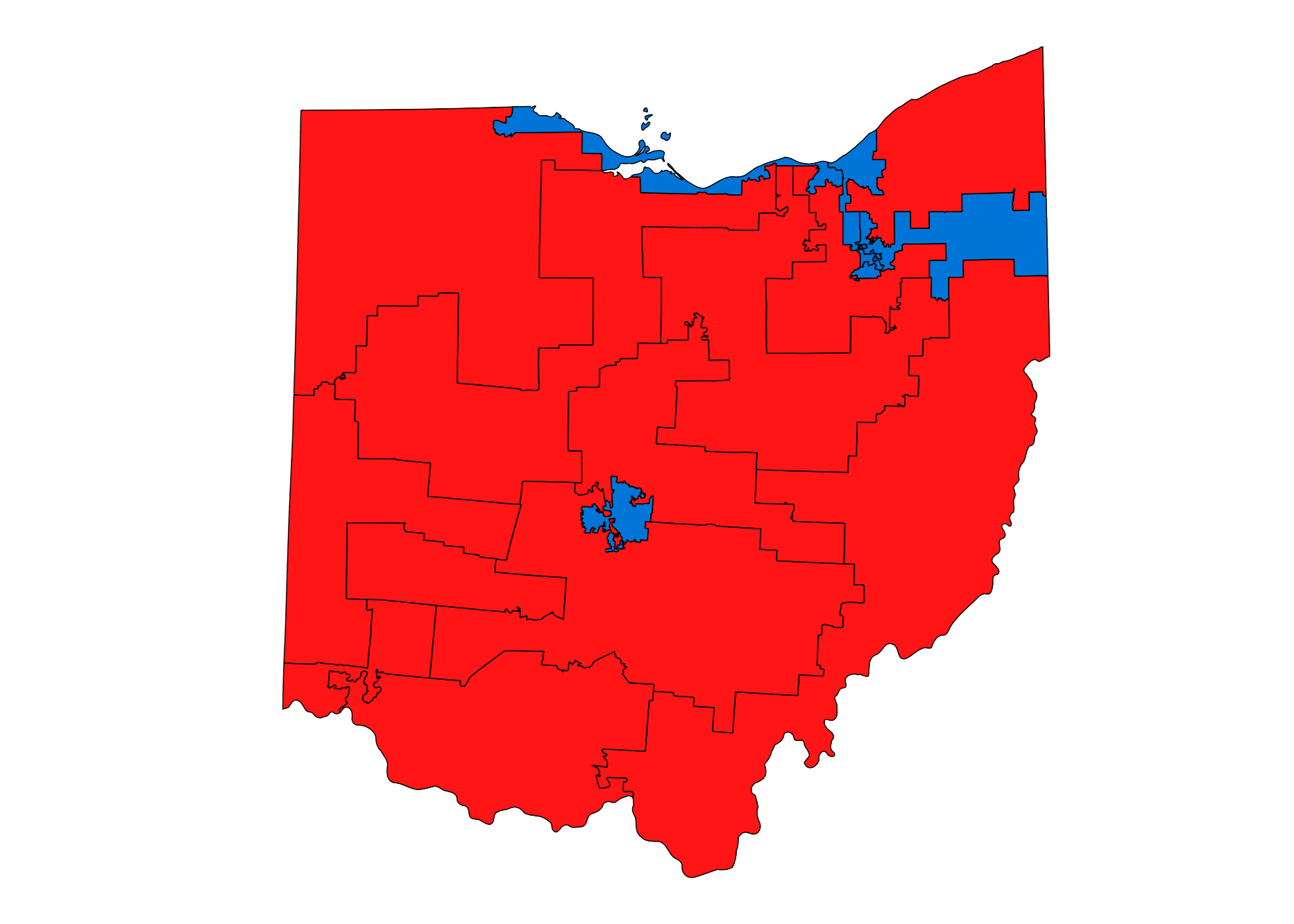 It’s The People vs the Politicians, and what’s surprising – and encouraging – is seeing how a grass roots citizens movement mobilized people power to put the heat on politicians and make them swallow and adopt a reform that will help fix our broken democracy, at least in Ohio, and make it fairer, more transparent and more representative.

What makes Ohio significant is that it’s a microcosm of America, a political bellwether. It is one of the nation’s pivotal swing states – always a battleground in presidential elections because it is so closely divided politically.

When it comes to the race for the White House, Ohio swings back and forth between Republicans and Democrats, from backing Bill Clinton to George W. Bush to Barack Obama to Donald Trump. Since 1964, Ohio has voted for the winner in every presidential election, regardless of party.

But when it comes to congressional elections, something goes haywire in Ohio. Republicans have an unshakable grip on power. In this decade, election after election, GOP candidates have consistently won 12 of Ohio’s 16 Congressional seats, leaving the Democrats with only four.

And that outcome doesn’t match the political affiliations of Ohio voters. The latest numbers show that in Ohio, 59% of registered voters are political independents. Only 25% are registered as Republicans and 16% as Democrats.

In theory, that should mean that most of Ohio’s congressional seats are highly competitive and up for grabs in each new election cycle. But they’re not Why? Because Republicans got a lock on power in the legislature with their self-styled RedMap strategy in 2010. In Ohio and a string of other key states, RedMap focused on Republicans’ capturing control of state legislatures so Republicans were the ones drawing congressional district boundaries after the 2010 census.

Democrats Slow to Wake Up 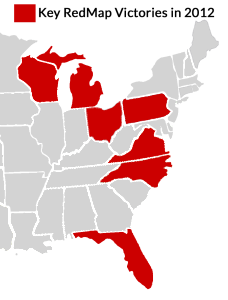 In Ohio – and a string of other states like Wisconsin, Michigan, Pennsylvania, Virginia, North Carolina and Florida, RedMap worked like magic for the GOP. By winning control of state governments, Republicans were able to manipulate district maps to give an edge to Republican candidates in House races in many states. They did it by packing Democratic voters into a limited number of urban districts and spreading Republican voters around to many more districts.

In 2012, election returns showed that Democratic candidates for the House of Representatives won 1.4 million more votes nationwide than Republicans, but Republicans wound up with a 33-seat House majority.

But with President Obama winning re-election to the White House, Democrats were slow to wake up to how badly they had been hurt by Republican gerrymandering. When experts began to quantify the GOP advantage, one study by scholars at New York University’s Brennan Institute reported that partisan bias in election district maps gave Republicans “a net benefit of at least 16-17 seats” in the House above their share of the popular vote. An Associated Press analysis calculated Republican gerrymandering a bonus of “as many as 22 additional U.S. House seats.”

Speeches from the Politicians; Backlash at the Grass Roots

Inevitably, there was a backlash in states like Florida, Pennsylvania, and this year in Ohio, Michigan, and Missouri, where there are grass roots drives to overturn partisan gerrymandering through popular referendums on gerrymander reform – having district maps drawn by an independent bipartisan commission instead of politicians in the legislature.

In Ohio, Republican Gov. John Kasich came out for reform. “Ideas and merits should be what wins elections, not gerrymandering,” Kasich declared in his 2016 state-of-the-state address to the Ohio legislature. “When pure politics is what drives these kinds of decisions, the result is polarization and division. I think we’ve had enough of that. Gerrymandering needs to be on the dust bin of history.”

Kasich won resounding applause, but neither he nor the legislature took concrete action. The impetus for change came from the League of Women Voters and Common Cause, leading a coalition for Fair Districts Ohio. In May 2017, they launched a grass roots petition drive calling for a popular vote in November 2018 on a ballot measure to set up independent bipartisan redistricting commission. 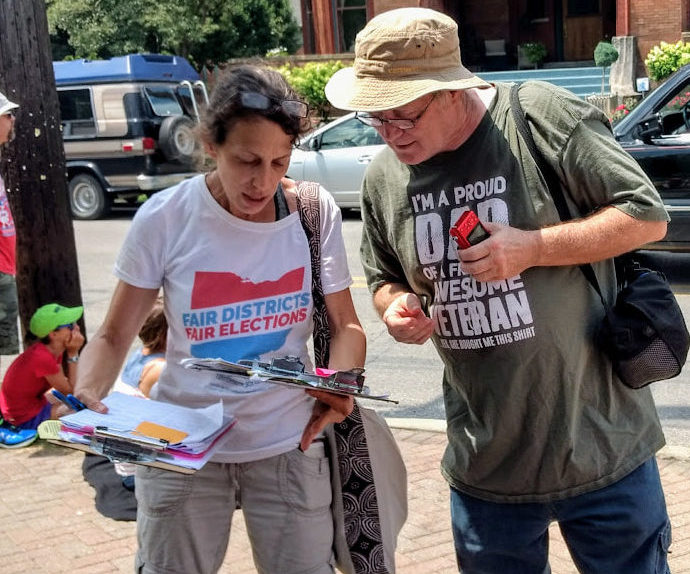 By the end of 2017, Fair Districts Ohio had collected 188,000 of the 306,000 needed signatures. That galvanized the legislature. Rather then be totally sidelined by citizen reformers, legislative leaders came up with their own reform plan.

The message, said Republican Senate President Larry Obhof, is: “Get along with your colleagues. Cooperate across party lines, and if you try to cram down a strictly partisan map, you aren’t going to be able to do it.”

That message of bipartisan compromise won endorsement from reform leaders and a whopping 3-1 majority vote among Ohioans in the state’s May 8 state primary. The overwhelming popular vote, asserted Common Cause National President Karen Hobert Flynn, “sent a clear message to politicians” that the voters want an end to rigging elections by gerrymandering. In Ohio, the new, more bipartisan system goes into effect in 2021, a testament to the power of citizen-driven reforms.