Washington – Maybe you’ve forgotten, as I had, how snidely candidate Donald Trump declared war on Wall Street back in 2016, savaging Hillary Clinton as ”the puppet” of Wall Street – “they pull the strings” – and personally vowing to generate an economic renaissance that would lift the American middle class out of stagnation and restore 7.7 million lost manufacturing jobs.

“I know Wall Street. I know the people on Wall Street.” Trump boasted to a small-town crowd in the Gothic farm country of Ottumwa, Iowa, in January 2016. “I’m not going to let Wall Street get away with murder. Wall Street has caused tremendous problems for us.”

A year later, at his Inaugural, Trump limned a glowing future for the anxious and disenchanted working class who helped put him in the White House. “We will bring back our wealth and bring back our dreams,” he promised. “We will build new roads and highways and bridges and airports and tunnels and railways all across our wonderful nation. We will get our people off of welfare and back to work rebuilding our country.” 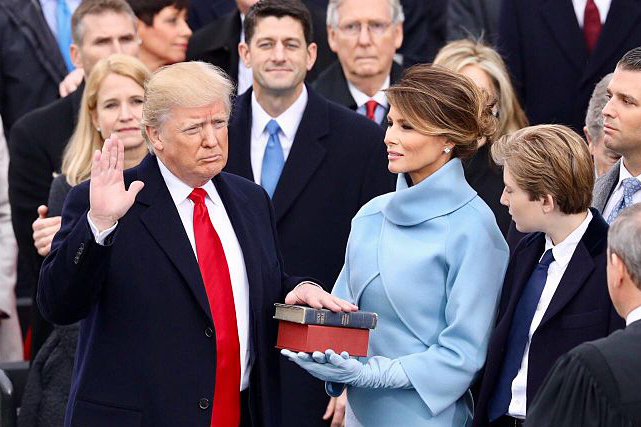 And what happened?  Bait and Switch. just the opposite of what he promised in Iowa. Remember  that massive Trump tax cut in late 2017. It was, in his words, “murder!” Trump handed a financial bonanza to Wall Street, Corporate America, and the financial elite, but he never made any serious effort to create all those middle-class jobs by investing significantly in rebuilding America’s aging, pothole-riddled infrastructure.

Now, once again, in the midst of the corona collapse, Wall Street and the top 1% are riding high reaping enormous profits, while the real economy and working-class Americans are stuck in protracted pain. What that means is that Trump has failed the true believers in Ottumwa, Iowa, and Fargo, North Dakota, and small-towns across Michigan, Pennsylvania, Wisconsin, Missouri, North Carolina, Ohio and beyond, who blindly bought  his staged taunts against Wall Street and his gossamer promises of a miraculous Trump-Utopia for Middle America.

663 promises – Which Ones Did Trump Keep?

In his presidential campaign of 2016, Donald Trump was a veritable Santa Claus – showering out promises to all kinds of voters – 663 promises in all, by one count. And in fact, he has kept faith with parts of his core constituency.

For the evangelical and ideological right, Trump delivered on his promise to alter the political balance of the federal courts, moving the U.S. Supreme Court firmly to the right by appointing conservative justices Neil Gorsuch and Brett Kavanaugh, and naming nearly another 200 like-minded federal judges.

For the MAGA, anti-global right, Trump carried out his condemnation of President Obama’s nuclear agreement with Iran and the Paris Climate Accord and, casting aside the advice of his own policy team, Trump walked out on both.

And for the frightened, xenophobic, ultra-nationalistic right, Trump ceaselessly slapped restrictions on immigration, separated families at the Mexican border, and sent them back to Central America. Despite opposition in Congress, he even managed to construct a few more barriers along the U.S. border with Mexico, though he never got Mexico to pay one peso toward the border wall, as he had promised.

It’s ironic, given Trump’s touting the economy as his ticket to re-election with his inflated hyperbole about creating “the greatest economy that we’ve had in our history,” that the economy is where Trump has most pitifully fallen short of his own promises.

On Jobs, Trump Misses His Own Marks

But beyond the macroeconomic numbers, what’s striking is how little Trump’s self-proclaimed wonder economy paid off in lasting gains for his political base, in farm country and blue-collar America.

For Trump, the hallmark of his economic strategy was the $1.5 trillion tax cut which he pushed through Congress in late 2017 and which has added to the nation’s deficit, despite his promises that it would pay for itself by generating more growth and taxes. Like a sun king of old, he held out its promise to individual Americans

Independent economists estimate that roughly two-thirds of Americans did get a tax cut, averaging close to $1,000, although close to 10 percent had to pay higher taxes. But Trump’s promised $4,000 bump in pay turned out to be what Trump calls “a hoax.” It never happened. What’s more, Most of Trump’s tax cut went to the top earners – 17% to the highest-earning 1%  and 60% of the total going to the upper 20%.

Running for office in 2016, Trump told Iowa he’d fight Wall Street and the elite. But once he got into the White House, he gave Wall Street’s favorite investors a cut in individual tax rates, lower capital gains rates, and lower corporate taxes, meaning lucrative payoffs for wealthy investors. With Trump’s help and blessing, Forbes magazine’s richest 400 American made $240 billion in 2019. the super rich 400 are now worth $3 2. trillion

That’s the bottom-line on Trump’s economic performance – a grossly unequal payoff to the top vs the middle. After the Trump tax cuts, former Federal Reserve board member, Princeton economist Alan Blinder, pointed to academic studies that show  “For the first time in the past hundred years, the working class today pays higher tax rates than billionaires.”

In short, Trump’s policies have more deeply embedded into our system the gaping inequalities that haunt almost every aspect of American society, politics as well as economics, and that not only reduce America’s long-term economic growth but breed growing mistrust of modern American capitalism and the fairness of the nation’s politics, especially among the younger generation.