Washington – History may not exactly repeat itself, but in five decades of reporting I’ve learned it does echo with familiar refrains.

Russia today, for example. It as if we’re back in the old USSR, once again witnessing the astounding spectacle of the solo dissenting voice of Aleksei Navalny, a 44-year-old activist defying the organized power of a modern police state and challenging the legitimacy of Russia’s new czar, Vladimir Putin.

To me, the Navalny scenario is eerily familiar. Like czars and commissars of old, the Putin apparat tricked Navalny by switching airports for the plane that flew him home from Germany, swallowed him in a swarm of police, stuffed him into prison, and staged a Stalin-style show trial on the bogus pretext that he skipped a probationary check-in on a previously trumped-up conviction. When wave upon wave of ordinary Russians took to the streets in Navalny’s defense across Russia’s eleven time zones, the regime sneeringly dismissed them as “hooligans and provocateurs” and slammed thousands into prison. 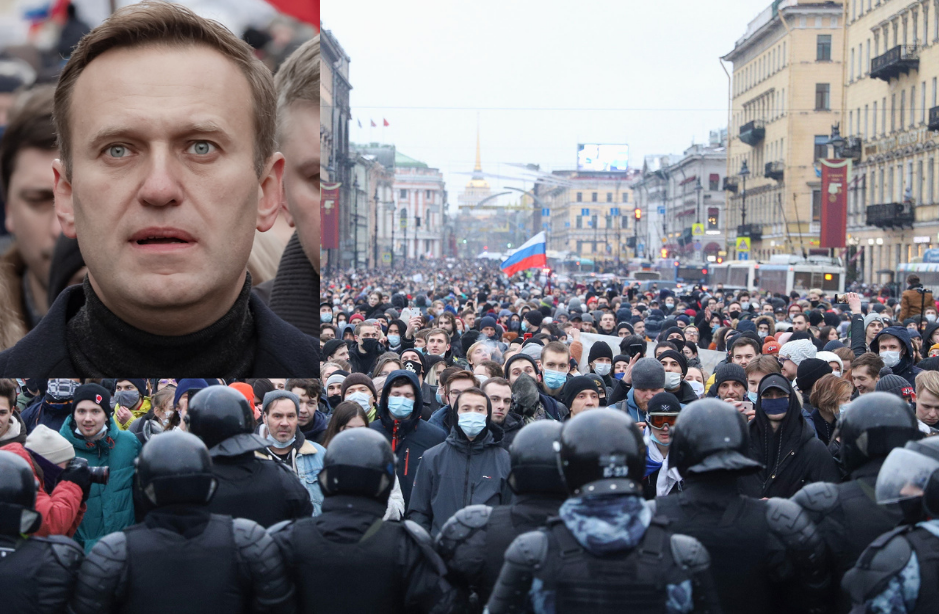 What is remarkable about the Navalny drama is not only his miraculous recovery from the regime’s attempt to assassinate him with the Soviet-era nerve agent novichok. But the astonishing influence of a single dissident, the animal fear of him betrayed by Putin & Co. and the surprising reach of Navalny’s appeal across Russia’s political spectrum among people united only in their hostility to what Russians call “the tough fist” rule of Putin’s 20 years in power.

For Poets and Authors – Siberia and a Firing Squad

To the Russian narod, the people, and especially to the intelligentsia who have longingly dreamed of democracy for a couple of centuries, it’s a sadly familiar story, an epic saga that replays in Russia, generation after generation. 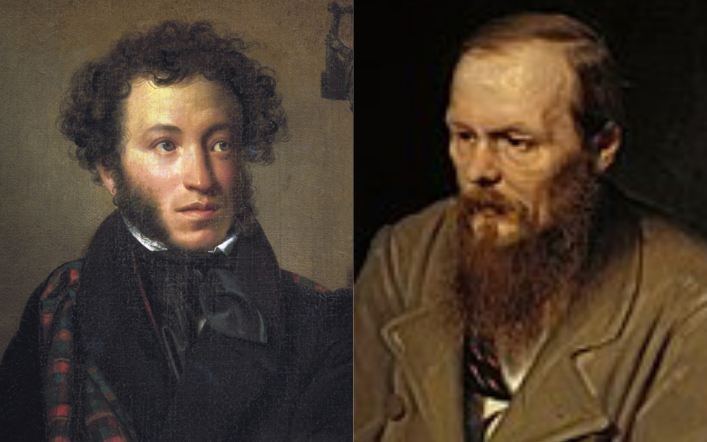 The celebrated poet, Aleksandr Pushkin was exiled by Czar Aleksandr I to Siberia in 1820, barely out of high school, for writing and reciting his poem, “Ode to Liberty.”  Three decades later, in 1849, the world-famous novelist Fyodor Dostoyevsky was sentenced to death for anti-government activities only to have his execution stayed by the czar as the firing squad was ready to take aim.

In 1937, the great modernist poet, Osip Mandelshtam was sent to an anonymous death in the frozen Siberian labor camps for writing a 16-line poem mocking Josef Stalin, the Communist dictator with his “cockroach” mustache, “thick worm” fingers, and executioner’s tongue.

As a correspondent for the New York Times in Moscow from 1971 to 1974, I witnessed this cycle of repression-and-rebellion first-hand with Nobel Prize-winning author Aleksandr Solzhenitsyn and his grim portrayals of the Soviet Gulag (Russian acronym for the labor camp administration), and with Andrei Sakharov, a decorated physicist who became reviled and exiled by the Communist regime and then restored and revered during Mikhail Gorbachev’s perestroika. 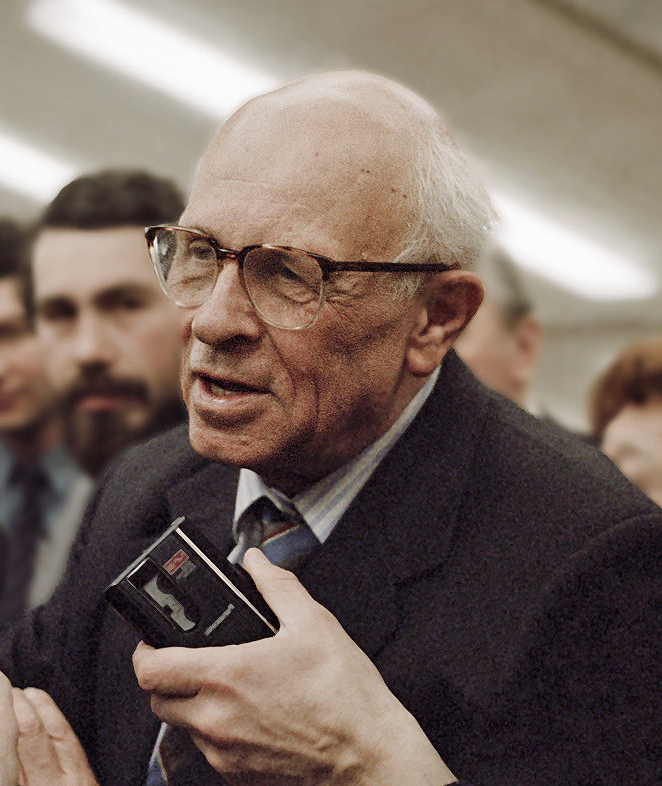 Sakharov was a strangely mild-mannered advocate of free speech and civil disobedience, tall, quiet-spoken, cerebral, idealistic. Outside one courtroom after another, we foreign correspondents would find him standing vigil at some dissident’s trial. decrying the injustice of Kremlin repressions. The Communist Party could hardly dismiss him as a nefarious CIA agent since Sakharov had been one of the scientific fathers of the Soviet-H-bomb.

Even so, visiting Sakharov at his apartment, listening to his high-minded appeals and watching him sip tea out of saucer perched on the tips of his long pianist’s fingers, I couldn’t help wondering how this seemingly fragile, sensitive soul mustered the courage to challenge the whole Soviet system. Initially, he was given some latitude because of his past service. But over time, the communist bosses and the KGB chafed over his relentless critiques and excommunicated him to the closed city of Gorky.

Aleksandr Solzhenitsyn – Inside the Gulag

Solzhenitsyn was different. He was a ruddy, bearded, jut-jawed, barrel-chested brawler, who relished taking on the regime. He knew the Gulag from the inside. He had been sentenced to Soviet labor camps for sounding off against Stalin while serving in the Red Army. In the mid-1960s, when Soviet leader Nikita Khrushchev denounced Stalin and Stalinism, Solzhenitsyn was among millions who were politically rehabilitated and he was permitted to publish his searing accounts of life and death in the Gulag.

But Khrushchev’s successors changed course and cracked down on Solzhenitsyn, branding him an ideological heretic. By the time I got to Moscow in 1971, he lived in isolation, rarely venturing into public. He was politically radioactive. Even so, I did manage to connect with him a couple of times. 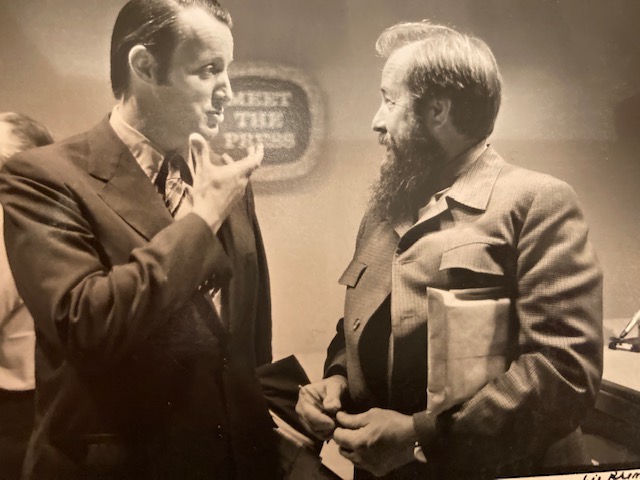 Correspondent Hedrick Smith with Solzhenitsyn in New York in 1975, after both had left the Soviet Union.

The last time I met with Solzhenitsyn in Moscow was the day before his arrest in February 1974. Like a Russian autocrat, he had phoned to summon me to his apartment where he wanted to give me an excerpt from The Gulag Archipelago, his encyclopedic pathology of the Soviet labor camp system. This was Solzhenitsyn’s way of alerting the West to his new work. Knowing that his actions would infuriate the Kremlin and anticipating imminent arrest, Solzhenitsyn had already packed his little bag of essentials for the Gulag, which I saw in the hall.

Approaching his apartment #169 at 12 Gorky Street, I noticed heavy surveillance – several parked cars, bristling with burly plainclothes goons. Walking among them felt like swimming through jellyfish in August. Once we were inside, the BBC’s Erik de Mauny, one of two correspondent friends whom I had brought along, wanted to record Solzhenitsyn reading his essay, titled “There Is No Law in the USSR today.”

Since I assumed Solzhenitsyn’s apartment was bugged, I expected the KGB to come crashing through the door and arrest us all while Solzhenitsyn was reading. Instead, they let us finish and leave that day. Then seven KGB agents came crashing through the door the next morning and carted Solzhenitsyn off the jail. The Soviet media reported he was being held incommunicado and charged under Article 58 of the old Stalin constitution for disseminating treasonous anti-Soviet propaganda.

I had filed my story to the Times, relaying his Gulag excerpt. Presuming that story to be prima facie evidence of an Article 58 crime, I expected to be arrested the following day as an accomplice to Solzhenitsyn. I have to admit I was sweating it out. I waited one day. I I waited two days.  Then the Kremlin surprised the world by deciding suddenly to exile Solzhenitsyn and deport him  – not to the Siberian Gulag but to West Germany. The Kremlin de3idee to get rid of its Solzhenitsyn problem once and for all. I breathed a sigh of relief. He was a free man and so was I.

Navalny and His New Generation of Protesters

The new wrinkle in Navalny’s story that magnifies his power and influence is, of course, the Internet. Unlike earlier dissidents who relied on hand-to-hand passing of forbidden protests, Navalny’s team can fan the flames of popular support by disseminating Navalny’s charges that Putin is so corrupt that he has built himself a $1 billion castle in the Crimea, a video seen more than 100 million times  on YouTube – “Navalny Live.” Or they can go viral with Navalany’s final speech in court denouncing Putin as “Vladimir, the Poisoner of Underpants,” where he said Kremlin agents planted the Novichok poison on him. 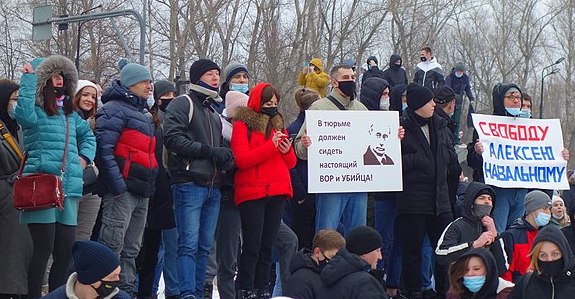 Young people play a big role in the Navalny demonstrations

A whole new generation of protesters has been electrified and mobilized not only by Navalny’s relentless anti-corruption campaign against Putin but also by the undaunted courage of his back-from-the-dead defiance despite the overwhelming odds against him. The potential for ongoing protests against Putin, even with Nalvany sentenced to 2 ½ years in prison, was underscored this past weekend, when tens of thousands of people turned out in city after city, many in their twenties and thirties and large numbers bitterly outspoken in condemning Putin.

Roughly 40 percent were first-time participants in mass protests in Russia, according to two snap surveys by Russian social scientists. “Navalny has, for the first time, sparked a Russian protest movement against the president,” Moscow sociologist Konstantin Gaaze told a New York Times correspondent. “It is an historic moment for the country.”

Global press coverage has magnified the impact. But the fierce police repression has also raised alarms that Putin, who voiced a visceral fear of mass uprisings when as a KGB major in Dresden he saw the communist regime fall to mass protests in East Germany in 1989, might in desperation turn to even harsher Stalinist repressions. “The bolts are tightening,” worried Nikolai Babikov, a 31-year-old computer systems analyst. “Freedom is being eliminated, and bit by bit we are becoming the Soviet Union again.”