Washington – Believe it or not, politicians are as fed up with and angry at the runaway campaign money race as voters.

It’s almost impossible to get Republican and Democratic politicians to agree on anything these days. But when they’re being honest and they’ve stopped running for office, they see eye-to-eye on one thing: They hate the never-ending money chase, how it degrades them as individuals and how it blocks them collectively from doing the people’s business. 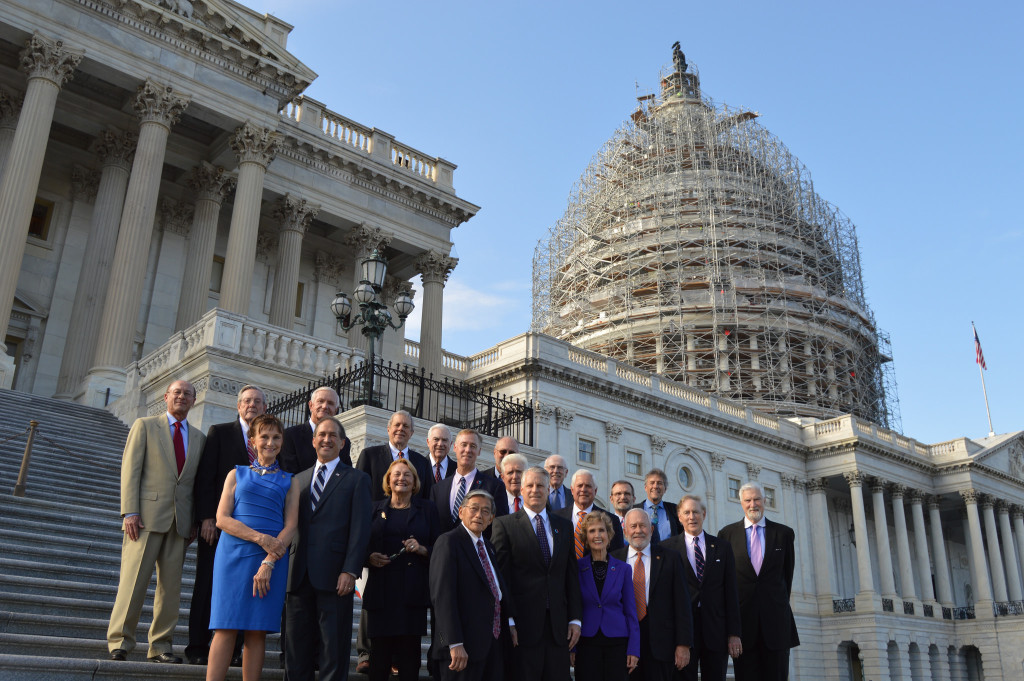 Some of the ReFormers’ Caucus members (by IssueOne)

If you’re skeptical, consider this: In a refreshing burst of candor and rare bipartisan agreement, more than 100 former Senators, Governors and members of Congress from both parties have joined forces and come out publicly attacking the corrosive influence political money and calling for campaign finance reforms.

The money chase is “a cancer” in our democracy that we must collectively cut out, declares three-term conservative Wyoming Republican Senator Alan Simpson. “It is disgusting,” Simpson snorts, to see presidential candidates crawling on their knees begging for money from billionaires.

There’s a direct correlation between the gridlocked, dysfunctional Congress and the runaway hunt for MegaMoney, declares former Senate Majority Leader Tom Daschle, a South Dakota Democrat. Members of Congress are so consumed by the grind of spending four or five hours raising money every single day, that they literally don’t have enough time to govern, explains Daschle.

“They go home on Thursday and come back on Tuesday and we try to govern on Wednesday,” Daschle notes. As Majority leader, Daschle says he was constantly being pressed “to arrange the Senate schedule not to conflict with fund-raisers.”

Worse, adds Bill Brock, former Tennessee Senator, Republican National Chairman and member of President Reagan’s cabinet, is that public trust in government has been eroded by the power of Megadonors. When polls show that two-thirds of Americans think members of Congress listen only to their big donors, says Brock, that “calls into question the trust, the faith, the hope of the people in their government.” 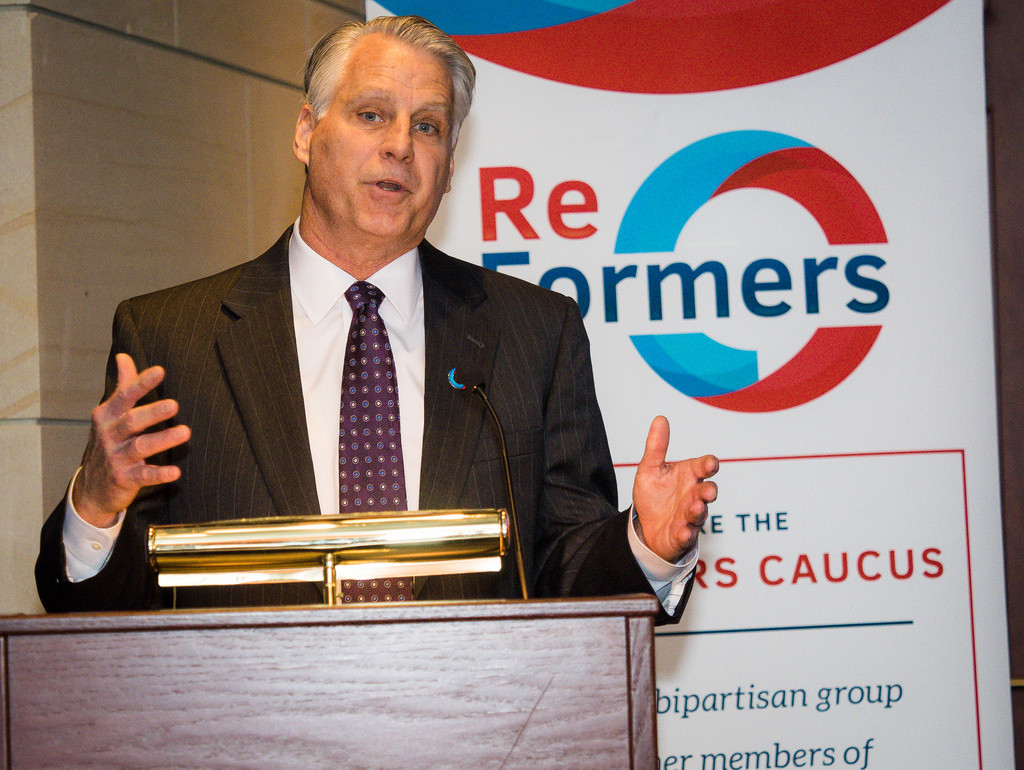 “Money in Politics is strangling and suffocating our democracy,” proclaims six-term Indiana Democrat Tim Roemer. “We are committing suicide. We see the threat of ISIS overseas. But we face another theat. The influence of money is destroying us from the inside.”

In all, nearly 140 former high office holders from 43 states have banded together in a new ReFormers’ Caucus under the umbrella of Issue One, a nonprofit foundation committed to political reforms. “We Can Fix This,” the caucus declared in a full-page ad in The Washington Post on November 5. “America’s political system is broken….We deserve solutions now.…That’s why we are coming together – Republicans and Democrats – to renew the promise of self-governance.”

The ReFormers’ Caucus began to coalesce about a year ago with just half a dozen former members. But with the campaign money race soaring to new heights in the 2016 campaign Roemer, the group’s chairman, says “this issue has exploded with energy in the past six months.”

Among those endorsing the ReFormers’ Caucus ad were 29 Republicans and 82 Democrats including a star-studded list of former Republican governors – Tom Kean and Christine Todd Whitman of New Jersey, Mike Castle of Delaware and Jon Huntsman of Utah – and former Republican Defense Secretaries William Cohen of Maine and Chuck Hagel of Nebraska.

Among the Democratic ex-governors are John Corlin of Kansas, Phil Hoff of Vermont, Jim Hunt of North Carolina, Richard Lamm and Bill Ritter of Colorado, and Bob Wise of West Virginia. 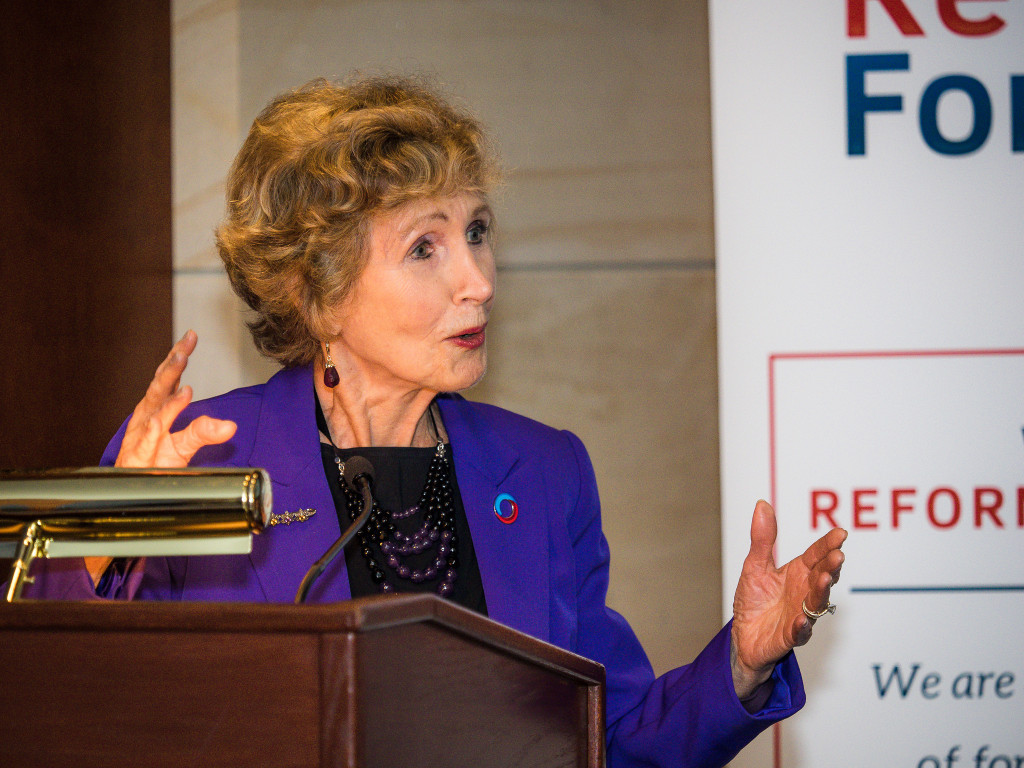 The group has not yet issued a collective call for action, but they have generally agreed upon five avenues of reform, according to Roemer and former Republican Congresswoman Connie Morella of Maryland. The five-pronged strategy includes:

“We have the solutions. Let’s get to work,” the ReFormers’ Caucus declared. And they intend to help mobilize grass roots civic action for political reform with a campaign of speeches, blogs, opeds, and, next year, a collective call to action. It will be fascinating to see whether these insiders have more leverage than the rest of us with their former colleagues on Capitol Hill. But the battle has begun.

Learn More About Amending the Constitution