Inside The Tax-Cut = Job Growth Myth

Washington – Riding a tide of tax cuts and rising profits over four decades, the captains of Corporate America have shifted $1 trillion each year from the paychecks of middle class Americans into massive payoffs to Wall Street investors and CEO pay packages. And now they want you to believe, once again, that cutting corporate taxes will benefit average workers.

Measured against the historical record, that’s a hollow claim that borders on economic fake news. Factually, it flies in the face of the actual performance of American business, which over the past 40 years has generated what Citibank once called the greatest inequality of income in any major nation since 16th century Spain.

In 2012, the Congressional Research Service published a report that bluntly debunked the pet conservative notion that lowering tax rates boosts economic growth. “The reduction in the top tax rates appears to be uncorrelated with saving, investment and productivity growth,” the congressional tax report concluded. Instead, it said, lower tax rates fuel economic inequality.

More recently, the rationale for President Trump’s tax-cut plan was shot down by a survey of business leaders who were asked by an international accounting firm how they would use tax savings. Most U.S. multinationals told the survey that they had no intention of investing windfall gains from tax cuts on growth, more jobs or higher wages. Only 23% said they would do that. The large majority said they would pass on their tax savings to investors through higher dividends and stock buybacks.

But none of that evidence has deterred President Trump, the pro-business Republican tax-writing committees in Congress and corporate CEOs from continuing to market the myth that there’s a pot of gold for the working middle class at the end of the tax-cut rainbow. 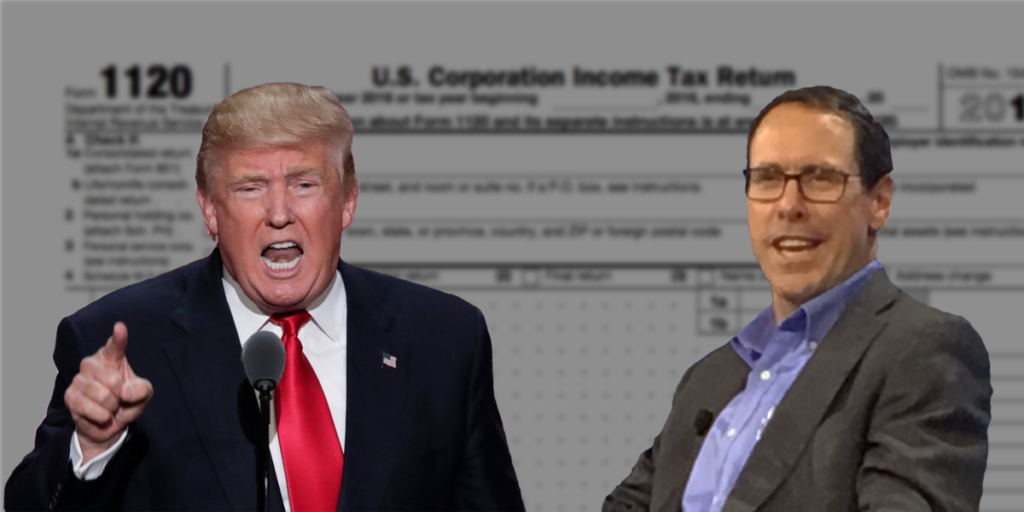 President Trump and AT&T CEO Randall Stephenson (right) say corporate tax cuts will boost jobs and growth, but even with a low tax rate AT&T has laid off 80,000 workers.

This fall, the president, who stands to benefit personally from business tax cuts, cast the whole idea in populist rhetoric to crowds in Missouri and North Dakota. “This is our once-in-a-generation opportunity to deliver real tax reform for everyday hard-working Americans,” Trump told Middle America. “Lower taxes on American business means higher wages for American workers.”

Sounds good but there’s a Catch-22. Sarah Anderson of the Institute of Policy Studies, a Washington research think tank, found that from 2008 to 2015, AT&T had already wedged its tax rate way down to 8% by taking advantage of tax write-offs and loopholes. But instead of using those low, low taxes to add jobs, AT&T has cut 80,000 jobs over the past nine years while CEO Stephenson was cashing in $124 million in stock options and grants.

AT&T is fairly typical. Thanks to $1.2 trillion in tax loopholes and deductions every year, most major American companies, especially those with global reach, pay much less than the official 35% corporate income tax rate. So much less that more than 100 big corporations have had years when they paid no federal taxes at all – Zero, according to tax records examined by Citizens for Tax Justice, a progressive think tank.

Based on corporate tax returns for 2008 to 2012, the group found 26 companies,  including Boeing, General Electric and Verizon, that actually got multi-billion tax rebates from the federal government, despite combined pre-tax profits of $170 billion.

Even worse for working Americans, those low, low tax rates didn‘t generate more jobs and higher wages. Just the opposite. The Institute for Policy Studies found 48 major U.S. companies that not only enjoyed tax rates below 20% from 2008 to 2015 but, like AT&T, they collectively cut a total of 483,000 jobs, despite what the Trump tax-cut lobby would have you believe.

These recent cases all fit a historic trend among hundreds of major U.S. corporations documented in detail by economist William Lazonick in Harvard Business Review in 2014. Lazonick’s article, tellingly titled “Profits Without Prosperity,” describes a major cause of America’s slow-growth economy today and suggests why so many economists doubt that corporate tax cuts will spur sustained growth.

Lazonick’s stunning disclosure was that in the late 1970s, major American companies used to reinvest about half of their annual profits in expanding their businesses, funding R&D, retraining workers and paying them more, and paid out the other half of profits to shareholders. But that pattern has changed dramatically.  From 2003 to 2012, Lazonick found, 91% of profits of S&P 500 corporations went to Wall Street investors and shareholders but only 9% of profits were allocated to growth.

That radical shift in corporate policies resulted not only in slower growth but in the steady erosion of labor’s share of national income (see chart below) and the explosion of economic inequality in America.  Billionaire investor and social critic Nick Hanauer of Seattle, recently put his finger on the key numbers: 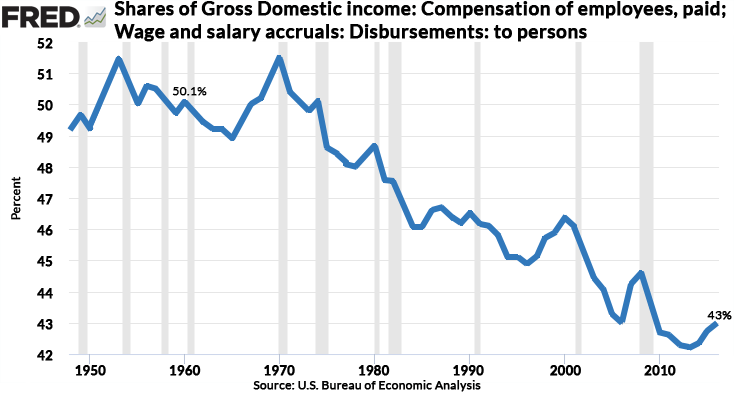 Anxious to reverse that massive income gap, Barack Obama as President advocated a lower tax rate for $2.6 trillion in corporate profits stashed overseas, provided that U.S. corporations were required by law to invest a large portion of those repatriated profits in job-producing projects to modernize America’s aging transportation network.  Obama felt it would take the force of law to make corporations invest in jobs.

But Republicans refused to work with him on that. And so far there is no evidence that either the Trump Administration or Congressional Republican leaders are ready to put teeth into their tax reform proposals to force Corporate America to live up to its gossamer promises of more jobs and higher wages.