Washington – For Candidate Donald Trump, one sure-fire way to ignite his political base in 2016 was to savage Wall Street for stealing the American Dream from the working middle class and to accuse Hillary Clinton of rigging the system for her friends at Goldman Sachs and other Wall Street banks.

“She is their puppet and they pull the strings,” Trump told cheering delegates at the Republican National Convention last July.

Now,  this self-proclaimed populist “Voice” of the people has flip-flopped 180 degrees and forged an alliance with Wall Street’s leading bankers. 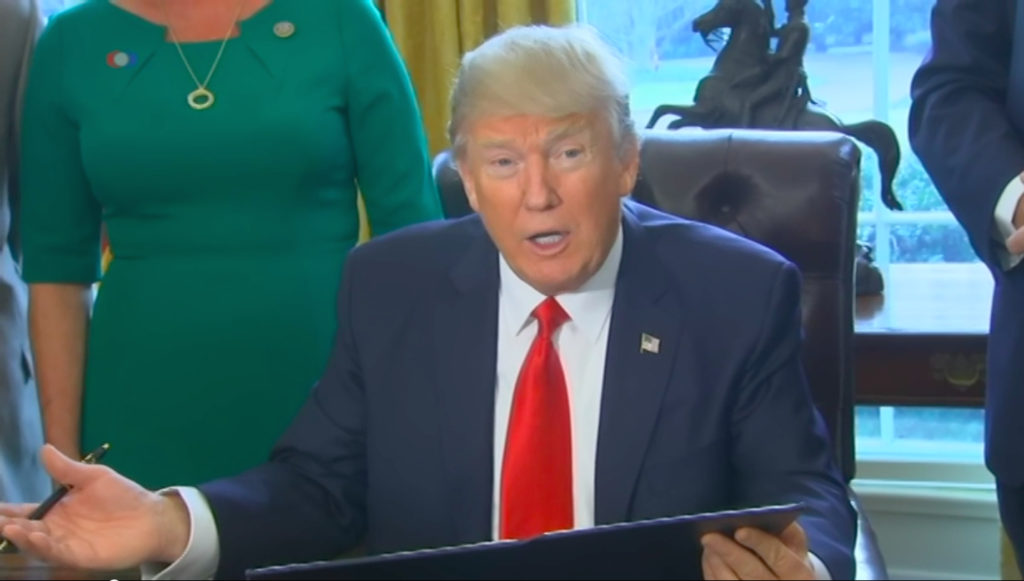 In the first month of his Presidency, Trump has restored “Government Sachs” by bringing former Goldman Sachs bank executives into his corridors of power  and  he has signed an order, as promised in his campaign, to start dismantling Dodd-Frank, the financial regulatory law passed by Congress in 2010 to keep Wall Street’s Super Banks from taking the nation over the financial cliff again, as they did in the 2008 financial collapse.

Which Trump is Talking – Candidate or President?

A couple of weeks ago, at a clubby luncheon for the Wall Street elite and corporate CEOs in the state dining room of the White House, Trump warmly embraced top bankers and promised Wall Street the deregulation it has been hankering after.

In this audience of trickle-down capitalists, President Trump turned ostentatiously for advice to Jamie Dimon, CEO of JPMorganChase, whose bank has paid more than $28 billion in fines and settlements in recent years for toxic securities abuses, money laundering, violations of investor and consumer protections, relying on robo-signers to foreclose on mortgages and mishandling loan modifications. “There’s nobody better to tell me about Dodd-Frank than Jamie,” Trump opined.

“We expect to be cutting a lot out of Dodd-Frank because frankly, I have so many people, friends of mine that have nice businesses, they can’t borrow money,” Trump went on. “They just can’t get any money because the banks just won’t let them borrow it because of the rules and regulations in Dodd-Frank.” 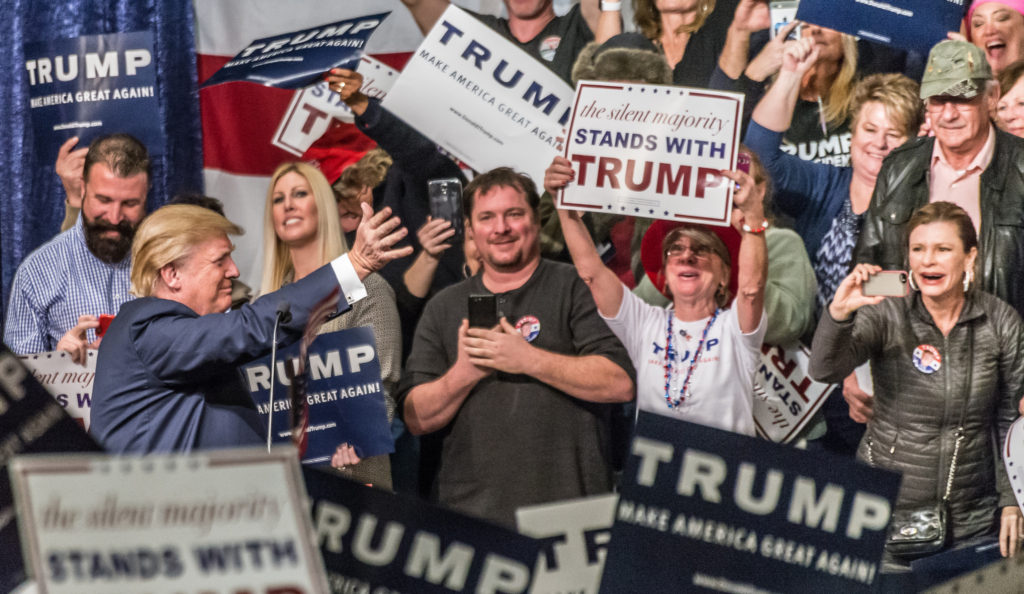 Not only was that at odds with bank lending now at record levels, but it was a far cry from what Candidate Trump told voters in Ottuma, Iowa in January 2016, just before the pivotal Iowa Caucuses that launched his astonishing ascent.

“I know Wall Street. I know the people on Wall Street,” Candidate Trump said in that Iowa stump speech. “I’m not going to let Wall Street get away with murder. Wall Street has caused tremendous problems for us.… I don’t care about the Wall Street guys… I’m not taking any of their money.”

But before the 2016 election was over, Trump’s campaign did take money from Wall Street’s super rich and Trump rewarded several with Cabinet plums. He chose three of the “system-rigging, string-pulling” Goldman Sachs veterans for his inner circle – Steven Mnuchin as Treasury Secretary, Gary Cohn as director of his National Economic Council, and Steve Bannon as his chief strategist and White House Rasputin. 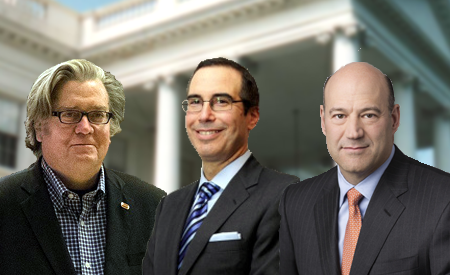 So far, neither the President nor his economic team have spelled out specifically how they intend to ease financial regulations. The president’s executive order merely set out a broad objective.

“The first thing that we are going to attack is regulation, over-regulation,” says Gary Cohn, Trump’s chief economic strategist. “We have to get the United States banking system working again.” As president of Goldman Sachs, Cohn stated in 2015 that among his pet peeves were the increased requirements for capital reserves as a cushion against a financial crisis. Cohn said they were hurting bank growth and profits and lending to small businesses.

Dissent came from Federal Reserve Chairman Janet Yellen in testimony before Congress last Tuesday. Yellen asserted that while some modification of Dodd-Frank regulations might be warranted, she saw “no evidence” that regulations had hurt bank profits or growth, alluding to strong bank profits reported in recent quarters.

Wall Street clearly expects its profits to soar after deregulation, but as Yellen was suggesting, the path that Trump & Co are pursuing is risky for the nation’s economy.

Recent history teaches the high price of trusting the free market to regulate itself. The financial collapse in 2008 followed deregulation of  high flying financial derivatives and the abolition of the Glass Steagall legal barrier between the commercial banks most of us use and the investment banks that trade speculatively in the Wall Street casino.

An early warning about the perils of the market in multi-trillion dollar derivatives, which legendary investor Warren Buffett once called “financial weapons of mass destruction,” came from Brooksley Born, the tough-minded chair of the Commodity Futures Trading Commission.

But she was squelched by Treasury Secretary Bob Rubin, a former Goldman Sachs CEO, and former Fed Chairman Alan Greenspan, also a long-time Wall Streeter. They not only tried to stifle Born’s warnings but got Congress to pass a bill preventing Born’s commission from regulating derivatives. 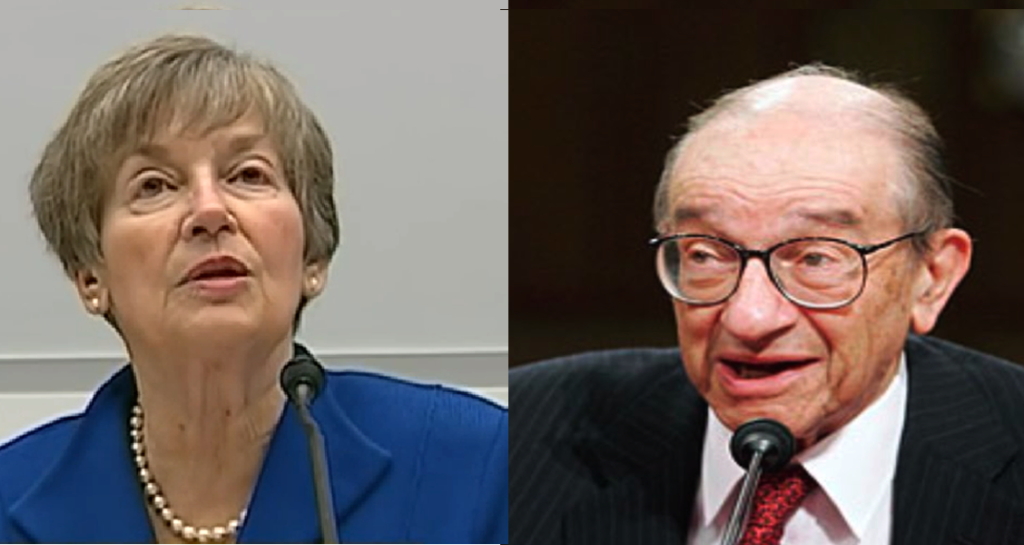 Born was quickly vindicated when Long Term Capital Management, a huge hedge fund deeply invested in derivatives, went under.  But instead of hailing Born’s prescience and adopting her regulations, Rubin and Greenspan eased restraints, trusting Wall Street Mega-Banks to protect themselves from disaster. For Greenspan, then treated as a financial Oracle, trust in the market to self-regulate was an article of faith.

After two Wall Street banks collapsed and the financial markets nose-dived in the fall of 2008, Greenspan confessed to Congress that there had been “flaws” in his free-market economic model. “Those of us who have looked to the self-interest of lending institutions to protect shareholders’ equity, myself included, are in a state of shocked disbelief,” he admitted. “The whole intellectual edifice collapsed.”

In response, the Obama Administration worked with Senator Chris Dodd (D-CT) and Rep. Barney Frank (D-MA) to persuade Congress to pass the Dodd-Frank law imposing new safeguards – regulation of derivatives; a ceiling on proprietary trading by major banks; a Consumer Financial Protection Bureau to shield consumers against predatory lenders; new federal authority to help a failing bank to wind down its operations without sinking the whole system; more oversight and higher reserve requirements.

Even so, Wall Street banks watered down many provisions and now the super banks want even looser regulations. That’s going the wrong way, assert some experienced financial experts. They favor tightening the Dodd-Frank regime.

Shiela Bair, former Chair of the Federal Deposit Insurance Corporation, has warned Trump of the perils of deregulation.  “I hope,” says Bair, “he will pursue a policy of smart regulation not no regulation, because no regulation was what got us into trouble in 2008.”